By the time he was 9, Jerome Lamaar had learned how to seize on his heart’s desire. “I was hoping to get my hands on the Power Ranger Flip Heads,” said Mr. Lamaar, a 35-year-old, Bronx-bred fashion designer. “I never told anyone, but I wanted these toys so bad. I sat in my room holding this scenario in my head of how I would feel when I got them.”

He had, in his New Age-tinctured phrase, “launched his dreams into the universe.” And, as he tells it, the universe heeded his call. “The very next day, my dad got me the Flip Heads,” he said. “That’s when I realized that there was something to this.”

He could not have named it at the time, but Mr. Lamaar says now that he was manifesting — achieving material and psychic rewards through sheer force of mind.

Part magical thinking, part struggle for agency at a time when it is in short supply, the practice he described, an eons-old variant of positive thinking — or at least the term that describes it — has re-entered the mainstream.

Manifesting sits alongside a smattering of belief systems — astrology, tarot, paganism and their metaphysical cousins — being resurrected by a youthful generation in the name of wellness. “For Gen Z in particular, it can be a form of self-soothing,” said Lucie Greene, a writer and trend forecaster in New York. “It’s a way to make sense of things in a moment where nothing makes sense.”

It is especially meaningful, Ms. Greene went on, to those tribes of teenagers and people in their early 20s whose hopes have been flattened or derailed by a pandemic-imposed social and economic malaise. In a such a fraught climate, she said, “it’s cathartic to feel you have some control over your destiny.”

The Law of Attraction

This born-again phenomenon is dismissed in some quarters as little more than a quarantine fad, “like bread baking, tie-dyeing or learning TikTok dances,” as Rebecca Jennings put it in a recent post on Vox. “Shut up I’m manifesting,” she said, “has become one of the defining memes of 2020.”

Its practitioners, in contrast, view it as a coping mechanism, a legitimate alternative that organized religion or psychotherapy may not always provide. The “law of attraction,” a belief that your experiences have a direct correlation to your thoughts, is one aspect of Princess Asata Louden’s spiritual practice. Others include journaling and meditation, which Ms. Louden, a 24-year-old dancer and graduate student at U.C.L.A., likes to perform by candlelight or near an open window.

“I also communicate with my ancestors and spirit guides,” Ms. Louden said, rituals that make her feel “divinely protected and guided.”

“Manifesting has gotten me through all of this pandemic stuff,” said Ms. Louden, who goes by the stage name Sygga. She is not religious but takes on faith “that we have this power to manipulate energy.” 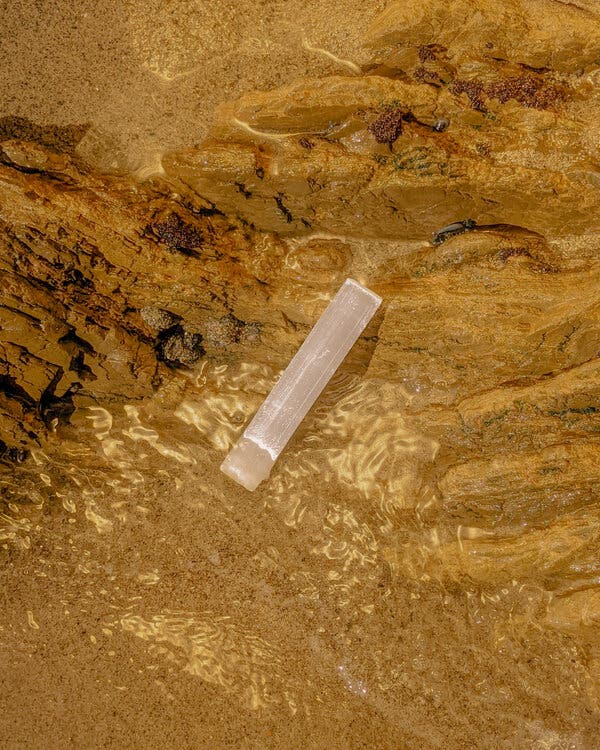 Many of her contemporaries preach a similar gospel of self-realization on YouTube, TikTok and other social platforms. These days the internet teems with their slogans and self-affirmations: “Receiving blessings from the universe like,” or “There’s no competition when you’re manifesting in your own lane.”

Marta Langston, 18, a high school student in Northern California, shares her credo on TikTok and Instagram. “You would be surprised how many people my age that I’ve met are actively using ‘the law of attraction,’” Ms. Langston said. “I really think our generation is here to push this idea into the mainstream — we see it as part of a new enlightenment.”

That concept has a lofty ring. But for some of its youngest adherents, manifesting is just the latest extension of a romance with the gaudy totems of the early aughts. Among them is “The Secret” (recently updated as “The Greatest Secret,” published in November) a wildly popular 2006 self-help bible of an older generation, and a brand in itself, that lured readers with the slick assurance, stating that manifesting “is exactly like placing an order from a catalog.” As its author, Rhonda Byrne, writes, “You must know that what you want is yours from the moment you ask.”

Such a modish, and mercantile, spin on wishful thinking has spawned its own litter of films and self-help guides. There is “The Secret: Dare to Dream,” a Hallmark-worthy fantasy starring Katie Holmes. Rife with the requisite catchphrases — “the more you think about something, the more you draw it to you” — the movie is currently streaming on Amazon.

The law of attraction is tainted as well by an undercurrent of racism, one obvious enough to have spawned its own meme, “Maybe you manifested. Maybe it’s white privilege.”

Manifesting “feels entitled and dirty,” Ruth Anne Stearns posted on Medium, going on to assert that its promise of wealth and abundance is grounded in “the real advantage that you live in this white body, in this time and place that you have tremendous resources which most of the world does not have.”

Manifesting carries an implicit rebuke to members of impoverished or disenfranchised communities, said Denise Fournier, a psychotherapist in Miami. Subtle or not, the message is insidious. “It’s ‘Why aren’t you manifesting a trip to Tulum? Why aren’t we seeing you on Instagram. You must not be a good manifester.’ That’s problematic,” she said.

Some find it selfish, or simply unrealistic. “It can be a way of bypassing the legitimate work of therapy,” said Dr. Fournier, which takes into account the idea of responsibility, discipline and the impact of one’s choices on other people. “What makes it so ‘woo’ is that people want to believe that they can close their eyes and wish for a mega-mansion, that having that having the right crystals can make it happen. But it just doesn’t work that way.”

Gabriele Oettingen, a scholar and professor of psychology at New York University, underscores the point. “Dreamers are not often doers,” she writes in “Rethinking Positive Thinking: Inside the New Science of Motivation,” a study of the sources and perils, of unexamined optimism. “The pleasurable act of dreaming saps our energy to perform the hard work of meeting the challenges in real life.”

Mr. Lamaar finds solace in the practice just the same, partly in the strength to push back against the socioculturally imposed limitations of race and class. That makes it democratic, he suggested: “It’s a muscle that, if you take a moment to be present, everybody can use.”

By the time he was 15, he said, he had visualized his way into the world of style, landing his dream job working alongside the designer Kimora Lee Simmons at Baby Phat, Mr. Lamaar said. More recently he has worked with Samsung, Google, Adidas and Amazon, among others.

Manifesting works for him partly, he said, because he abides by his own somewhat stringent set of rules. “You have to create this memory of a thing as having already happened,” he said. “What was the weather like that day? What were you wearing? Did you receive a call at the time?”

“Manifesting gives people hope, something we’ve lacked during the pandemic,” said Elise Gill, 30, a film producer for an advertising agency in London. Protracted self-seclusion, she said, “has forced us to think a bit more about what we want to do with our lives.”

To Carlos Garbiras, a 36-year-old insurance salesman in Sonoma County, Calif., who grew up in Colombia during a politically turbulent time, the practice provides an emotional safety net. “As an immigrant I was brought up to imagine the world as a dangerous place,” he said. “You grew up distrustful, seeing the bad even when it wasn’t necessarily there.” Manifesting he said, “is asking you to do the opposite. I think of it as a correction.”

Some of his ideas are rooted in New Thought, a movement in the early 19th century that promoted, among other concepts, the idea that divine thought is a force for good and “right thinking” a potential source of healing.

That doctrine was echoed in the mid-20th-century teachings of Norman Vincent Peale, an American clergyman widely known as “God’s salesman,” whose 1952 best seller, “The Power of Positive Thinking,” urged followers: “expect great things and great things will come.”

Among Peale’s cheery bromides, reportedly embraced by Donald Trump’s father, Fred, and later by Mr. Trump himself, is the oft-quoted challenge “Shoot for the moon, and, even if you miss, you’ll land among the stars.”

That idea today has high-profile champions. They include Oprah Winfrey, Gwyneth Paltrow and, most visibly, of late, Marianne Williamson, an early Democratic presidential candidate last year. At the primary debate in Detroit last summer, she urged viewers, in an effusion of mystic-speak, “Say ‘yes’ to what we know can be true.’” Another adherent is Lizzo, who insisted in Marie Claire last summer, “Everything in my life has been a manifestation. Like you really have to speak it.”

She is joined by a rising chorus of internet evangelists offering guidance and healing via Zoom and other virtual platforms. Business has picked up, said Courtney Love Gavin, 34, a life coach in Los Angeles. “I look at this time as being the Super Bowl for the coaching industry,” she said.

Ms. Gavin said that she teaches manifesting but prefers the term “coaching,” because, as she said, “You don’t want to lose people. You want to speak to them in their language.”

Roxie Nafousi, 30, who practices as an emotional health adviser in London, does not apologize for a lack of formal training. “You don’t have to have qualifications to be a manifesting expert,” she said, adding brightly, “Like singers who were born to sing, I was born to help people.”

A year ago, 100 people attended Ms. Nafousi’s manifesting workshop, she said; by November of 2020 400 attended a virtual workshop. “That’s because in recent months we’ve had an opportunity to pause, to look inward and reflect on our lives pre-pandemic, to consider the things we want to change,” she said. “We’ve never had so much time and space for self-development.”

Yet the practice of manifesting remains suspect and associated with youthful self-absorption. “It’s all about me,” said Dr. Fournier, whose treats a number of 15, 16 and 17-year-olds in her practice. She points to “a culture of specialness”: the use of spirituality to create this idea of being exceptional, supremely gifted. The thought is: ‘How can I use my spirituality to serve my own person?’” she said.

Such reservations have yet to put off the most ardent believers, some whom have been projecting themselves conceptually into a covetable living space or long dreamed of destination.

“I have my eye on moving to New York City within a few years,” Ms. Langston said. She isn’t just dreaming, she said. “I get on Pinterest and save photos of what I want my life to look like, pictures of peoples’ decorated apartments, pictures of people wearing outfits, people who look like they belong in the city. I even use Google street views and picture myself in those neighborhoods.”

Ms. Louden’s goals are more circumscribed. “I’m sitting right now, manifesting this apartment that I want in downtown Los Angeles,” she said. She can’t afford the rent, not yet. But to maximize her chances of moving in one day, she makes regular tours of the neighborhood, checks out the local stores and landmarks, writes in her journal and decorates the apartment in her head.

“I have so much faith that this will happen,” Ms. Louden said. Can you fault her? After all, she added calmly, “I manifested the place that I’m living in now.”