MELBOURNE, Australia — When the authorities brought Ramsiyar Sabanayagam to the Mantra Bell City Preston hotel in suburban Melbourne in November 2019, he assumed he would be there for only a few weeks.

Instead, Mr. Sabanayagam, a refugee from Sri Lanka, spent the next 14 months locked inside his room for all but a brief period each day, unsure when his ordeal would end.

He and the other refugees detained in the hotel were ordered to keep their windows shut until, after protesting, they were allowed to crack them open, but no more than four inches. Guards checked on them day and night, sometimes shining flashlights into their faces while they slept. The men could see guests coming and going, and they knew people were gathering with friends and loved ones in the dining hall below, but they had no hope of joining them.

“These hotels are prisons,” said Mr. Sabanayagam, a member of Sri Lanka’s Tamil minority who fled violence in his homeland. “We spend 23 hours a day in our rooms and have one hour walking in the corridor, where there’s no sunshine, no fresh air.”

Over nearly a year of a global pandemic, many people have become acutely aware of what it means to be confined to their homes. But for Mr. Sabanayagam and scores of other asylum seekers who have been held in Australian hotels, these stifling conditions have stretched on for months and months, pushing some to the breaking point. Two have tried to commit suicide.

All of the men had already been detained offshore for several years under Australia’s strict immigration laws before being transferred to the mainland for medical treatment. Even the island prisons, they said, were preferable, because at least they could go outside.

On Wednesday, the Australian authorities, facing increasing criticism, quietly began releasing dozens of the men, including Mr. Sabanayagam. Most seemed shellshocked by their sudden freedom in a country that for years gave them the distinct impression that they were not welcome. 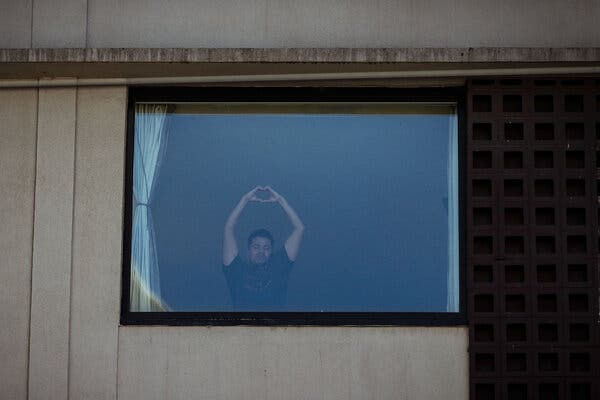 A man in detention at the Park Hotel on Wednesday.Credit…Darrian Traynor/Getty Images

The terms of their release under temporary visas was unclear in many cases, leaving the men unsure whether they would be able to renew their visas when they expire, and perhaps build lives in Australia.

“I’m happy, but it’s a little bit scary,” Emad Moradi, 38, a Kurdish refugee who left Iran in 2013 by boat, said in the hours after his release. He and other refugees were teary-eyed as they tasted their first moments of freedom in years.

The release of the men was one of the Australian government’s largest concessions to the country’s refugee rights movement in recent years. But more than a dozen of the 60 or so men originally detained in the Mantra hotel remain in custody, and some say they have received no news about their visa status or when they might be granted freedom.

At least 100 more, advocates for refugees say, are still in the Kangaroo Point Central Hotel and Apartments in Brisbane, while several others, including a family, are locked up in other motels and apartments or in permanent facilities.

“I’m totally broken down today,” Mohammad Joy Miah, who traveled by boat to Australia from Bangladesh in 2013 and has been in hotel detention for about a year, said on Wednesday. Mr. Miah and others still being held said they were struggling with their emotions after the release of their roommates and friends.

Hamid Reza Yousefi, another asylum seeker, said he was devastated that the Australian government had continued to detain him even after he was offered conditional resettlement in the United States, under a deal reached during Barack Obama’s presidency. “If you don’t like me, send me to America,” he said.

Two of the detainees have tried to take their own lives, activists said. One of them, Thanush Selvarasa, 31, who arrived in Australia by boat in 2013 after fleeing Sri Lanka, said that after being deprived of normalcy for so many years, he had simply lost hope.

Supporters of refugees outside the Park Hotel on Wednesday.Credit…Darrian Traynor/Getty Images

“It’s very hard to be in indefinite detention,” said Mr. Selvarasa, who was moved to a permanent facility after his suicide attempt and is still being detained. “My only dream is freedom.”

Such arrivals are relegated to offshore detention centers on Manus Island in Papua New Guinea and on Nauru, a remote outpost in the Pacific Ocean. Many are given no indication of their prospects, and despair has sparked a rash of suicides and self-harm among the detainees in recent years.

The men being held in hotels — which the Australian government refers to as “alternative places of detention” — were granted permission under a now-repealed law to be transferred from the island prisons for medical treatment in mainland Australia.

Under the law, the men were promised that they would be taken to Melbourne or Brisbane for medical care and then returned to their offshore detention center. But many said they had received little care, if any, after their transfer.

Mr. Sabanayagam, who has had shrapnel lodged in his body since he and his family were attacked in Sri Lanka, said the pain was sometimes so bad that he could not walk. He said he had informed doctors of this before leaving Manus Island, yet when he finally saw a doctor in Australia, accompanied by two security guards, all he was told was that he had shrapnel in his body.

Nick Martin, who from 2016 to 2017 was the chief medical officer on Nauru, responsible for determining which asylum seekers needed medical care in Australia, said the government had been detaining the men in hotels to make an example of them.

Mostafa Azimitabar, right, a Kurdish musician, on a bus with other refugees after leaving the Park Hotel on Thursday. Credit…James Ross/EPA, via Shutterstock

“A lot of them have not received adequate medical treatment still, and the government is sending a message because it has gone hard on refugees and asylum seekers,” Dr. Martin said. “Many will have severe mental health issues after being kept offshore for upward of eight years and then in these hotels.”

Critics of Australia’s offshore detention policy say that it is not only inhumane but ineffective as a deterrent.

“What stopped boats from arriving is not treatment of asylum seekers in Australian lands, but the Australian Navy patrolling the waters off Indonesia, stopping ships carrying migrants,” said Francois Crépeau, a former United Nations special rapporteur on the human rights of migrants.

In an email on Thursday, a spokesperson for the Australian Department of Home Affairs said the government’s policy was “clear that no one who attempts illegal maritime travel to Australia will be permanently settled here.”

“The individuals residing in the alternative places of detention were brought to Australia temporarily for medical treatment,” the spokesperson said. “They are encouraged to finalize their medical treatment so they can continue on their resettlement pathway to the United States, return to Nauru or P.N.G. or return to their home country.”

Activists believe the decision to let the men leave hotel detention was the result of increased public and legal pressure on the government and the hotels.

In December, more than 250 activists, human rights lawyers, politicians and trade unions signed a letter to the chief executive of Accor, which owns the Mantra hotel, calling for the company to end its contract with the government.

Activists have also staged daily rallies outside the hotel, and once a week, they have been sleeping in the park across the street to raise awareness of the men’s plight.

In mid-December, the men at the Mantra were moved to the Park Hotel Melbourne. That hotel became infamous last year when botched management of quarantine for returning travelers helped lead to a severe coronavirus outbreak — and ultimately one of the harshest lockdowns in the world — in Melbourne.

On Wednesday evening, protesters gathered outside the Park Hotel for what they hoped would be the last time. Above them, on the fifth floor, Mostafa Azimitabar, a Kurdish musician, waved, using the light of his cellphone to pierce through the darkened windows.

He and other men said they felt cautiously hopeful for the first time in many years.

“I want to breathe.”