CHEYENNE, Wyo. — Liz Cheney was getting so many questions from constituents and colleagues about whether she would vote to affirm the 2020 election results that she responded in a way befitting her background as a State Department diplomat and lawyer: She issued a 21-page memo detailing the constitutional and legal reasons Congress should not interfere with certification.

Doing so, she wrote, would set “an exceptionally dangerous precedent” that no Republican should want to be associated with.

Ms. Cheney was right about the danger. But she was wrong about the willingness of her fellow Republicans to go along with it. In the House, two-thirds of them voted against certification. A week later, only nine others voted with her to impeach former President Donald J. Trump for encouraging a mob of his supporters to besiege the Capitol on Jan. 6.

Now Ms. Cheney, the lone representative for Wyoming and the No. 3-ranking Republican in the House, is the most visible and imperiled target of the pro-Trump majority in the G.O.P., which wants to make actions like hers a disqualifying offense for any party member seeking office. A campaign backed by members of Mr. Trump’s family and some of his allies in Congress threatens to force her out of her position in House leadership. On Wednesday in Washington, she will attend a private House Republican meeting where lawmakers will have the opportunity to confront her in person.

At home in Wyoming, the sense of betrayal among Republicans is burning hot at the moment. It’s especially acute among the conservative grass roots and local party activists whose strong presence in the state helped deliver Mr. Trump his largest margin of victory anywhere — beating Joseph R. Biden Jr. with 70 percent of the vote.

At least one conservative state lawmaker — who described the impeachment vote as “an ice pick in the back” by Republicans who supported it — has printed “Impeach Liz Cheney!” yard signs and is vowing to challenge her in 2022. Ten county-level Republican Party organizations have voted to censure Ms. Cheney in recent days, and more are expected to follow suit.

People close to Ms. Cheney, who insisted on anonymity so they could discuss her private views, said that her break with the pro-Trump faction reflected her belief that many more Republicans share her disgust with how seriously Mr. Trump undermined confidence in the country’s electoral system.

As she watched Mr. Trump and his supporters peddle conspiracy theories and promote what she called “the big lie,” Ms. Cheney became deeply unsettled by how many of her colleagues seemed so cavalier about Mr. Trump’s actions, friends and associates said. She was also bothered by the way Republicans cheered and mimicked the kind of behavior she expected of a foreign authoritarian leader but never from an American president. 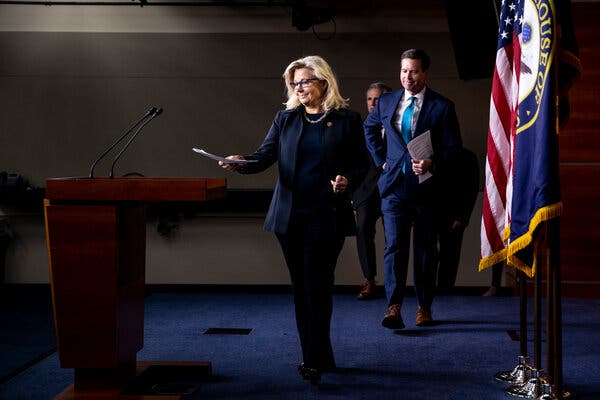 In conversations with colleagues, Ms. Cheney, 54, has said she hopes her example makes more Republicans in and out of public office comfortable acknowledging that they should have pushed back earlier.

Her allies said that attempts to punish her were counterproductive at a time when the party should be united in opposition to Democratic control of Washington.

“The beneficiaries of Republican fratricide are Democrats,” said Karl Rove, the former Bush strategist, who is close to the Cheney family. “So the more we have purity tests and everyone has to think and act alike, particularly when it comes to former President Trump, it’s only helping Democrats.”

But many of her constituents see no problem with making an example of her.

A rally outside the State Capitol last week headlined by Matt Gaetz, the Florida congressman and Trump loyalist, drew several hundred people. They chanted “No more Cheney!” and cheered as Mr. Gaetz ripped into “Never Trump” Republicans, calling them relics from a party that Mr. Trump has transformed from its days under the leadership of the Bushes and Ms. Cheney’s father, former Vice President Dick Cheney.

“We control the true spirit and identity of America,” said Mr. Gaetz, who is leading the effort to oust Ms. Cheney from the House leadership.

After his speech, Teresa Kunkel, a retired state employee, said that she had attended the rally because, as a Christian, she did not believe Ms. Cheney was being an honest representative for Wyoming. “She didn’t represent what we voted for,” Ms. Kunkel said. “She betrayed us — big time.”

The second impeachment of Mr. Trump last month, which Ms. Cheney supported, was an injustice, Ms. Kunkel added. “It’s like: ‘I didn’t like what you did, so you’re out. And we’re in the majority, so we can do that.’ That’s cancel culture,” she said.

Still, the push for Ms. Cheney’s removal from leadership — a step that lawmakers rarely take against members of their own party — may not foreshadow the end of her political career in Wyoming, where the Cheney family is still widely respected.

The fondness with which residents speak of Ms. Cheney’s father, and the esteem he still brings to this state that is home to only 580,000 people, suggest that many voters will grant Ms. Cheney, now entering her third term, a degree of independence from Mr. Trump that other Republicans don’t enjoy.

The campaign to censure her has also triggered a very different response from moderate Republicans who feel more at home in the party of the Bushes and the Cheneys than they do in the party of Trump. These Republicans — both elected officials and private citizens — say the ugliness and vitriol that Trump supporters have displayed since the election has led them to have an overdue reckoning.

“At first I was really mad at Liz,” said Amy Edmonds, a Republican from Cheyenne who is friendly with Ms. Cheney. “I thought she was rushing it. And I thought the election wasn’t fair.”

But after she spoke with Ms. Cheney — and read the 21-page memo at the congresswoman’s insistence — Ms. Edmonds said she came to believe she was dead wrong in believing Mr. Trump’s allegations of election fraud.

Since her epiphany last month, Ms. Edmonds said, she has apologized to two friends she fought with who had tried to tell her that the election wasn’t rigged. And now she spends time thinking about how to engage other friends who promote false stories and disinformation about election fraud on Facebook.

She admits that she hasn’t been very persuasive so far, and finds that when she sends people articles from reliable news sources that debunk Mr. Trump’s false claims, “They’ll write back and say, ‘Well, this is mainstream media.’”

That’s a reflection of how durable Mr. Trump’s hold on Republican voters remains — and how difficult it will be for politicians like Ms. Cheney to convince Trump supporters that they have bought into “the big lie” of a stolen election, as she has privately described it to colleagues.

Amy Edmonds said that after speaking to Ms. Cheney, she saw how wrong she had been to believe Mr. Trump’s allegations of election fraud. Credit…Daniel Brenner for The New York Times

Ms. Cheney is, of course, in a much more difficult position than other Republicans who want their party to move past the most divisive aspects of Mr. Trump’s presidency. Her family legacy makes her, to some, an asset as a symbol of the more traditional conservative Republicanism, and the value it places on career public service, embodied by the Bushes and her father.

But that also makes her a target for Trump loyalists who reject that tradition as the very culture that Mr. Trump claimed he would root out from Washington.

Kim Small, who attended the rally at the capitol in Cheyenne last week, said of Ms. Cheney, “I honestly feel like she’s what we consider ‘the swamp.’” She said she attended the rally because she felt Ms. Cheney’s criticisms of Mr. Trump “put her at odds with the vast majority of her constituents.’’

Ms. Cheney’s allies described her as at peace with the stance she has taken on Mr. Trump. Representative Adam Kinzinger of Illinois, one of the nine other Republicans who voted to impeach Mr. Trump, said that too many of his colleagues were doing the opposite of what Ms. Cheney is.

“They’re waiting to see if Trump collapses,” he said. “And then if he does, they’ll be like, ‘I’ve never been with Trump, ever.’” He described the effort to punish Ms. Cheney as “cancel culture on the right.”

The more difficult but ultimately meaningful path, Mr. Kinzinger said, is if Republicans signal that they don’t care about the pressure, the hostility and the possibility of political defeat.

“I’m willing to not win a re-election over this,” he said. “People need to see examples of others doing this, speaking out. And damn the consequences.”