That was the prevailing mood in Canada this week after the inauguration of President Joseph R. Biden Jr. and Vice President Kamala Harris.

After four years of being insulted, threatened, dismissed and slapped by the Trump administration, shellshocked Canadians felt the once-familiar warmth of their neighbor and closest ally, the United States. Of all the world leaders with whom Mr. Biden has to kiss and make up, Canada’s prime minister, Justin Trudeau would be first to get an official call, on Friday, his administration announced.

The profound sense of relief that the American election evoked across Canada was further deepened by President Biden’s inaugural speech, in which he promised to repair alliances and engage with the world not through force, but partnership.

But, as is often the case with make-ups, it will take some time to rebuild trust and resolve differences between the two countries. And the United States is a very different place than it was four years ago: deeply divided, sick and weakened by the coronavirus, with a protectionist economic outlook that Mr. Biden has adopted.

It also didn’t help that one of his first moves was to cancel the Keystone XL — a proposed pipeline meant to carry crude oil from Alberta to Nebraska that the Canadian oil industry hoped would revive its sinking fortunes.

“It was not a friendly first act,” said Roland Paris, a professor of international affairs at the University of Ottawa, and a former foreign policy adviser to Mr. Trudeau. But, he added, “Just knowing the occupant of the White House will treat Canada as a respected friend makes a huge difference.”

Canada has long considered itself a close cousin to the United States. The two countries share a similar colonial history, immigrant population, defense network, economic supply chains and culture. Two-thirds of Canada’s sparse population live within 60 miles of the American border, and, before the pandemic, crossed it regularly to shop and visit family. “We’ve forged a bond that is beyond practical,” said Allan Rock, a former longtime minister in the Canadian government. “It borders on mystical.”

As with any family, there have been disagreements, and Canadians have often felt overlooked by their much larger neighbor. But in modern history, nothing has approached the blowups instigated by Mr. Trump.

He slapped tariffs on Canadian products, threatened to rip up the country’s most important trade deal and insulted Mr. Trudeau as “very dishonest and weak.” His trade adviser Peter Navarro went further, suggesting “there’s a special place in hell” for Canada’s prime minister.

Few Canadians were sad to see the Trump administration go. 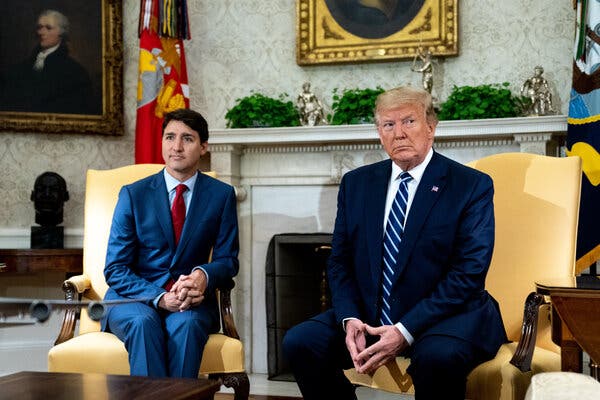 “There is actually a special place in hell for Trump,” said Gary Doer, a former Canadian ambassador to Washington and Manitoba premier.

Mr. Doer is among the many Canadians who expect the return of that once-special relationship under a Biden administration. Some even envision Canada helping the United States mend other relationships. But, the pictures of a mob breaking into the Capitol, and the deep and ugly divisions it revealed, is a source of worry for many.

If America’s “rift becomes more rancorous and deeper, then we are in trouble,” said Kathleen Wynne, the first female and openly gay premier of Ontario, Canada’s most populous province. Far-right activists have been emboldened in Canada too, she noted, recalling being followed and harassed by “very, very hard core right-wing angry men” during her 2018 re-election campaign, which she lost.

“We need to see that dissipate in the United States. That’s Biden’s first order of business,” she said. “To take a breath, and not preach to people, but try to figure out how to weave back the social fabric” of the country.

Mr. Trudeau and Mr. Biden have a warm history. The prime minister hosted a farewell state dinner for the then outgoing vice president four years ago, after Mr. Trump’s victory. Mr. Biden gave a speech then, during which he said it was up to Canada to be the defending champion of the “liberal international order.” He ended with a toast: “Vive le Canada. Because we need you very, very badly.”

Both leaders have made combating climate change, defending human rights and strengthening international institutions central to their platforms.They built their political personas on inclusivity and social justice — although at 49, Mr. Trudeau is a generation younger than Mr. Biden.

Mr. Rock, who also served as Canada’s ambassador to the United Nations, said he hoped that Mr. Trudeau would offer his assistance to Mr. Biden, in rebuilding American relationships around the world. “Their first conversation, I hope includes the words, ‘How can we help?’” said Mr. Rock. “We aren’t the ones who behaved as Mr. Trump did. We have reasonable currency in the capitals of the world.”

Some in the country worried Mr. Biden’s proposed protectionist economic policies could damage the Canadian economy so intrinsically dependent on the United States. But, even Conservative Canadian politicians anticipate a renewed and strengthened relationship.

Alberta premier Jason Kenney, who called the cancellation of the Keystone XL pipeline a “gut punch,” welcomed the new administration, adding that his province had “the deepest economic ties to the United States and strong social connections that go back well over a century.”

When inevitable disagreements arise with the Biden administration, most Canadian politicians expect a return to rational and respectful discourse, which after years of dodging grenade attacks over Twitter, would seem a balm.

“I can’t wait to go back to Washington, DC to work with the new Administration and Congress on our common interests,” tweeted Flavio Volpe, the president of the Auto Parts Manufacturers Association, who spent four years working with the Canadian government to renegotiate the North American Free Trade Agreement.