They built back better. From the moment that President Joseph Biden and Vice President Kamala Harris arrived at the reflecting pool beside the Lincoln Memorial on Tuesday night to the final note of the virtual concert that capped the inaugural rites and celebrations, it was clear that they, and those around them, were going to use every tool at their disposal to underscore their message of fresh starts and racial justice, help and healing. They would use every celebrity performer, every ritual and, yes, every dress and coat and suit that could set off a search, spark a trend or capture an imagination.

Even though in the run-up to the transition of power, the message from both the presidential and vice-presidential camps was that they did not want to focus on clothes (even though the brands involved had been sworn to secrecy), it was impossible to ignore how the new administration used what they wore to tell a story in a moment when the eyes of the world were on them.

It was writ in the range of designers represented, in the rainbow of colors that could be seen through any screen, in the layers of not just garments (hey, it was chilly), but meaning. And in the way the choices worked together to create a mosaic that wasn’t really about fashion at all, but rather about values and signifying intent. 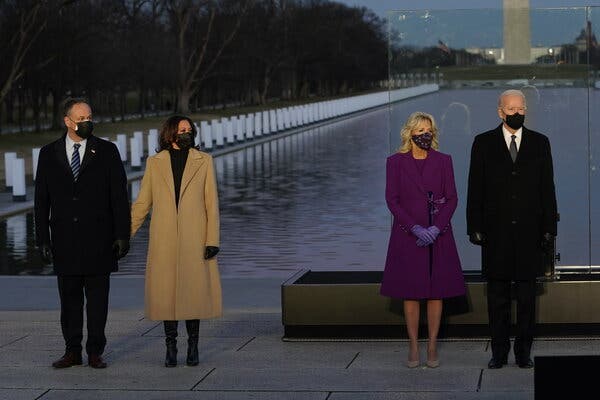 The fashion was just the conduit.

Mr. Biden made his Inauguration Day entrance in a Ralph Lauren suit, coat and mask — in, that is to say, a wardrobe by a Bronx-born designer who built his reputation on channeling the mythology of the American dream. Who, indeed, embodied it himself; who has dressed the United States Olympic team, helped restore The Star-Spangled Banner and worked with administrations both Democratic and Republican over the years. Who represents bipartisan tradition and heritage and industry.

With it, the president wore a blue tie (not so much a bright Democratic blue as a “true blue” blue) that harmonized with the blue tweed coat, dress and mask worn by Dr. Jill Biden. Her outfit had been created by Markarian, a brand founded only three years ago by a young designer named Alexandra O’Neill. Based in New York’s garment district, it was so fresh, it left even fashion folk scratching their heads.

Then there was Ms. Harris, who showcased the work of a different young Black independent designer in each of her inaugural appearances. If, as the first female vice president and the first Black woman vice president, she represents change and the future, so, too, did those choices. If she and Mr. Biden were planning to use their first 100 days to put a new stimulus plan into action, she was using her first actual day to put her wardrobe where their words were.

First came the camel coat worn to the Covid memorial service, with its multitude of pleats falling from a wave at the back. It was created by Kerby Jean-Raymond of Pyer Moss, a designer dedicated to putting Black Americans back at the center of the country’s cultural fables. He was among the first designers to organize distribution of PPE at the beginning of the coronavirus pandemic, as well as to raise money to help small businesses crushed by lockdown.

Next was the bright purple coat and dress at the swearing-in designed by Christopher John Rogers, worn with Ms. Harris’s signature pearls (these from the Puerto Rican jeweler Wilfredo Rosado) and the politico’s little flag pin. Born in Louisiana, based in New York, and still in his 20s, Mr. Rogers has a penchant for combining old-time dressmaker detailing with high-octane glamour. And finally, for the evening, there was the black sequined dress under a tuxedo coat by Sergio Hudson, a designer working and manufacturing in Ms. Harris’s home state of California.

So it went. There were numerous striking style moments: the red, white and blue celebrity troika of Lady Gaga in a giant Schiaparelli ball gown, Jennifer Lopez in snowy Chanel and Garth Brooks in jeans; the sunshine yellow Prada coat of Amanda Gorman, the youth poet laureate; Senator Bernie Sanders’ viral mittens. But most striking of all was the ubiquity of purple, which turned out to be practically the signature color of the inauguration.

Perhaps because it combines the red and blue of recent political schism into a unified whole (the theme of inauguration was, after all, “America United’). Perhaps because, along with white, it was one of the colors of the suffragists, and to wear it was to acknowledge the fulfillment of their dream embodied by Ms. Harris. Or perhaps because, as the National Woman’s Party (the original suffragist organization) wrote in a 1913 newsletter, “Purple is the color of loyalty, constancy to purpose, unswerving steadfastness to a cause.”

Dr. Jill Biden wore purple to the Covid memorial service — a purple coat and dress and mask from Jonathan Cohen, a next generation independent designer with a focus on sustainability, another Biden priority. And on Wednesday, it was also worn by Mrs. Clinton (her grape pantsuit was another Ralph Lauren) as well as Michelle Obama, whose wide plum trousers belted with a gold buckle, coordinated turtleneck and sweeping greatcoat, all also by Sergio Hudson, called to mind a sort of soignée superhero.

This was more than a restoration of norms, after Melania Trump had effectively trampled on the classic support-American-business-by-wearing-American practice of first ladies past. (Mrs. Trump even left the White House in a symphony of European luxury labels: Chanel jacket, Dolce & Gabbana dress, Hermès bag.) It was an acknowledgment that when it comes to fashion and politics, it’s not just about the first lady or even the first spouse, but everyone in the public eye. It’s not just about made in America, but morality in America. They saw tradition, and raised it one.