WASHINGTON — After announcing her departure from the Trump administration in the middle of the Jan. 6 assault on the Capitol, Sarah Matthews, a deputy White House press secretary, kept running into the same question as she worked her contacts to find a new job: What was it like?

Ms. Matthews turned the answer to that question into a strategy to succeed in a job market not exactly clamoring for former Trump administration aides — presenting her experience in President Donald J. Trump’s press office as essentially a daily lesson in crisis communications, and a marketable asset.

“In general, you would think that working in the Trump White House would kind of show how battle-tested you are,” Ms. Matthews, who plans to stay in Republican politics, said in an interview. “It shows that you can survive one of the most high-pressure jobs.”

However they choose to spin their experience, the decision to stay in the Trump White House to the very end will create headwinds for some former officials, especially those who lasted until a presidency defined by grievance went out in violence. Mr. Trump may have jetted off to Florida urging those he left behind to “Have a nice life,” but the stigma of his political brand will not be so easy for his former aides to escape, particularly the high-profile ones, or anyone who had any hopes of moving beyond the Trump realm.

“The longer they stayed, the more vocally they defended the president’s policies, the harder it will be to find work after this,” Miles Taylor, the former chief of staff at the Department of Homeland Security, who anonymously wrote a book condemning the Trump administration, said in an interview. “There were very few people toward the end whose intent was to hold the president accountable.”

Even famously friendly landing spots are at least temporarily closing their gates: Kayleigh McEnany, Mr. Trump’s last press secretary, was negotiating a job at Fox News — and the word was it was for a big contract — when those talks were put on pause in the weeks after the election.

“Kayleigh McEnany is not currently an employee or contributor at Fox News,” a spokeswoman wrote in an email.

So Ms. McEnany has moved to Florida.

The post-Trump job search looks a little more like “Hunger Games” than “Wall Street,” and that is not typical. Working in the White House has usually meant punching a golden ticket to lucrative positions at lobbying firms, in business or at a college or university.

Jay Carney, one of President Barack Obama’s press secretaries, is the archetype. A career journalist before joining the Obama administration, he is now a senior vice president of Amazon. But finding a job after working for Mr. Trump is different.

“It’s going to be difficult transitioning out of that administration into the private sector,” Brian McCormick, an executive vice president of the McCormick Group, an executive staffing agency, said in an interview, taking what he called the Trump administration’s treatment by the news media into account.

But he said that aides to any departing White House generally have a tough time finding their next role if another party assumes power. “Republicans aren’t going to be high on the list when someone’s looking to hire a lobbyist as part of their staff,” he said.

According to a dozen former officials, the choices are now roughly these: Stay in Mr. Trump’s direct orbit, as a cluster of advisers have done, or try to find a job in a corner of the political ecosystem that is sympathetic to him.

And then there are businessmen like Mike Lindell, the “MyPillow guy” and one of Mr. Trump’s most fervent supporters.

But Mr. Lindell, at least, is not yet offering a soft landing: “I am focused on the machine election fraud being exposed” instead of hiring matters, Mr. Lindell wrote in a text message, repeating a baseless theory around President Biden’s victory.

Others with a higher degree of exposure, or who created or defended some of Mr. Trump’s most contested policies, are still on the hunt.

“For now,” Stephen Miller, one of Mr. Trump’s best-known, if not notorious, aides, wrote in a text message, “you can just say I’m focused on a variety of projects to advance the America First agenda.”

It is an open question how Mr. Miller, the architect of Mr. Trump’s immigration policy and among the Trump loyalists not yet barred from Twitter, will fare in the job market. But in the meantime, Mr. Miller has been busy publicly attacking Mr. Biden’s immigration policies. He has signaled that he will be doing so in a formal way in the future.

The day after a pro-Trump mob rampaged the Capitol, Randall Lane, the chief content officer and editor of Forbes, proposed a more punitive approach to former aides like Mr. Miller. He wrote an op-ed encouraging companies not to hire Mr. Trump’s former White House aides at all.

“Don’t let the chronic liars cash in on their dishonesty,” Mr. Lane wrote. “Press secretaries like Joe Lockhart, Ari Fleischer and Jay Carney, who left the White House with their reputations in various stages of intact, made millions taking their skills — and credibility — to corporate America. Trump’s liars don’t merit that same golden parachute.” 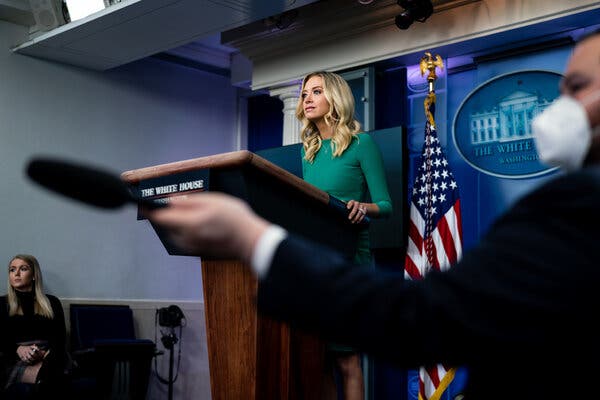 Kayleigh McEnany, President Trump’s final press secretary, was negotiating a contract job at Fox News, but those talks were put on pause in the weeks after the election.Credit…Erin Schaff/The New York Times

Several of the people Mr. Lane mentioned in his piece have in fact stayed firmly planted in the Trump orbit, including Sarah Huckabee Sanders, a former White House press secretary, who is running for governor of Arkansas.

So have others like Mark Meadows, Mr. Trump’s former chief of staff, who has joined a “networking hub” for conservatives, and Judd Deere, a former deputy press secretary, and Julia Hahn, a former deputy communications director, who both took jobs with Senator Bill Hagerty, a freshman Republican from Tennessee.

Others still are weighing their options.

Hope Hicks, a senior adviser who left the White House in 2018 and did get a major job as Fox Corporation’s chief communications officer before returning in March, has told people close to her that she plans to take an extended vacation.

Hogan Gidley, a former White House deputy press secretary and campaign spokesman whose duties recently included calling Mr. Trump the “most masculine” president in American history on Fox News, said he was considering “various things” and that he was not worried about the search ahead of him.

“I think it’s overblown,” Mr. Gidley said about the challenges he and his colleagues might face in the coming months. But then he paused. “Let me put it this way: I hope it’s overblown.”

While former aides contemplate their future in Washington, a small group of advisers will be staying by Mr. Trump’s side in Florida, assisting him in establishing his post-presidency presence.

The group of loyalists who have followed him includes Dan Scavino, a former White House deputy chief of staff for communications, and Nick Luna, Mr. Trump’s former body man. A wider group of aides, including Brian Jack, the former White House political director, are considering staying on in Trump land, but have not made final decisions yet.

Others, including Margo Martin, a former aide in the press office, and Molly Michael, an assistant to Mr. Trump, are government employees, paid for by the General Services Administration, and will help Mr. Trump with the transition process.

Over the weekend, as her former colleagues dealt with the cold reality of living in a Washington where the Democrats are now in charge, Ms. Martin posted a photo on Instagram of her surroundings at Mar-a-Lago, Mr. Trump’s sun-drenched resort in Palm Beach, Fla.