WASHINGTON — It was New Year’s Eve, but the Justice Department’s top leaders had little to celebrate as they discussed Jeffrey Clark, the acting head of the civil division, who had repeatedly pushed them to help President Donald J. Trump undo his electoral loss.

Huddled in the department’s headquarters, they noted that they had rebuked him for secretly meeting with Mr. Trump, even as the department had rebuffed the president’s outlandish requests for court filings and special counsels, according to six people with knowledge of the meeting. No official would host a news conference to say that federal fraud investigations cast the results in doubt, they told him. No one would send a letter making such claims to Georgia lawmakers.

When the meeting ended not long before midnight, Acting Attorney General Jeffrey A. Rosen hoped that the matter was settled, never suspecting that his subordinate would secretly discuss the plan for the letter with Mr. Trump, and very nearly take Mr. Rosen’s job, as part of a plot with the president to wield the department’s power to try to alter the Georgia election outcome.

It was clear that night, though, that Mr. Clark — with his willingness to entertain conspiracy theories about voting booth hacks and election fraud — was not the establishment lawyer they thought him to be. Some senior department leaders had considered him quiet, hard-working and detail-oriented. Others said they knew nothing about him, so low was his profile. He struck neither his fans in the department nor his detractors as being part of the Trumpist faction of the party, according to interviews.

The department’s senior leaders were shocked when Mr. Clark’s machinations came to light. They have spent recent weeks debating how he came to betray Mr. Rosen, his biggest champion at the department, and what blend of ambition and conviction led him to reject the results of the election and embrace Mr. Trump’s claims, despite all evidence to the contrary, including inside the department itself.

The plot devised by Mr. Clark and Mr. Trump would have ousted Mr. Rosen and used the Justice Department to pressure lawmakers in Georgia to overturn the state’s election results. But Mr. Trump ultimately decided against firing Mr. Rosen after top department leaders pledged to resign en masse.

Mr. Clark declined to comment for this report, but he reiterated his assertion that The New York Times’s account of his conversations with Mr. Trump, first reported on Friday, and his colleagues was inaccurate. He said he could not detail those inaccuracies because of legal privilege issues. And he said all of his official communications “were consistent with law.” 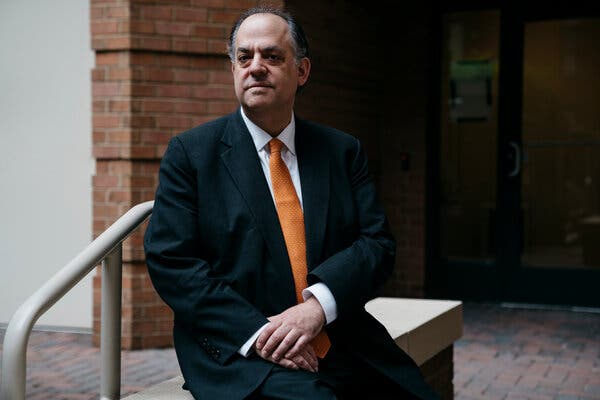 “The story kind of shocked me because this is not the Jeff that I know,” said Theodore H. Frank, a friend and former colleague. Credit…Justin T. Gellerson for The New York Times

Some of his friends said that those who told the press about his final days at the Justice Department painted a picture of a man they do not recognize.

“The story kind of shocked me because this is not the Jeff that I know,” said Theodore H. Frank, a friend and former colleague. “I know Jeff as a guy who really cares about the rule of law and, you know, just a rumpled, thoughtful lawyer who is an intellectual — not a Machiavellian backstabber.”

Mr. Clark had spent two years leading the Justice Department’s environmental division, where he was seen as a standard Republican lawyer political appointee — a member of the conservative Federalist Society with a skepticism of rules that cut into corporate profits.

But now, Mr. Clark, 53, has become notorious. A person who has worked closely with Kirkland & Ellis, where Mr. Clark spent most of his career outside two stints in the George W. Bush and Trump Justice Departments, said there appeared to be scant chance that the law firm would rehire him.

Friends and critics alike reject the notion that Mr. Clark is an operator, describing him as “nerdy” and “thoughtful.”

Mr. Frank, who met Mr. Clark when both worked at Kirkland & Ellis in the 1990s and described himself as a Federalist Society member who voted for President Biden, said he was reserving judgment about the incident. Others were more direct.

“This is the first wave of character assassination, of people going after the most effective lawyers in the Trump administration,” said Mandy Gunasekara, who worked with Mr. Clark when she worked at the Environmental Protection Agency in the clean air division and as chief of staff to Andrew R. Wheeler when he was the agency’s administrator. She was struck by the fact that Mr. Clark’s colleagues were so upset and fixated on an event that ultimately did not happen. Mr. Trump, after all, did notreplace Mr. Rosen with Mr. Clark or have the Justice Department contact Georgia lawmakers.

She said Mr. Clark was most likely discussing with his colleagues and the president “a range of options,” just as he was known for doing in his work advising her agency.

Some of Mr. Clark’s associates said he could be pedantic. As a manager, he made no effort to hide when he had little respect for his career subordinates’ opinions.

He is not known for being understated on the topic of himself. Where the typical biography on the Justice Department website runs a few paragraphs, Mr. Clark’s includes the elementary school he attended in Philadelphia, a topic he debated in college and that he worked for his college newspaper, The Harvard Crimson.

After graduating from Harvard in 1989, Mr. Clark earned a master’s degree in urban affairs and public policy from the Biden School of Public Policy at the University of Delaware in 1993 and a law degree from Georgetown University in 1995. He clerked for an appeals court judge, Danny Boggs, who was known for giving prospective clerks quizzes that tested not just their knowledge of the law, but also a range of esoteric trivia.

Mr. Clark then worked for Kirkland & Ellis from 1996 to 2001, followed by a stint in the Justice Department’s environmental and natural resources division during the Bush administration, before returning to Kirkland in 2005 as a partner, but not one with an equity stake in the firm, according to a person who worked closely with him at the law firm.He held the title of “non-equity partner,” which meant that he did not share in the firm’s profits or make leadership decisions.

When Mr. Clark returned to the Justice Department as the head of the environmental division in 2018, he flew under the radar. Like other Republican officials, he narrowly interpreted the division’s legal authority and had a typically tense relationship with career lawyers when it came to enforcing anti-pollution laws.

In one instance, Mr. Clark held up Clean Water Act enforcement cases because of a pending matter before the Supreme Court that career lawyers felt did not directly relate to their work, according to a lawyer with knowledge of those cases. The Supreme Court was hearing a matter that involved discharges that flowed through groundwater before reaching waters regulated by the federal government, and the department was working on a case that involved flows over land.

His employees believed that Mr. Clark hoped the court would curtail the law’s reach in a way that would apply to overland spills, too,but by a 6-to-3 ruling, it did not.

In a different case, he disagreed with a recommendation that the civil division made to the Office of the Solicitor General, and ultimately got his way after asking the general counsels of other agencies to also push back on the recommendation. Civil division employees said he did not tell them that he would do this, and felt that had circumvented the proper process.

While Mr. Clark oversaw environmental cases, sometimes working late into the night and personally reviewing briefs, the department’s civil division was in turmoil. Its leader, Jody Hunt, sometimes clashed with the White House Counsel’s Office and, later on, with Attorney General William P. Barr, over how best to defend the administration.

Mr. Hunt resigned with no warning in July, leaving his deputy to run the division while Mr. Barr and Mr. Rosen searched for an acting leader among the department’s thinned-out ranks. Mr. Clark wanted the job, which was a considerable step up in stature, and Mr. Rosen supported the idea even though he was already a division head, according to three people with knowledge of the situation.

After he took the helm of the civil division in September, colleagues began seeing flashes of unusual behavior. Mr. Clark’s name appeared on eyebrow-raising briefs, including what would turn out to be an unsuccessful effort to inject the government into a defamation lawsuit against Mr. Trump by a woman who has said he raped her more than two decades ago. He also signed onto an attempt to use the Justice Department to sue a former friend of the first lady at the time, Melania Trump, for writing a tell-all memoir.

He made clear to lawyers who produced draft briefs that they must spell out his name in full, Jeffrey Bossert Clark, according to a former official.

Others said he mounted an idiosyncratic push to remove the word “acting” from his official title — acting assistant attorney general of the civil division — citing an old department legal opinion from the 1980s. Officials denied his request.