JERUSALEM — In the most extensive real-world test so far, Israel has demonstrated that a robust coronavirus vaccination program can have a quick and powerful impact, showing the world a plausible way out of the pandemic.

Cases of Covid-19 and hospitalizations dropped dramatically among people who were vaccinated within just a few weeks, according to new studies in Israel, where a rapid vaccine rollout has made it a kind of test laboratory for the world. And early data suggests that the vaccines are working nearly as well in practice as they did in clinical trials.

“We say with caution, the magic has started,” tweeted Eran Segal, a quantitative biologist at the Weizmann Institute of Science and co-author of a new study on the vaccine’s impact in Israel.

The hopeful news on vaccines is hardly a free ride to a post-pandemic future.

As the world races to curb the virus before more dangerous mutations spread, dire vaccine shortages may prevent other countries from replicating Israel’s success, or from stopping new variants from emerging.

Even Israel, which has outpaced every other nation in vaccinating its people, is far from out of the woods. The country extended its third nationwide lockdown on Thursday.

Still, researchers found hope in the vaccine’s ability to quickly drive down cases among Israelis getting the shots.

“I find this pretty persuasive that we are seeing actual effects of population-level vaccination,” said William Hanage, an epidemiologist at the Harvard T.H. Chan School of Public Health who was not involved with the Israeli study.

The real-world news from Israel adds to other signs of hope after months of bleakness. A growing number of vaccines are showing strong efficacy against Covid-19 and are particularly protective against severe illness. Some trials suggest that vaccines might even have the potential to slow transmission of the virus.

The new Israeli study looked at national health statistics for people 60 years and older, who received the Pfizer-BioNTech vaccine first because of their high risk. Analyzing data from six weeks into the vaccination campaign, when the majority of people that age had been vaccinated, they found that the number of new Covid-19 cases dropped by 41 percent compared to three weeks earlier. 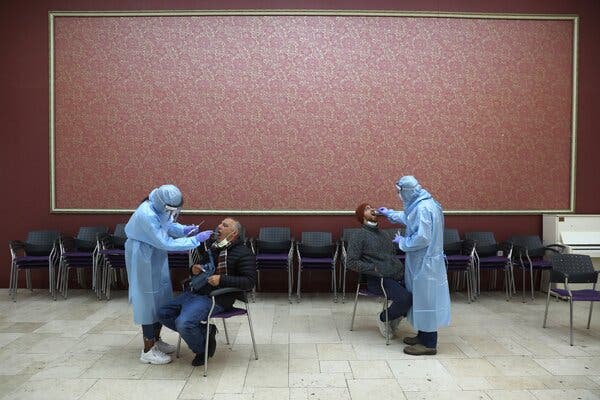 That group also experienced a 31 percent drop in hospitalizations from the coronavirus, and a drop of 24 percent of those who became critically ill.

The study is important, in part, because the authors were able to isolate other factors, including lockdowns, which also reduce the number of infections. The researchers found that even taking those factors into account, the vaccines had a significant impact.

How big an impact remains to be determined.

But new data released Thursday by one of Israel’s largest health networks suggest the vaccine’s protection in practice may be nearly as good as it was in the clinical trial.

The vaccine had a 95 percent efficacy rate in clinical trials. Researchers warned in November that those numbers might not hold up in the real world.

People who volunteer for trials may not represent the population as a whole, for example. Also, the Pfizer-BioNTech vaccine is challenging to administer on a national scale because it has to be kept frozen until shortly before it’s administered.

But Maccabi Healthcare Services reported Thursday that out of 416,900 people it had vaccinated, only 254 had gotten Covid-19 a week after their second dose. What’s more, all of the cases were mild. Comparing these rates to unvaccinated people, the researchers estimated that the vaccine has an effectiveness of 91 percent.

“The data continues to be very encouraging and the high efficacy of the vaccine is maintained and remains stable,” said Dr. Anat Ekka-Zohar, the director of the Division of Data and Digital Health at Maccabi.

The results are all the more striking, experts said, because Israel is contending with a worrisome new variant of the coronavirus. The variant B.1.1.7 now accounts for up to 80 percent of the samples tested in Israel.

First identified in Britain in December, the variant has spread to 72 other countries and may be up to 50 percent more transmissible than other variants.

A vaccination center on a basketball court in Hod Hasharon, near Tel Aviv, last month. Early data shows that the vaccines are working nearly as well in practice as they did in clinical trials.Credit…Oded Balilty/Associated Press

The first target was citizens over age 60, an age group that accounted for 95 percent of the more than 5,000 Covid-19 deaths in Israel. According to the Health Ministry, 84 percent of that age group has been vaccinated.

As a relatively small country with a highly digitized, universal health system, Israel became an attractive testing ground for Pfizer. As a result, Israel made a deal with the company, offering data in exchange for a steady supply of vaccines.

Despite its successes, Israel remains vulnerable. After a dip in new cases at the end of January, the average rate is climbing back up again. The contagiousness of the B.1.1.7 variant may be partly to blame, along with lower compliance with the current lockdown compared to previous ones. And all but a handful of Palestinians in the occupied territories are still waiting for vaccines, leaving them and Israelis less protected in any new surges.

There is also no telling what would happen if a more worrisome variant began spreading in Israel. A variant first identified in South Africa is not only more contagious, but might also render vaccines less effective.

At the same time, Israel’s much-vaunted vaccine program appears to have hit a snag as the numbers of those vaccinated dropped dramatically last week, suggesting that the country’s initial enthusiasm may be waning. The slowdown left some vaccination centers deserted this week.

The vaccination program has encountered resistance among some groups, particularly ultra-Orthodox Jews and Arab citizens, two communities that have been hit hard by the virus.

As an additional incentive once lockdown restrictions are eased, they are recommending limiting attendance at cultural or religious gatherings to people who have been fully vaccinated, have recovered from Covid-19 or can show a recent, negative test.

A police officer questions people in Tel Aviv during a lockdown, Israel’s third.Credit…Abir Sultan/EPA, via Shutterstock

Experts have also pointed to gaps in the Weizman Institute study that remain to be filled.

Hagai Levine, an epidemiologist at Hebrew University-Hadassah in Jerusalem, cautioned that the researchers observed only broad trends in the country rather than tracking individual people who had been vaccinated.

As a result, the study raises a number of questions it can’t answer. It’s not clear, for example, why the researchers only saw a decline in cases, severe illness, and hospitalization three weeks after the start of the campaign. In the clinical trial on the Pfizer-BioNTech vaccine, researchers observed the first signs of protection roughly 10 days after the first dose.

It’s possible that the impact was slower in Israel because the vaccination campaign was directed primarily at older people, whose immune systems may have taken longer to mount a defense.

“The message to the world is even if you are vaccinating at a crazy rate like Israel, even so, you will have to have patience,” Hagai Rossman, a co-author of the Weizmann study, said. “There is no magic wand.”

Other countries may not experience quite the benefit that Israel has recorded from its vaccine. Keeping the vaccine cold — it has to be stored at temperatures below -76 degrees Fahrenheit to remain effective — during transportation could be difficult in some places.

Still, Dr. Hanage said that other countries should be heartened by Israel’s results and see them as an incentive to vaccinate as many people as possible as quickly as possible.

“I actually think that the recent results should be quite comforting,” he said. “Overall, I think it’s good news.”