JERUSALEM — An Israeli woman accused of sexually abusing students at an Australian school where she was the principal has been extradited from Israel, according to reports in the Israeli news media, concluding a seven-year deportation process that had tested relations between the two countries.

Malka Leifer, 54, is accused of 74 counts of rape and sexual abuse that investigators say took place between 2004 and 2008, when she was the principal of a Jewish girls’ school in Melbourne.

Australian officials formally sought her extradition in 2014, but the process was repeatedly delayed after Ms. Leifer’s legal team at the time argued that she was mentally unfit to stand trial.

Photographs published Monday on an Israeli news website, Ynet, showed Ms. Leifer being escorted aboard a plane in Tel Aviv on Sunday night.

Ms. Leifer’s lawyer, Nick Kaufman, said he had not received official confirmation that she had been deported but had been told she would be sent to Australia this week.

Officials at the Israeli foreign and justice ministries, state attorney’s office, police force and prison service declined to comment, as did the Australian attorney-general’s office.

Ms. Leifer, an Israeli citizen, moved in 2001 to Australia, where she later became the principal of Adass Israel, a school for ultra-Orthodox Jewish girls, and then fled to Israel in 2008 after details of the assault allegations emerged.

The sluggish pace of the deportation process drew occasional criticism from Australian lawmakers. The case also embroiled an ultra-Orthodox Israeli government minister from the same sect as Ms. Leifer, Yaakov Litzman, after the Israeli police accused him of pressuring psychiatrists to report that Ms. Leifer was not well enough to be tried.

The case centers on the allegations of three sisters — Dassi Erlich, Elly Sapper and Nicole Meyer — who say they were abused by Ms. Leifer during her tenure as school principal. 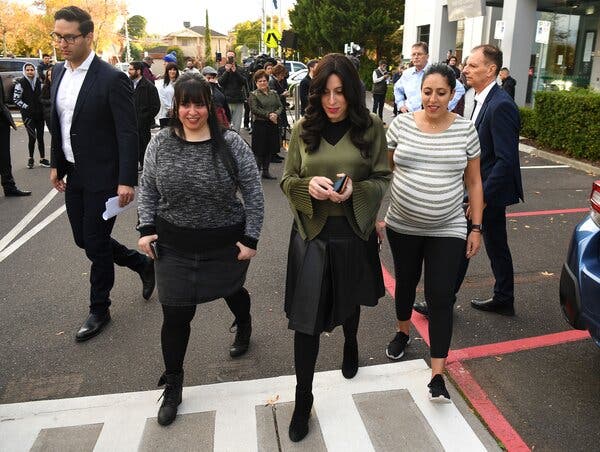 From left: The sisters Dassi Erlich, Nicole Meyer and Elly Sapir say they were abused by Ms. Leifer.Credit…James Ross/EPA, via Shutterstock

Ms. Meyer declined to comment on Monday about Ms. Leifer’s extradition. But victim’s rights groups and those close to the three sisters who have publicly spoken about their abuse said that they were overjoyed by the news that Ms. Leifer was on her way to Australia.

“They didn’t believe this day would come,” said Manny Waks, an abuse survivor and the chief executive of VoiCSA, a group that combats child sexual abuse in the Jewish community.

“I know that they are absolutely elated at the news and they are looking forward to their day in court and to holding Leifer to full account,” Mr. Waks said.

The trial of Ms. Leifer is unlikely to take place in 2021 because of logistical challenges created by the coronavirus pandemic, according to Mr. Kaufman.

After arriving in Australia, she is expected to appear by video link before a judge who will formally confirm her identity and read her the charges, Mr. Kaufman said.

“We hope that she will be held in a place of detention that will respect her religious beliefs and allow her contact with her lawyers and family on a regular basis,” Mr. Kaufman said.

Mr. Kaufman also said that the publication of photographs of Ms. Leifer’s extradition had undermined her dignity.

The Australian attorney general’s office said in a statement that the government was aware of the reports about Ms. Leifer’s extradition but could not comment on the process until she had formally concluded the extradition process.

“Both the attorney-general and minister for foreign affairs have expressed their thanks to the Israel government for its assistance and cooperation to bring this long-running process to a conclusion,” the statement added.

Officials at the German police force and Frankfurt airport, where Ms. Leifer was reported to have transferred onto a flight to Australia, said they could not confirm that she was in transit.