Kansas City Chiefs quarterback Patrick Mahomes’s listed base salary for the 2020 season is $825,000, a princely sum for ordinary folks but $85,000 less than the base salary of his teammate James Winchester, a valuable but obscure long snapper.

Tom Brady’s 2020 base salary of $15 million for the Tampa Bay Buccaneers is more in line with expectations for an N.F.L. quarterback, if not for a six-time Super Bowl champion and era-defining player. For example, Jimmy Garoppolo, Brady’s backup when they played for the New England Patriots, earned a base salary of $23.8 million for an injury-plagued and disappointing 2020 season for the San Francisco 49ers, while Las Vegas Raiders quarterback Derek Carr had a base salary of $18.9 million for another season of his established late-model family sedan caliber play.

This season’s Super Bowl matchup should not be fiscally possible on paper. The N.F.L.’s salary cap was supposed to have torn the Chiefs’ roster apart after their Super Bowl victory last season; Mahomes’s performance would command a contract that by itself had the potential to force the team into receivership. Similarly, the Buccaneers’ star-studded lineup of Brady, Rob Gronkowski, Ndamukong Suh, Antonio Brown and Jason Pierre-Paul — each a market-setter at his position at some point in his career — should be so prohibitively expensive as to force the team to fill the lower half of its roster with temps and interns.

The fact that the Chiefs and the Buccaneers kept their rosters intact appears to support the popular theory that the salary cap is a myth, a fiction used by franchises as an excuse to cut unwanted veterans, pinch pennies and fall short of expectations. The cap is in fact very real, but its arcane rules about bonuses, incentives and proration make N.F.L. cap management more like sorcery than an art or a science. And the voodoo economics the Chiefs and the Buccaneers are dabbling in could someday come with a steep price.

Mahomes, as you may recall, signed a reported 10-year, $477 million contract extension in July. It was the sort of contract that would force a mortgage lender to accept a plea bargain — full of deferred bonuses, staggered guarantees and balloon payments designed to forestall Mahomes’s biggest paydays until 2023 and beyond. As a result, his 2020 compensation (base salary plus bonuses) counted for just $5.34 million against the salary cap, which allowed the Chiefs to re-sign important players like the Pro Bowl defensive tackle Chris Jones despite little apparent maneuvering room in their theoretical budget. Even Mahomes’s future compensation will come mostly in the form of bonuses instead of salary, allowing for further feats of accounting magical realism.

Mahomes can afford to wait on his $40-plus million paydays because he is in high demand as an advertising pitchman, and successful quarterbacks are all but guaranteed long, lucrative careers. Brady is also a brand unto himself (and, as the spouse of an international celebrity, Gisele Bündchen, he brings in his household’s second income), but he has taken the opposite approach throughout his career by accepting short contracts full of guaranteed money. Lesser quarterbacks earn more than Brady in any given year, but he is always near the top of the N.F.L.’s wage earners and rarely more than a year away from another renegotiation and raise. 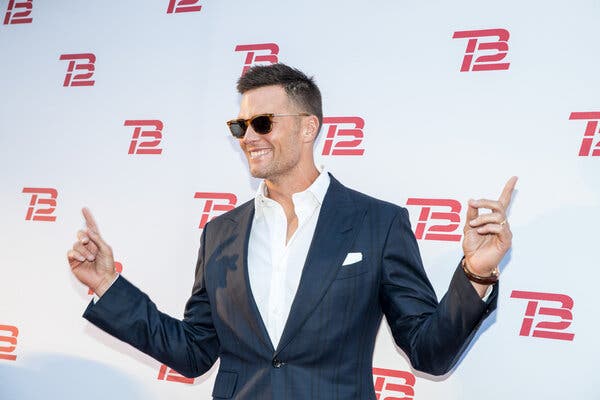 Buccaneers quarterback Tom Brady is always near the top of the N.F.L.’s highest paid players in part because of the strength of his brand.Credit…Scott Eisen/Getty Images

The Brady and Mahomes situations illustrate that salary cap alchemy typically boils down to compensating the superstar quarterback first, then fitting the rest of the budget around him. With a relatively affordable Brady in the fold, the Buccaneers could extend one-year offers to Brown, Gronkowski and Suh, veterans willing to sign for less than their market value to join forces with Brady and pursue a championship.

Similarly, important role players like Sammy Watkins and Bashaud Breeland, who re-signed with the Chiefs, and Le’Veon Bell, who signed as a free agent, were given one-year contracts made possible because Mahomes is being paid in tomorrow bucks. The appeal of a likely Super Bowl run couldn’t have hurt, either.

Even the cleverest cap model can backfire if a team cannot use success to sustain success. The Saints used reverse mortgage “die broke” tactics to pay Drew Brees through many years of Super Bowl near misses. With Brees’s retirement imminent, the Saints are so deep in deferred cap debt (an estimated $112 million) that they may be forced to pad their 2021 roster with season-ticket holders. The Philadelphia Eagles and the Los Angeles Rams overpaid quarterbacks Carson Wentz and Jared Goff (plus other top veterans) after trips to the Super Bowl in the 2017 and 2018 seasons. The Eagles are now facing an existential crisis, while the Rams are subsisting on the cap equivalent of maxed-out credit cards.

After the Super Bowl, a long list of in-house free agents (including starters like Lavonte David, Shaquil Barrett and Chris Godwin, plus the aforementioned mercenaries) will be vying for the Buccaneers’ very limited cap space while Brady, who turns 44 in August, prepares to once again plays chess with his own mortality. Even with all of their finagling, the Chiefs will enter the off-season an estimated $18 million over the cap, meaning that next season’s Chiefs probably won’t be as good as this season’s Chiefs. Both teams in this Super Bowl needed to get there to justify their efforts to stay one step ahead of the collection agency.

There is much more to “salary cap-enomics” than finding innovative ways to squeeze a Mahomes or a Brady into a budget — from extending in-house contracts before valued veterans reach free agency to avoiding spending sprees at positions like running back, where talent is plentiful and replaceable. Mostly, however, there’s no mystery to cap management, just the question of whether a team chooses to pay for its Super Bowl run today, tomorrow or by tacking almost a half-billion dollars onto the back end. Age and deferred debt eventually catch up to everyone. Even Tom Brady. Someday. Probably.

All cap data comes from OverTheCap.com.