BAGHDAD — In the upscale shisha lounge of one of Baghdad’s new restaurants, customers puffing on fragrant fruit-scented tobacco sit at gold-rimmed tables flanked by a giant video screen and views of the Tigris River. It’s a weekday night but the Dawa restaurant’s Sky Lounge is crowded with people partying like it’s 2019: no masks, no distancing, no problem.

“I live the lifestyle of 2019 before the coronavirus,” said Ali al-Khateeb, 37, a businessman, as he sat at a green velvet chair pulling smoke from a gold-embossed glass water pipe. “As Iraqis we don’t have a fear of death. It’s a psychological factor that can strengthen a human being’s immunity.”

His friend, Rami Riadh, 34, also a businessman, said he threw away his mask at the airport when he returned to Baghdad from Amman, Jordan, a week ago. “It feels like we live in another world here,” he said.

As coronavirus rates have fallen, Iraqis are flouting the recommended virus precautions en masse, many subscribing to a dubious belief in their own immunity. That conviction, derided by scientists, has been publicly endorsed by regional and local health officials and some religious leaders.

“We have reached a type of herd immunity,” one of Baghdad’s senior health officials, Dr. Jasib al-Hijami wrote in a December Facebook post. Reached by phone this week, he said he still stood by those comments.

Such misconceptions, and the widespread disregard for virus safety they have engendered even as more contagious new variants of the virus are coursing around the globe, are laying the groundwork for a major new outbreak, public health experts fear.

Iraq’s reported infection rate has been steadily falling from more than 3,000 new cases a day in November to fewer than 800 on most days in January. The decline has contributed to what experts say is a false sense of security.

“Honestly, it’s the calm before the storm,” said Ali Mokdad, director of Middle East Initiatives at the University of Washington’s Institute of Health Metrics and Evaluation. “There is a potential wave coming on unless Iraqis are vaccinated or taking social distancing measures.” 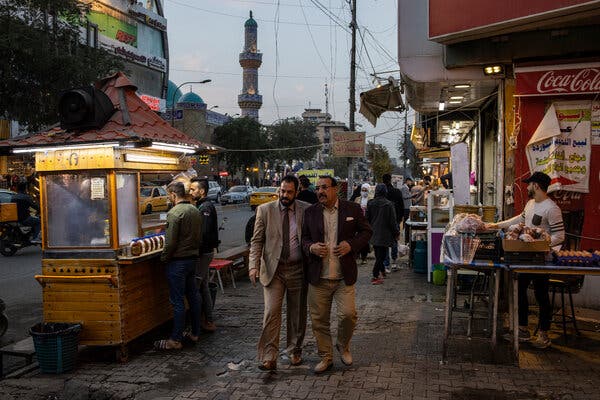 Iraqis go about their business as though there were no pandemic.Credit…Ivor Prickett for The New York Times

Dr. Mokdad says the drop in infection rates can be explained in part by Iraq’s temperate winter, in which windows are kept open. The relative youth of Iraq’s population could explain lower deaths and hospitalizations.

Other experts suspect that the real number of coronavirus cases in Iraq is likely to be double to triple the reported number.

But as the official number has fallen, Iraqi officials have eased restrictions.

At the height of the pandemic last year, Iraq closed mosques, schools and restaurants as its decrepit health care system struggled to cope. Those restrictions were loosened last fall as infection rates dropped.

Now the government is waging a losing public relations battle to persuade Iraqis to wear masks and to stop shaking hands and kissing cheeks, the common same-sex greeting in Iraq.

The campaign has been undermined by local and provincial health officials who have claimed that the rate has fallen because enough Iraqis have been exposed to the virus to achieve herd immunity.

Herd immunity is generally believed to occur when 70 percent or more of a population has been infected or vaccinated. That offers a virus fewer potential hosts and provides the population with some resistance to an outbreak.

The Shorja market in Baghdad, one of the most crowded places in the city where laborers and other workers are unable to observe social distancing.Credit…Ivor Prickett for The New York Times

Dr. Mokdad says that Iraq does not conduct the random testing that would allow it to determine accurate infection rates, but that the best estimate is about 20 percent of the population.

“For educated Iraqis and officials to come and say ‘we are immune’ or have a different strain is unacceptable because it gives a false sense of security,” he said.

At mosques, some preachers have been telling worshipers they should not fear the virus as long as they follow God.

Even Iraq’s health minister, Dr. Hassan al-Tamimi, has not tried to directly correct the misinformation.

Asked about herd immunity, he neither endorsed nor rebutted the notion. In an interview, he responded by crediting the fall in mortality rates to the country’s increased ability to treat Covid-19 cases and the decline in infection rates to divine protection.

“The main factor is the mercy of God,” Dr. al-Tamimi said.

He has expressed concerns about the highly contagious variant of the virus recently identified in Britain, and the government has taken steps to try to prevent infection coming from abroad.

Last week, the government banned entry for most non-Iraqi travelers from 20 countries with high infection rates, including those with the variant. But the restriction leaves wide gaps for people to come from other countries where the variant has been identified.

The Karada neighborhood in central Baghdad. After a strict lockdown was eased, life has returned to the streets despite government warnings of a possible new wave.Credit…Ivor Prickett for The New York Times

Dr. Riyadh Lafta, an epidemiology professor at Al Mustansiriyah University in Baghdad, said he expected another, more severe wave to hit by March or April, endangering not just those with compromised immunity but healthy younger people.

“We are afraid of another wave like what happened in Europe,” he said. “So this is the risk and threat that we are waiting for. Unfortunately many people are not very aware of it yet.”

Iraq, a country of 40 million people, is ill-prepared for a second wave.

A damaged infrastructure, a system of awarding control of ministries to political factions on the basis of loyalty, and rampant corruption has devastated the country’s health care system. Last summer, shortages of oxygen cylinders prompted riots at some hospitals among relatives forced to try to procure lifesaving equipment on their own.

Dr. al-Tamimi said that Iraq had opened 47 new plants to make or refill oxygen cylinders and added 14,000 new beds and 63 new hospitals to help deal with the pandemic. The number of hospitals could not be immediately independently verified. Another public health official said the number was fewer than 25.

Iraq has reserved 1.5 million doses of the Pfizer vaccine, he said, and is procuring ultracold freezers to store them for a vaccination campaign it expects to start by the beginning of March.

But Dr. Lafta and other public health experts said they doubted that enough Iraqis would agree to be vaccinated for the campaign to succeed.

“People here don’t like vaccines,” he said. “We were struggling very much in the past year just to convince them to vaccinate their children for polio and measles.”

He said given the widespread poverty that prevents many Iraqis from social distancing, he was not surprised that they would choose to believe they were immune rather than accept that they were at risk.

“It’s about making a living,” he said. “Because social distancing means that poor people don’t go to work, they don’t go out in the street to sell their goods. They feel if they worried about the coronavirus, they would die of hunger.”