BRUSSELS — A Belgian court on Thursday stripped a senior Iranian official of his diplomatic immunity, convicted him of organizing a thwarted bomb attack aimed at an Iranian opposition rally in France in 2018 and sentenced him to 20 years in prison.

The Iranian official, Assadollah Assadi, a Vienna-based diplomat detained in Belgium, invoked his diplomatic status in refusing to testify during his trial, which began last November. Mr. Assadi, now 49, received the maximum sentence on charges of attempted terrorist murder and participation in the activities of a terrorist group. He did not attend the hearing on Thursday at the courthouse in Antwerp.

The conviction is a blow to the Iranian government as it tries to persuade the United States to re-enter the 2015 Iranian nuclear deal before Iranians vote in presidential elections in June.

Mohammad Javad Zarif, the Iranian foreign minister, claimed in 2018 that the bomb plot allegations were a “false flag” operation designed to embarrass Iran as President Hassan Rouhani prepared to travel to Europe to rally support for the nuclear deal that President Donald J. Trump had recently abandoned.

The target of the bomb plot was an annual convention in Villepinte, outside Paris, of the National Council of Resistance in Iran, the political wing of the Mujahedeen Khalq, or M.E.K. The leader of the council, Maryam Rajavi, is a controversial figure who has been compared to the leader of a cult, as has her husband, Massoud Rajavi, who disappeared during the Iraq war in 2003 and is believed to be dead.

Ms. Rajavi has long argued for a revolution in Iran and says she would act as interim president of a new government. Prosecutors say the bomb plot was aimed at killing her and well-known international figures who also attended the 2018 convention. 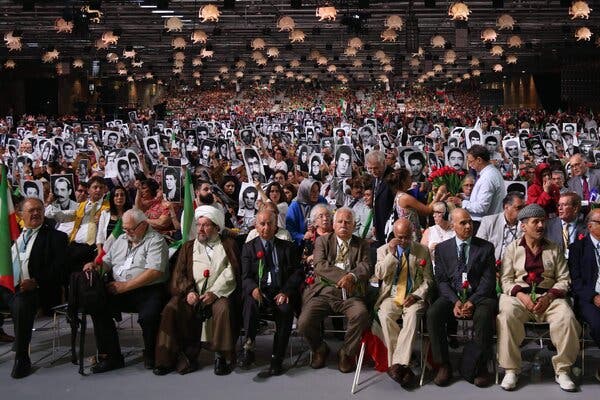 Those included Rudolph W. Giuliani, the former mayor of New York; Newt Gingrich, the former House speaker; Louis Freeh, the former F.B.I. director; Bill Richardson, the former governor of New Mexico; Stephen Harper, the former prime minister of Canada; and Ingrid Betancourt, a Colombian politician. In the past, such figures have been paid large sums of money for their appearances and lobbying activities.

The M.E.K., which Ms. Rajavi also leads, has a complicated history. The group began in opposition to the shah of Iran and later was considered a terrorist organization by the European Union until 2009 and by the United States until 2012.

The Belgian court also convicted three accomplices of Mr. Assadi, all dual citizens of Iran and Belgium, who were given jail terms of 15 to 18 years and stripped of their Belgian citizenship. All three are believed to be agents of the Iranian intelligence ministry, prosecutors said.

The head of Belgium’s State Security Service, Jaak Raes, said in a letter to the prosecutors that intelligence officials had determined the planned bombing was a state-sanctioned operation, approved by Tehran.

Mr. Assadi was attached to the Iranian mission in Austria when he supplied explosives for the planned attack. Prosecutors said that he brought about a pound of the explosive triacetone triperoxide,orTATP, and a detonator from Iran to Vienna in his luggage and then drove it to Luxembourg. There, he handed it over on June 30, 2018, to an Iranian-Belgian couple at a Pizza Hut. Mr. Assadi was arrested at a service station in Germany, where he did not have diplomatic immunity, as he drove back to Austria.

The couple, Amir Saadouni, 40, and his wife, Nassimeh Naami, 36, had been granted political asylum and later citizenship in Belgium. They were arrested as they drove to Paris from Antwerp on the day of the rally. The fourth defendant, Mehrdad Arefani, 57, was an associate of Mr. Assadi who was supposed to guide the couple at the rally.

Iran has been accused in the past of trying to eliminate opponents abroad. Denmark called for sanctions against Iran for planning another assassination there in 2018.

Mr. Assadi was in contact with Iranian agents all over Europe, according to documents provided to Belgian prosecutors by the police in Germany and the Netherlands, according to Belgium’s Flemish broadcaster, VRT. The documents include a notebook found in his car containing numerous receipts for payments to people identified only by aliases.

A note from Belgium’s intelligence and security agency identified Mr. Assadi as an officer of Iran’s intelligence and security ministry who operated undercover at the Iranian Embassy in Vienna, according to The Associated Press. Belgium’s state security officers said he worked for the ministry’s so-called Department 312, the directorate for internal security, which is on the European Union’s list of terrorist organizations