NEW DELHI — The world’s biggest economies are trying to borrow and spend their way out of the pandemic, from the European Union’s $900 billion stimulus package to President Biden’s proposed $1.9 trillion rescue plan.

Over all, spending would rise less than 1 percent at a time when India is suffering from its worst recession in years while battling the coronavirus. India’s economy, once one of the world’s fastest growing, is estimated to have shrunk nearly 8 percent in the current fiscal year, which will end on March 31.

“I don’t know why the government is so hung up on being fiscally conservative when the whole world is suggesting that this is the time, like no other, to be profligate,” said Mahesh Vyas, an economist and the chief executive of the Mumbai-based Center for Monitoring the Indian Economy.

“I don’t know any economist suggesting this line of policy,” he said.

The amount allocated toward defense, for example, totals only a fraction more than last year, even as Indian and Chinese troops face off along their largely undefined high-mountain border.

“This was only to be expected given the state of the Indian economy, but will certainly impact the military’s modernization,” said Lt. Gen. D.S. Hooda, India’s former commander of the area’s northern border with Pakistan and China.

In many ways, the budget reflects Mr. Modi’s difficult position. He remains hugely popular, and the country’s opposition parties have not been able to seriously challenge him.

But Mr. Modi’s stringent lockdown in March cratered the economy. His government says the move saved countless lives, but it also cost jobs. Many people are still out of work or earning less. 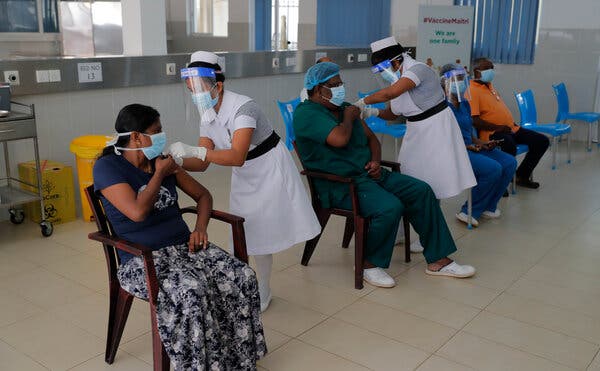 The Indian government is allocating a much larger share of its nearly $500 billion budget to infrastructure and health care.Credit…Eranga Jayawardena/Associated Press

He faces thorny challenges on other fronts. For months, farmers have been clamoring on the capital’s borders for lawmakers to repeal a trio of farm laws that Mr. Modi has said are key to India’s market reforms.

India’s economy was facing headwinds well before the pandemic. Between April and December 2019, G.D.P. grew only 4.6 percent. While more mature economies might envy that rate, it marks a slowdown from years when the country’s output grew at 7 to 8 percent.

The government could ratchet up spending, taking advantage of low global interest rates to borrow to pay for it. Still, that could spark inflation, a lingering fear in a country where many households struggle to afford basic staples. A surge in prices while much of the 1.3 billion population is already teetering on the edge could erode the popularity of Mr. Modi’s Bharatiya Janata Party.

Arun Kumar, an economics professor at the Institute of Social Sciences in New Delhi, said the government was also worried about a credit downgrade by international ratings agencies, which would make it more expensive for the government to borrow.

Thus, Mr. Modi is anxious to put India’s struggling economy in the best light possible. With coronavirus cases and deaths sharply down from the last peak in September, government economists are pledging a dramatic recovery.

“India focused on saving lives and livelihoods, took short-term pain for long-term gain, recognized that G.D.P. growth would drop but then recover and it has,” said the government’s chief economic adviser, K.V. Subramanian.

That recovery is far from assured. Even if the government’s rosy forecast of 11 percent growth is realized in 2022, India’s net growth would only be 3.5 percent — far short of what is needed to employ the millions of young people entering the job market each year.

Nirmala Sitharaman, India’s finance minister, defended the government’s relative frugality on Thursday, saying that the budget was just the latest in a series of public interventions meant to support India’s most vulnerable, while also boosting consumer demand and small and medium-size businesses that make up much of the Indian economy.

“We have spent, we have spent and we have spent,” Ms. Sitharaman told reporters on Thursday. “We have also shown a clear glide path for deficit management and bringing it down.”

India’s deficit target is one of the budget’s more ambitious goals. The fiscal deficit, which was 3.5 percent before the pandemic took hold in India, has jumped to 9.5 percent as the country scrambled to ramp up manufacturing of masks and other protective gear, plus testing for the coronavirus and expanding cash handouts and food rations to about 800 million people. Ms. Sitharaman aims to bring the fiscal deficit down to 6.5 percent.

Despite the lack of overall big spending, investors found a lot to like in the budget. It calls for increased spending for farmers — a priority given the protests on the outskirts of New Delhi in recent weeks — and greater privatization of state-run firms. After the budget was presented, the Bombay Stock Exchange’s main index jumped 5 percent.

Some economists remained skeptical. They pointed to studies like one from Azim Premji University that found that, of those who lost employment between April and May, one in five are still out of work.

Mr. Kumar, of the Institute of Social Sciences, said the government should be more concerned about the hit to the informal sector — the people who run shops, drive rickshaws or otherwise don’t appear on corporate payrolls. Because of a lack of data, the hit to their livelihoods could be much greater than realized.