LONDON — Health experts, doctors and government officials in Britain are calling for a more concerted campaign to address vaccine hesitancy among minority groups, with some also urging that those groups be designated a priority for immunization against the coronavirus because they are more at risk.

The government said on Monday that it would give 23 million pounds, or about $31 million, to local councils and other groups in England to encourage vaccines among those most at risk from the virus, including minority groups, by trying to combat misinformation and to build trust in the authorities.

The pandemic has already thrown into sharp relief the persistent racial inequalities in Britain, which have played a role in the disproportionately high rates of infection and death among minority groups and, some say, deepened their mistrust of the government.

Recent polls showed that members of Black, Asian and other minority groups in the country are less open to getting the vaccine than white people are because they worry about the vaccine’s reliability. Britain’s drug regulator, seen as a bellwether agency, has said the vaccines are safe and effective.

“I am conscious some Londoners are hesitant to receive the Covid vaccine because they are from communities which have, in the past, been let down by institutions,” Mayor Sadiq Khan of London said. “But these vaccines are safe and effective, and I urge everyone who is invited to receive one to do so.” 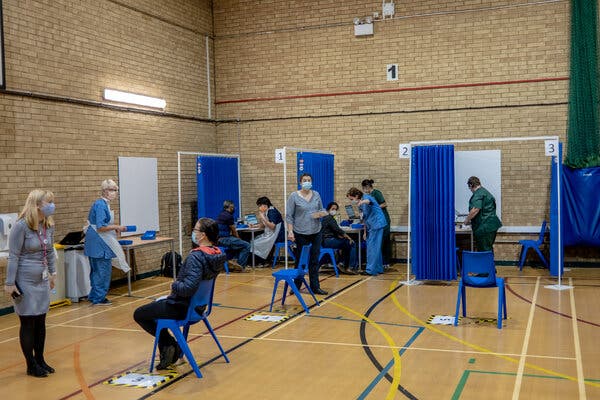 A vaccination center in Cardiff, Wales, in December. Recent polls show that Black and minority ethnic Britons are less open to getting the vaccination that white Britons are.Credit…Andrew Testa for The New York Times

The stakes could hardly be higher for countries to address skepticism and anxiety around vaccinations. The British government is banking on a campaign to vaccinate tens of millions of people by April as an escape route from stop-and-start lockdowns and their crippling economic fallout.

Maureen Pryce, a 58-year-old former caregiver of Caribbean descent, said that she had stopped taking vaccinations after one of her daughters suffered a bad reaction to one years ago. Even with family members sickened by the virus and deaths increasing in her neighborhood, her mind was made up, she said.

“I’m not having it. I refuse,” she said this month. “How can we trust you?” she said of the authorities. “You have a history of lying to us.”

There are deeply rooted reasons for a mistrust of health care among minority groups, experts say, with a history of abuse and racism in the medical establishment. For 40 years ending in 1972, doctors intentionally did not treat African-American men infected with syphilis to study the course of the disease. In Nigeria, Pfizer agreed to a $35 million settlement with Kano State after 11 children died in a 1996 trial of an experimental meningitis drug.

And two French doctors spurred an outcry last April when they suggested Covid vaccines should be tested in African countries, where people had less access to personal protective equipment.

As growing numbers of people have received the vaccine without incident, vaccine hesitancy overall appears to be waning in Britain, according to a YouGov poll in January. As of Monday, about 6.5 million in Britain, out of a population of about 67 million, had received a first dose of the vaccine.

But in a survey of 12,035 people commissioned by the government’s scientific advisory group, vaccine hesitancy was higher in Black Britons and in those of Pakistani, Bangladeshi and other ethnic backgrounds.

In the city of Birmingham, for example, one health official said anecdotal evidence suggested that about half of those belonging to minority groups who were invited to receive vaccines were turning them down, according to the BBC.

Volunteers preparing food parcels for those in need in Newcastle, northern England, in March. The pandemic has thrown into sharp relief the persistent racial inequalities in Britain.Credit…Mary Turner for The New York Times

Members of minority groups are not the only skeptics. Many, in fact, are “desperate” for a vaccine that has not come quickly enough, said Halima Begum, the chief executive of Runnymede Trust, a London-based organization that advocates racial equality, adding that she had two siblings with Covid-19 in the hospital.

Still, health experts and lawmakers have called for collecting more data on the vaccine rollout across different ethnic backgrounds, which they say is lacking, and to improve messaging on vaccine safety to people of color.

Opposition lawmakers have lobbied the health secretary, Matt Hancock, to consider adding minority groups to a vaccine priority list, citing statistics on mortality. Doctors received some guidance from the National Health Service to prioritize ethnic minority groups if they were already eligible because of age, said Prof. Martin Marshall, chairman of the Royal College of General Practitioners.

The Department of Health has said that priority for vaccinations would be given to older adults and to those with underlying health conditions, including in Black and ethnic minority groups.

But primary care doctors, particularly those working in multiethnic areas, have expressed worries about vaccine skepticism.

To counter misinformation, local officials and community leaders have been sending messages in several languages that the approved vaccines, though fast-tracked, have been found to be safe and effective.

But misinformation abounds online. There are baseless claims that the vaccine is a method of population control, that it could change a recipient’s DNA, or that it contains animal products such as pork, which might raise conflicts with some religious practices.

Imams are dedicating sermons this month to reassuring the Muslim community that the vaccine is halal and advising people to take it if offered. Doctors are holding Zoom sessions answering questions for the Sikh community.

Nadhim Zahawi, the Iraqi-born British minister in charge of vaccine deployment, told BBC Radio last week he was worried that ethnic minority groups might disproportionately refuse the vaccine and become infected more quickly. But he said Monday that he was working with faith and community leaders to build awareness that vaccines were safe.

A testing center in Liverpool, northwestern England. Black and Asian and other minority ethnic groups in Britain have contracted and died from the virus at higher rates than white people have.Credit…Mary Turner for The New York Times

Still, many say that the British government should have invested far sooner in responding to these concerns.

Glory Nyero, a Black analyst in social care and housing from London, said she had grown up wary of the health care system and with a sense that British institutions did not always understand people of color.

“In the end, I will get it if I have to,” she said of the vaccine, adding that she worried her newborn could contract the virus.

“To hear that vaccine has only been tested and run through within a year — that creates quite a lot of hysteria,” she said.

Critics of the government said that in a year when racial injustice had become a global focus, lawmakers did not do enough to protect people of color, despite a review of data that showed glaring disparities in the coronavirus toll.

“A colorblind policy hurts those who are most impacted,” said Ms. Begum of the Runnymede Trust. She says she wants urban areas, where many minority groups live, to be vaccinated first.

Part of the chasm from the pandemic’s toll could come from longstanding disparities in wealth and housing, a government review said, noting also that people of color were more likely to be in jobs with greater exposure to the virus, such as in health care and food production.

They were also more likely to have pre-existing health conditions such as diabetes and obesity, the review added, which increased the risk and severity of the infection, and may be less likely to seek help when needed because of historical racism and negative experiences with health care or at work.

Salman Waqar, a family doctor and general secretary of the British Islamic Medical Association, is among those working to persuade people to take vaccines.

“Any community that has been ignored and neglected is especially vulnerable,” he said. “That vulnerability’s now been exploited by the anti-vaccine messaging that’s coming in.”