Republicans in the Minnesota State Senate were feeling jubilant after the November election. They had held onto a slim majority following an onslaught by Democrats trying to win control. Now, it was time to party.

More than 100 senators, their spouses and their staff members gathered for a celebratory dinner at a catering hall outside the Twin Cities on Nov. 5, two days after Election Day. Masks were offered to guests on arrival, but there was little mask wearing over hours of dining and drinking, at a moment when a long-predicted surge in coronavirus infections was gripping the state.

At least four senators in attendance tested positive for Covid-19 in the days that followed. One was the Republican majority leader, Paul Gazelka, the state’s most outspoken opponent of mask mandates and shutdown orders during the pandemic. He compared his symptoms to a “moderate flu” and recovered. So did two other senators who had tested positive after the dinner.

The fourth was Senator Jerry Relph, a Vietnam veteran and grandfather from St. Cloud, Minn. Struggling to breathe after testing positive for the coronavirus, he was admitted to a hospital in mid-November. He died on Dec. 18, at age 76.

His daughter Dana Relph, who watched her father fight the disease as well as the cruel isolation it forces on patients and families, is still furious at Republican leaders for holding the dinner and the refusal of Mr. Gazelka to take responsibility.

Mr. Relph died on Dec. 18 after being admitted to a hospital in mid-November.Credit…Glen Stubbe/Star Tribune, via Associated Press

“Why are you throwing a party with 100-plus people in the middle of a pandemic?” said Ms. Relph, 44, who was not allowed to visit her father until the day he died. “Why would you choose to do that when we know people are going to be eating and drinking and taking their masks off, where their inhibitions will be lowered? Why would you even consider that responsible behavior?”

Mr. Gazelka declined an interview request, and a spokeswoman said he would not respond to Ms. Relph “out of respect for privacy requested from the family.”

Ten months into the coronavirus crisis, the ongoing Republican resistance to mask wearing and social distancing is a striking political phenomenon: G.O.P. officials have abetted the spread of the virus to friends and colleagues, even fatally so, because they don’t take the science seriously.

Four Democratic members of Congress tested positive this month after being in lockdown at the Capitol on Jan. 6 with Republicans who refused to wear masks. Luke Letlow, just elected to Congress as a freshman Republican from Louisiana, died of Covid-19 in December, days before he was to be sworn in. According to the election data site Ballotpedia, six state lawmakers have died from Covid-19, including the speaker of the New Hampshire State House and a Virginia state senator who succumbed on New Year’s Day. All six were Republicans.

G.O.P. officials and voters have amplified President Trump’s misinformation about risk factors. After two packed campaign rallies in Minnesota for the president over the summer, defying state orders and federal guidelines, coronavirus cases spiked in the surrounding counties.

And while Republicans insist that their freedom was at issue in refusing to wear masks or enforce mandates, such events and the death of Mr. Relph raise urgent questions as to where individual “freedom” ends and where responsibility to others begins in a pandemic during which breathing shared air can be fatal.

“It’s ironic that Senator Gazelka, as majority leader, was always the person most outspoken in opposing the governor’s emergency order and would state to us over and over again that Minnesotans would do the responsible thing,” said Richard Cohen, a Democrat who retired from the Legislature last month. “And now it is alleged that because of a caucus event, where apparently many people were not wearing masks, a caucus member became ill and then passed away.”

An owner of the catering hall, John Schiltz, said that his servers had worn masks and gloves throughout that evening, and that none had later tested positive. Although masks were offered to guests, state guidelines at the time allowed them to be removed at tables.

Mr. Schiltz said the dinner was the only event any group had booked at his venue in November before he had to close on Nov. 20. As of that date, Gov. Tim Walz, a Democrat, restricted bars and restaurants to takeout and delivery service only amid a surge in virus cases, hospitalizations and deaths. 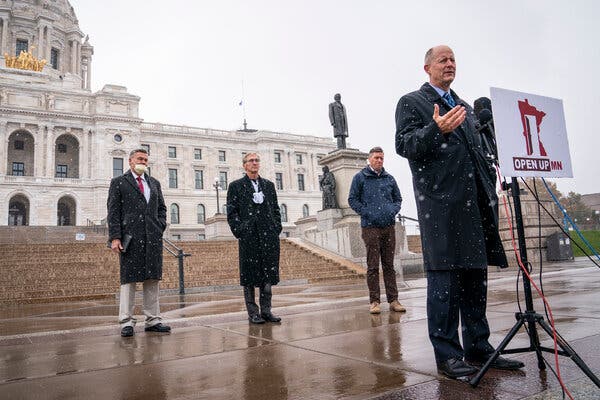 Paul Gazelka, the leader of the Republican majority in the Minnesota State Senate, spoke outside the State Capitol in October.Credit…Leila Navidi/Star Tribune, via Associated Press

Pressed about the dinner in a radio interview in late November, Mr. Gazelka, 61, who is reported to be considering a run for governor, said he had no regrets.

“There was a lot of food and a lot of beverage, and when you’re at an activity when the food and beverage is there, that’s when you don’t have your mask,” he said. “I don’t regret that we had the celebration. The Republican majority was the No. 1 target to switch from Republican to Democrat.”

He continued through the year to argue that mask mandates or limits on restaurants and bars were not needed because Minnesotans could be trusted to make responsible choices, and that the harmful effects on schools, the economy and people’s mental health outweighed the value of restrictions.

In part, his position reflected a broad divide along regional and partisan lines in Minnesota, just as in other states, where many urban residents faithfully wear masks but fewer do so in rural areas.

Holding the celebratory dinner wasn’t the only point of contention.

Afterward, Republicans alerted their own caucus about the virus outbreak, but not Democrats. They instructed Republican staff members not to go to the Capitol for a special session of the Legislature on Nov. 12 — but did not inform Democrats, who were livid after learning of the positive cases from news reports.

Senator Susan Kent, the minority leader for the Democratic-Farmer-Labor Party, as Minnesota Democrats are known, called on Mr. Gazelka to resign his leadership role.

“The idea that everyone can just be trusted rings a little hollow with the knowledge” that Republicans did not tell Democrats of the positive cases before the special session, Ms. Kent said in an interview last week.

She described the working environment of the Senate as poisoned by Republicans’ disregard for masks. Most refuse to wear them on the Senate floor, she said. One Republican senator, she recounted, broke into fake coughing while waiting for an elevator in a cramped vestibule with Democratic colleagues.

After learning of the outbreak from Republican leaders, Mr. Relph, who did not have any symptoms, went for a coronavirus test, his daughter said. It came back positive.

“None of us can be sure he got sick at that party, but it’s really, really likely,” Dana Relph said. “There wasn’t any other place he would have gotten it.”

As one of the Senate’s oldest members, Mr. Relph was one of the few Republicans known for regularly wearing a face covering. He had an underlying condition, mild asthma, his daughter said.

A first-term officeholder, he had been recruited to run after volunteering for local Republicans in St. Cloud, a central Minnesota city that leans Democratic within a heavily Republican county. A Marine Corps lieutenant in Vietnam, Mr. Relph, who had remarried after his first wife died, had a law degree and practiced estate planning and tax law.

“I didn’t know he was a Republican until well into my adulthood,” said Ms. Relph, one of two children from his first marriage. Her father loved to talk, to debate, but did not try to impose his political views, said Ms. Relph, who today identifies as a socialist. “It was more important to him that we think about what was good, what was right, than what the political view of something was.”

As a lab technician for 3M, Ms. Relph tests industrial masks. “The fact that people deny the science behind masks makes me even angrier,” she said. She recalled that a Senate colleague of her father’s had stopped by her family’s house, without a mask, while her father was in the hospital. “Point blank, he said, ‘I don’t think this is as serious as they’re telling us it is,’” Ms. Relph said. “My dad was dying. These are people that think they’re good, kind, compassionate people, and yet they don’t act that way.”

On Nov. 3, President-elect Joseph R. Biden Jr. comfortably won Minnesota, but Republicans held their majority in the State Senate, thanks to strength in rural areas.

When Mr. Relph attended the dinner two days later, he appeared to be narrowly winning re-election in his swing district. But as more ballots were counted, his Democratic opponent edged ahead, winning by 315 votes. Democrats needed to flip just two seats for a majority in the Senate. Although they won Mr. Relph’s district, they lost a seat of their own, and Republicans kept control.

Ms. Relph said her father’s ambivalent embrace of the president might have cost him support with the Republican base. He once co-sponsored a bipartisan bill to target economic aid to the Somali community. It earned him the nickname “Jihadi Jerry” among fervent Trump supporters, his daughter said.

Last week, as the Legislature returned for its 2021 session, senators held a moment of silence for Mr. Relph. Mr. Gazelka called him “a great senator, a true friend.”

The majority leader also led his party in blocking a Democratic proposal to require masks in public areas of the Capitol, flouting a statewide mask mandate, imposed by the governor, in indoor settings. (The Legislature is not subject to the governor’s orders.) Republicans questioned the effectiveness of masks. But Mr. Gazelka did include language in a resolution “strongly encouraging” mask wearing.

Ms. Kent, the Democratic leader, said that she had noticed lately that Mr. Gazelka was always wearing a mask himself in the Capitol, where before he had not worn one. Besides Mr. Relph’s death, Mr. Gazelka’s mother-in-law died in December after contracting Covid-19.

“I’ll give Senator Gazelka some credit,” Ms. Kent said. “He has changed his tone. He stops short of a mandate, but he is wearing a mask consistently. He’s recognizing in many ways that it matters.”

Ms. Relph is not so forgiving, recalling her father’s lonely death. “You try and talk on the phone, but the person is so tired all the time, talking is exhausting,” she said. “There’s just no way to connect with the people that you love because they are putting all their energy into fighting.”