TORONTO — For years, Peter Nygard presented himself as a rags-to-riches story: a multimillionaire who built a fashion empire from nothing, hobnobbed with Canadian prime ministers and traveled between his luxurious homes on a private jet, surrounded by women a fraction of his age. And he was a modern Juan Ponce de León, claiming to have found the fountain of youth through diet, exercise and regular stem-cell infusions.

But in a Manitoba court this week, his lawyers presented a very different picture of the 79-year-old inmate, now facing extradition to the United States and seeking to be released on bail: He was old, sick, broke, lonely and likely to die in jail, where he has languished for more than a month and where the coronavirus is raging.

In his own affidavit, Mr. Nygard said that since his arrest, “I am getting weaker everyday. I have lost weight; have difficulty breathing (it’s getting worse); have suffered dizziness and fainting spells as well as numbness in my hands and toes.”

He added that the jail food, full of sugar and carbohydrates, which he had cut from his diet, had made him “violently sick.”

His lawyers offered a proposal for Mr. Nygard’s release that they called “rock solid,” but the judge said she had “some serious issues” with the plan, and with one guarantor in particular, before agreeing to adjourn the case for another week, so Mr. Nygard’s lawyers could regroup and draft a Plan B.

Mr. Nygard faces charges of sex trafficking, racketeering conspiracy and other crimes, involving dozens of women and teenage girls. A nine-count federal indictment, filed by the U.S. attorney’s office in Manhattan in December, accuses the fashion magnate of using his company’s influence, money and employees to recruit adult and “minor-aged female victims” over a 25-year period in the United States, the Bahamas and Canada for his sexual gratification and that of his associates. 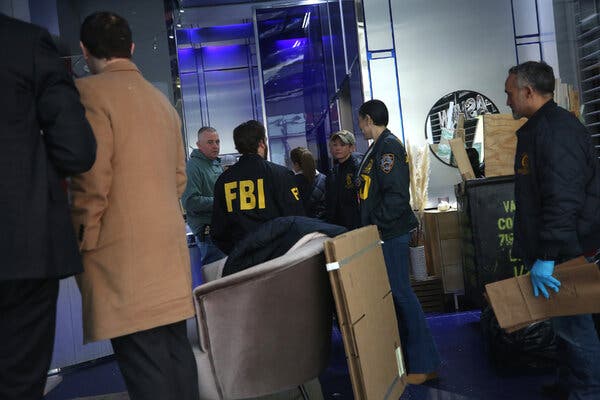 At the request of the United States, police arrested Mr. Nygard on Dec. 14 in Winnipeg, Manitoba, and he has been in jail ever since awaiting the start of extradition court proceedings.

At a bail hearing this week, Mr. Nygard’s lawyers proposed he live alone under house arrest in Winnipeg, in a home he paid for last September, with regular check-ins and a GPS ankle bracelet.

Appearing in court by video camera from jail, Mr. Nygard seemed a shadow of his former self. He wore a stained T-shirt; his trademark hair, normally quaffed in a silver mane, was tied back in a simple bun. His face, broadcast on a giant screen, was covered by a blue medical mask.

Up until last year, Mr. Nygard was the head of a multinational women’s fashion company called Nygard International that he owned privately and built from scratch. It was known mostly for selling leggings and tops to middle-age women through its own outlets and department stores, and at its peak, claimed 12,000 employees.

After federal authorities raided his home in Los Angeles and corporate headquarters in New York last February, Mr. Nygard stepped down. His company then filed for bankruptcy in Canada and in the United States.

In court, none of his 10 children showed up to guarantee that he would follow any bail conditions. Instead, two former employees “who know Mr. Nygard the best,” according to his lawyer Jay Prober, offered their properties as collateral. Together, they were worth around $950,000 — a fraction of the wealth Mr. Nygard once flaunted, which in 2014 Canadian Business magazine estimated at $750 million.

Mr. Prober said that because Mr. Nygard no longer had access to that money, this was “the best he can do.”

Mr. Nygard was the head of a multinational women’s fashion company called Nygard International that he owned privately and founded.Credit…John Minchillo/Associated Press

Problems quickly surfaced with the two men offering to guarantee that Mr. Nygard would remain under house arrest. One of them, Steve Mager, has been convicted twice for cocaine trafficking and was formerly associated with the Hells Angels motorcycle club, according to court records. The other, Greg Fenske, was a director at Nygard International, who was painted by the prosecution as a crony for Mr. Nygard, used to shuffle the mogul’s money as his company went bankrupt. On one occasion, Mr. Fenske overpaid a California utility bill by $60,000 and then demanded that it be repaid to a different Nygard company that had not filed for bankruptcy.

During cross-examination, Mr. Fenske admitted to deleting more than 1,000 documents after the grand jury in the Federal District Court in Manhattan subpoenaed company files in February, and Nygard International’s lawyer had instructed managers to preserve all their records.

“There were lots of problems with his evidence,” Justice Shawn Greenberg added, pointing to the email deletions as evidence that he didn’t follow legal orders, not to mention another large money transfer, which she found “very suspicious.”

The judge questioned how Mr. Fenske could be a good guarantor for Mr. Nygard when he had no “skin in the game,” given that the $710,000 house Mr. Fenske offered as collateral was the same one purchased in September with Mr. Nygard’s money.

At the hearing, Mr. Fenske said he was supporting his former boss because he believed “in Mr. Nygard’s innocence.” Since last spring, Mr. Fenske has managed the company’s bankruptcy issues for no pay, he said.

Scott Farlinger, the government’s prosecutor, argued that Mr. Nygard was a serious flight risk who had access to money from his tangled companies, many of which were not part of bankruptcy proceedings. The prosecution also pointed to Mr. Nygard’s history in the Bahamas, where he has been convicted of both contempt of court and failing to appear in court. In 2019, a judge issued a warrant for his arrest.

A police search of Mr. Nygard’s assistant’s phone “indicated that at least as recently as April 2020, Nygard was considering travel to Malta or Bermuda,” according to a court document. It also said that he was “considering the logistics of traveling under an alias.”

The gate to Nygard Cay, in the Bahamas, where so-called pamper parties were held for young women.Credit…Elizabeth D. Herman for The New York Times

Mr. Nygard’s lawyers countered that if his plan was to flee he would have done it last year when he learned the F.B.I. was investigating him, but instead he let his passport expire. In any event, “with Covid, there is nowhere to go,” said Mr. Prober.

The pandemic, Mr. Nygard’s lawyers argued, made it difficult to assemble a plan with their client in jail, where the virus has infected 213 inmates since last March. The disease also formed the crux of the argument for their client’s release on bail.

As recently as two years ago, Mr. Nygard played in beach volleyball tournaments and plastered images of himself — with his glistening, bulging biceps — on billboards across Winnipeg. But now, he described himself as the ideal target for the disease — old, frail with a host of comorbidities, including Type 2 diabetes and fluctuating blood pressure.

For now, he will remain in jail for at least another week. His next appointment in court is set for Jan. 28.

“Nygard is fighting for his life,” said Richard Wolson, another lawyer representing Mr. Nygard. “His health is an downward spiral.”