WASHINGTON — The House impeachment managers on Tuesday laid out their case against Donald J. Trump, asserting that he was “singularly responsible” for the deadly assault on the Capitol last month and must be convicted and barred from holding public office.

In an 80-page brief filed on Tuesday, the managers outlined the arguments they planned to make when the Senate opens Mr. Trump’s trial next week, contending that the former president whipped his supporters into a “frenzy” as part of a concerted campaign to cling to power. Spinning a vivid narrative of a harrowing day when lawmakers were forced to flee as a violent pro-Trump mob breached the Capitol, the prosecutors also reached back centuries to bolster their case, invoking George Washington and the Constitutional Convention.

“The framers of the Constitution feared a president who would corrupt his office by sparing ‘no efforts or means whatever to get himself re-elected,’” wrote the nine House Democrats, led by Representative Jamie Raskin of Maryland, quoting directly from the 1787 debate in Philadelphia. “If provoking an insurrectionary riot against a joint session of Congress after losing an election is not an impeachable offense, it is hard to imagine what would be.”

In Mr. Trump’s own shorter filing, specked with typos and stripped of the former president’s usual bombast, his lawyers flatly denied that he had incited the attack and repeatedly argued that the Senate “lacks jurisdiction” to try a former president. They repeatedly urged an immediate dismissal of the single charge against him, “incitement of insurrection.”

“The Senate of the United States lacks jurisdiction over the 45th president because he holds no public office from which he can be removed, rendering the article of impeachment moot and a non-justiciable question,” the lawyers, Bruce L. Castor Jr. and David Schoen, wrote in their 14-page response to the charge.

Their other broad argument was that Mr. Trump’s remarks on Jan. 6 and in the weeks before were constitutionally protected.While they did not argue explicitly that Mr. Trump had won the 2020 election, as some said he wanted his legal team to do, the lawyers sought to shroud his false claims of widespread voter fraud in free-speech arguments.

They effectively argued that Mr. Trump believed he “won it by a landslide,” and therefore was within his First Amendment rights to “express his belief that the election results were suspect.” His claims could not be disproved, they added, because there was “insufficient evidence.”

President Biden won the election by about seven million votes, according to results certified by every state. Dozens of cases Mr. Trump brought alleging voting fraud or improprieties were tossed out or decided against him, many times by Republican-appointed judges, for lack of evidence.

The impeachment filings provided the clearest preview yet of the legal strategies that are likely to shape a politically fraught impeachment trial of Mr. Trump — his second in just over a year — that is scheduled to begin in earnest in the Senate on Tuesday. They indicated that both sides expected drawn-out debates over the constitutionality of a trial, as much as Mr. Trump’s culpability for what took place.

Despite their initial criticisms, a majority of Republican senators now appear to be lining up once again to acquit Mr. Trump. But the arguments could determine the difference between a near-party-line verdict like the one that capped the former president’s first trial in 2020 or a more bipartisan rebuke that could constrain any future political ambition he harbors.

Though senators have yet to agree to a final set of rules to govern the proceeding, both parties appear to share an interest in an exceedingly swift trial, without new witnesses or fact-finding, that could conclude as soon as Saturday, Feb. 13. That would be far shorter than any presidential impeachment trial in history. But Republicans are eager to turn a page on a divisive former president, and Democrats are impatient to turn to advancing the agenda of the current one. 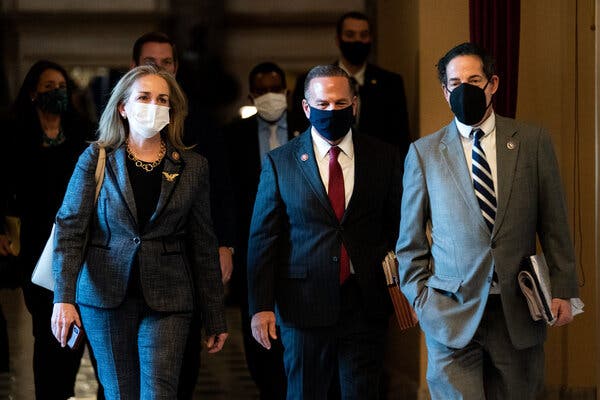 If Mr. Trump’s lawyers were trying to reassure Republican senators that they could dismiss the case without confronting its merits, the House managers were aiming instead to force them to confront the terror of the Capitol riot with an unusually visceral prosecution. They have compiled hours of footage from Parler, Twitter and elsewhere that they plan to play from the well of the Senate next week to compel Republicans to face Mr. Trump’s conduct head on, rather than retreating behind arguments around the process.

The approach was evident in their legal brief, which was more dramatic in parts than a typical courtroom filing. It follows Mr. Trump from his early-summer warnings about a “rigged” election up to his last, futile attempts to target Congress’s Jan. 6 counting session to snatch victory away from President Biden.

All the while, the managers argued, Mr. Trump was issuing a “call to mobilize” to his supporters to “stop the steal.” He invited them to come to Washington in early January. Then used a speech on the Ellipse outside the White House just before the attack to urge them to “fight like hell” and march to the Capitol to confront members of Congress and Vice President Mike Pence.

The calls incited the mob to action, they argued, citing videos posted on social media in which supporters of Mr. Trump can be heard yelling “invade the Capitol building” after he urges them to “show strength.”

“He summoned a mob to Washington, exhorted them into a frenzy, and aimed them like a loaded cannon down Pennsylvania Avenue,” the managers wrote.

Unlike the first impeachment case against Mr. Trump, which centered on his pressure campaign on Ukraine, this one has bipartisan support and the prosecutors appear poised to make frequent use of Republicans’ own criticisms of Mr. Trump. Their brief quoted Representative Liz Cheney of Wyoming, one of 10 House Republicans who voted to impeach, as well as Senator Mitch McConnell of Kentucky, the minority leader, who said publicly that Mr. Trump “provoked” the mob.

In making constitutional arguments in favor of Mr. Trump’s conviction, though, they reached hundreds of years further back, arguing that Mr. Trump had not only prompted violence but threatened the tradition of the peaceful transfer of power begun by Washington. They also cited debates by the founders about who would be subject to impeachment and when, as well as a 19th-century impeachment trial of a former war secretary, to assert that the Senate clearly had a right to try Mr. Trump even after he left office.

“There is no ‘January exception’ to impeachment or any other provision of the Constitution,” the managers wrote. “A president must answer comprehensively for his conduct in office from his first day in office through his last.”

They also insisted that the First Amendment right to free speech could not shield Mr. Trump from responsibility for inciting violence that would seek to do harm to the Constitution, undermining all the rights enshrined there, including free speech.

The president’s filing was narrower by design, with a lengthier, more detailed brief due from his lawyers early next week. Still, the contours of their defense were becoming clear.

The lawyers said Democrats had misinterpreted Mr. Trump’s actions and his intent, denying that he was responsible for the Capitol riot or that he intended to interfere with Congress’s formalizing of Mr. Biden’s win. They said his words to supporters on Jan. 6 — “if you don’t fight like hell, you’re not going to have a country anymore” — were not meant as a call to violent action, but were “about the need to fight for election security in general.”

“It is denied that President Trump incited the crowd to engage in destructive behavior,” they wrote. In another section, they denied that Mr. Trump had “threatened” Georgia’s Republican secretary of state or “acted improperly” when he demanded during a January phone call that the official “find” the votes needed to overturn his loss in that state and vaguely warned of a “criminal offense.”

The lawyers reprised an argument against the constitutionality of the trial popular with Republican senators. They asserted that a plain reading of the Constitution — which does not explicitly discuss what to do with an official impeached but not tried before he leaves office — does not permit the Senate to try a former president.

But they also said that Mr. Trump “denies the allegation” that his claims that he won the election were false. If that argument plays a central role in the trial, Republican senators could quickly find themselves painfully wedged between a conspiracy theory they fear could do lasting damage to their party and millions of their own voters who believe it.

Mr. Trump’s response appeared to be somewhat hastily assembled after the former president shook up his legal team just 48 hours before the brief was due; the response, for example, was addressed to the “Unites States Senate.”

In an interview later, Mr. Schoen pointed to another potential argument that could help Mr. Trump: that at least some of the Trump supporters who stormed the Capitol planned their attack in advance, suggesting that the former president was not the inciting force.

“I have no reason to believe anyone involved with Trump was in the know,” he said of the violence that unfolded at the Capitol. Still, he conceded the heart of the defense would lie elsewhere.