MOSCOW — Yulia B. Navalnaya, the wife of the Russian opposition leader, Aleksei A. Navalny, knows how to deal with her husband’s frequent detentions at the hands of the Russian authorities.

In 2018, a Russian general wearing a gigantic green military cap and a showy array of military medals, released a video recording with a bald threat to “make nice juicy mincemeat” of Mr. Navalny. So Ms. Navalnaya stepped in to deliver the riposte her then-jailed husband could not — and with the typical humor of the Navalny family. In an Instagram post, she snickered at his cartoonishly large hat, saying he looked like a tinpot dictator.

Now, with her husband facing a two-year prison sentence — his first lengthy term — the question on many minds in the opposition and elsewhere is whether the woman sometimes called the first lady of the opposition will take a more prominent role, or even enter politics in her own right.

Already far more high profile than the typical Russian political spouse, Ms. Navalnaya has inspired admirers in Russia and beyond, supporting her husband throughout his rise to prominence, eyes wide open to the extraordinary risks. Along the way, she drew sexist attacks from state media caricaturing her as an overbearing wife. 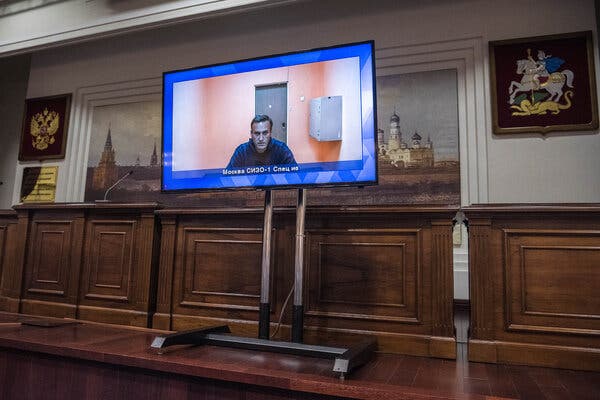 Mr. Navalny at a court hearing in Moscow via video link last week. Many wonder if Ms. Navalnaya will step into the leadership void left by his two-year prison sentence. Credit…Sergey Ponomarev for The New York Times

She assumed the spotlight following the poisoning of Mr. Navalny last August with a military nerve agent — an attack he and Western leaders say was ordered by the Kremlin. Issuing a series of public demands, she extricated him from the clutches of Russian officials so he could be flown in a medically induced coma to Germany for treatment.

“I understood that in this situation, I am the closest person to him,” she later said in an interview. “I am the wife. If I fall apart, then everybody else will in turn fall apart. So, I pulled myself together.”

She continued to speak out after his arrest last month after returning to Moscow. “I am not afraid, and I urge you all not to be afraid either,” she told a crowd of his supporters.

Mr. Navalny’s sentencing on Tuesday ignited a nationwide series of large street demonstrations that have breathed new life into the Russian opposition, cemented Mr. Navalny’s position as the paramount opponent of President Vladimir V. Putin and raised expectations that Ms. Navalnaya will take on a more prominent role.

The couple met on a beach in Turkey 23 years ago, and before the poisoning last summer, lived in an apartment in Moscow in a crucible of surveillance and repression. Ms. Navalnaya, 44, who has an economics degree, worked at a bank before the birth of the first of their two children, and has over the past decade been a homemaker.

“Our family has for many years lived in a way where searches, arrests and threats are commonplace,” she wrote on Instagram in 2018.

And while it remains to be seen whether she will decide to take the lead while Mr. Navalny is in prison, she had proven to her friends and supporters that she has what it takes.

“Yulia Navalnaya is a unique flower” in an otherwise uninspiring lineup of Russian political wives, a commentator, Anna Narinskaya, wrote in an essay of her prominent role in recent months.

“It’s not because she is the wife of an opposition politician,” Ms. Narinskaya wrote, “but because she has so naturally united two difficult-to-combine elements — the position of the wife of an accomplished man and that of a woman who controls her own fate.”

Women are now mostly sidelined in Russian politics, making up only 16 percent of the lower house of Parliament and just a few senior posts outside government roles deemed appropriate in Russian political culture for women, such as in the health or education ministries.

Even the post-Soviet political opposition has been dominated by men despite its moral clarity on other issues of human rights, said Alena Popova, a co-founder of You Are Not Alone, a women’s rights organization in Moscow.

Yet Russia has one of the largest gender imbalances in the world, with 11 million more women than men in the population because of a high male mortality rate, leaving many issues important to women unaddressed.

“Yulia fits wonderfully into the agenda of our country now,” said Ms. Popova, who would like to see her speak out more forcefully. “She is a mother, she is a wife of an imprisoned husband and she has the story of a woman who did not want to enter politics until the rotten system pulled her in.”

Mr. Navalny has himself been accused of sexism. But he said the allegation sprang from a misunderstanding after he called his wife a “little chick” in an online post, saying it was a term of endearment. He defended himself by saying he has hired more women than men in his organization.

Oddly enough, Russian state media have been among the most vocal in promoting the idea of Ms. Navalnaya taking over leadership of the opposition, as happened in neighboring Belarus last year when Svetlana Tikhanovskaya stepped in to run for president in the place of her jailed husband.

But the media’s discussion about her potential role has been dismissed by senior figures in Mr. Navalny’s organization as a trap designed to distract attention from Mr. Navalny while he is imprisoned and potentially blunt calls for his release, while also depicting him as the henpecked puppet of a domineering wife.

“The male character of Yulia Borisovna influenced the division of power within the family,” reported NTV, a pro-government channel, referring to Ms. Navalnaya by her patronymic name. “She raises the children and, like a tyrant, controls everything at home.”

As ludicrous as the Russian propaganda line may be, Mr. Navalny, for one, is convinced of his wife’s powers, saying she saved his life.

In the Berlin hospital, he emerged from his coma, confused, unable to recognize faces and hallucinating about doctors discussing replacing his legs with prosthetics. “It was like ‘Fear and Loathing in Las Vegas,’” he said in an interview with Yury Dud on a popular YouTube channel.

“Finally, I sensed, I understood, that this was Yulia coming to me, adjusting my pillow, and this was important to me,” he said. “I waited for her all the time.”

He added, “I am incredibly grateful.”