When I was growing up, I could never tell if my parents were wildly in love or careening toward divorce. I awoke some mornings to the noise of their voices climbing, straining to make out their words from two rooms away. Other times I’d catch them planted in the middle of the couch watching “Moonstruck,” their hair back then ink-dark like Cher’s.

“I can’t understand why you people just can’t get along,” my Sicilian grandmother would scold when she saw them fight. As I matured, I began to understand that, since they had married young (my mother was 18, my father 24), they were still forging their identities independently of the other. Early in their marriage, they juggled teaching full-time and working toward higher degrees while raising my two older sisters, 10 and 14 years my senior. Their relationship was bound to have its cracks.

It wasn’t until my late 20s when I started a new tradition — spending a week with them every winter in Florida — that I learned that the foundation of Cathy and Andy DePino’s 57-year marriage is anything but a fixed layer of stone. It thrives with fluidity and motion, like dancing.

[Sign up for Love Letter and always get the latest in Modern Love, weddings, and relationships in the news by email.] 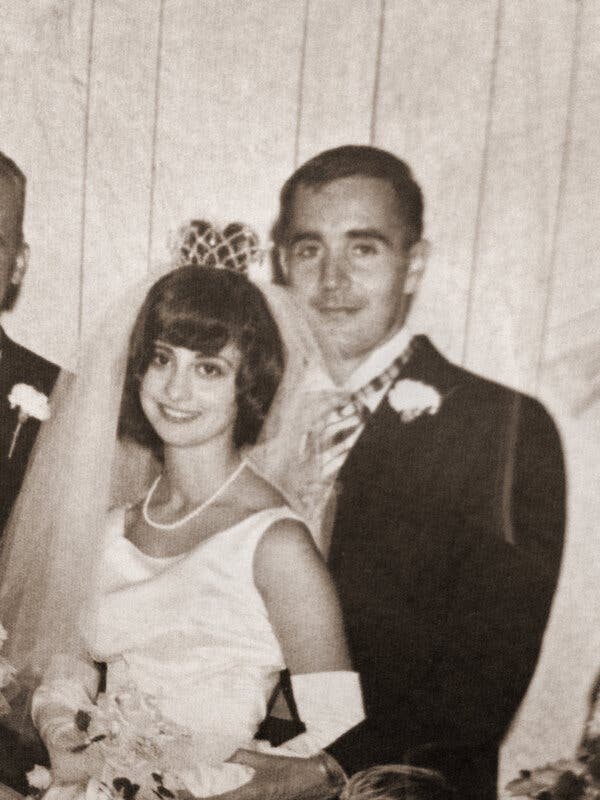 The author’s parents on their wedding day.

Trip after trip, year after year, night after night, my mother would don a flowing skirt, sparkling costume jewelry and sole-worn sneakers and say, “Let’s go to the dance!” Translation: Let’s go to the bar with the live band and dance until they kick us out.

On my latest visit before the pandemic, it was almost 9 p.m., and even though my parents are both close to four decades older than me, I was the tired one. It’d been one of those family vacations with every hour accounted for — swimming, eating, beach-walking, eating, and more eating of mostly rich Italian dishes and sundaes for dessert.

At “the dance,” all the windows and doors were open, and “I Love Music,” by the O’Jays, the Philadelphia soul band, had people discoing on the sidewalks and in the streets. Sticking to the beat, my mother shimmied her way through a sea of bopping “old people,” as she kiddingly called her peers, to snag prime space on the indoor dance floor. She didn’t glance back at my father and me; she trusted we’d keep up.

The first time she’d taken me there, I’d asked why we don’t dance out in the open air. “The bar closes the doors at 10 so they won’t wake the dead living in the apartments nearby,” she had said. “Best to get a spot inside.”

Dancing has played an important role in the DePinos’s 57-year marriage.

Once we were near enough to the speakers that we could feel the bass in our chests, my mother lifted her dramatic Natalie Wood eyes, raised her arms, and let the funk rhythm take her. The trumpet theme repeated. My dad grooved too, his stiff hips loosening as the music drove on. My mother momentarily left her reverie to point out that, in the spot where we stood, on a night I’d stayed in to work, “the craziest thing happened.” Two “old men” had tapped my father on the shoulder and asked if they could dance with her. “Dad told them off,” Mom shouted over the music, her eyes popping. “He said, ‘My wife wouldn’t give you a second look,’ and then the men slithered away.”

“Nobody dances with my wife but me,” Dad said to us, joking. Or was he serious? Just then, the band’s bluesy version of “At Last” swelled, and like a spell, it dissolved the crowd in twos. My father clasped his arms behind my mother’s back; she wove hers around his shoulders. I had no one to dance with, and that was just fine. This was my chance to record a video.

“Dance with us,” my father said into the lens of my phone.

It took no time for him to forget he had invited me to join them, for him and my mother to see each other as the only ones there. I know their worried looks; I’d seen them more than I would like. But here, my father smiled, his lips hardly apart, the way he does in moments I’ve seen him truly happy. Like the morning his first grandson was born and the day I got a call back on Broadway. Like the August afternoon at the shore when the power went out and we stared at the periwinkle clouds with bright pink cores, a sundown undeterred by artificial light.

My mother was relaxed and happy too, which isn’t the easiest state for her to reach. But dancing with my dad took her there. Her impossibly large eyes were soft. I’d picked up on that same softness earlier that evening on the pier, when we saw the sun fall beneath the sea, surrounded by other sunset chasers. “There it is,” she’d said. “There it is.”

As I faded into the dim warmth of the dance floor and witnessed my parents dancing, I felt a weightless understanding between them that I never knew before. I’ve seen my parents at the height of distress and at the fathoms of despair — when they lost their own parents, when my father lost his younger brother. I’ve heard them yell and blame and slam their doors. And I’ve seen them release it all for that soft, familiar look they find mid-slow dance, never looking away.

It takes faith on the observer’s part to detect such love. Recently, I began to see that my discovery had nothing to do with the tangible details of the moment, nothing to do with the dancing or the music.I could tell that my parents were in love because what I saw in their faces was a live memory, a living promise, a life-giving leap — that they could always, always return to each other and know the other would be completely there, completely present.

They’ve lived a half of a century together. They’ve learned if you bend and you move, the person you’ve been looking to all your life does the same. Sometimes it takes something as simple as a slow dance, or a sunset for a lifetime of love to become incandescent.

During my visits, I took videos, too, of the afternoons my parents and I watched the glowing, tangerine sphere disappear into viridian blue, bordered by crowds of people, all of us bearing witness to the mortal moments we ache to hold on to.

I reverse the camera to see our faces together. The light breathes through us, encasing us in rose-lit gold. It bounds our hair, theirs bronzed with age, mine ink-dark like theirs once was. We are outlined, immortalized by flame-colored light.

I turn the camera back toward only them, their hands entwined.