Immediately after the attack on the U.S. Capitol, all corners of the political spectrum repudiated the mob of President Trump’s supporters. Yet within days, prominent Republicans, party officials, conservative media voices and rank-and-file voters began making a rhetorical shift to try to downplay the group’s violent actions.

In one of the ultimate don’t-believe-your-eyes moments of the Trump era, these Republicans have retreated to the ranks of misinformation, claiming it was Black Lives Matter protesters and far-left groups like Antifa who stormed the Capitol — in spite of the pro-Trump flags and QAnon symbology in the crowd. Others have argued that the attack was no worse than the rioting and looting in cities during the Black Lives Matter movement, often exaggerating the unrest last summer while minimizing a mob’s attempt to overturn an election.

The shift is revealing about how conspiracy theories, deflection and political incentives play off one another in Mr. Trump’s G.O.P. For a brief time, Republican officials seemed perhaps open to grappling with what their party’s leader had wrought — violence in the name of their Electoral College fight. But any window of reflection now seems to be closing as Republicans try to pass blame and to compare last summer’s lawlessness, which was condemned by Democrats, to an attack on Congress, which was inspired by Mr. Trump.

“The violence at the Capitol was shameful,” Rudolph W. Giuliani, the president’s lawyer, tweeted at 6:55 a.m. the morning after the attack. “Our movement values respect for law and order and for the police.” But now, in a new video titled “What Really Happened on January 6th?” Mr. Giuliani is among those who are back to emphasizing conspiracy theories.

“The riot was preplanned,” said Mr. Giuliani, the former mayor of New York City. “This was an attempt to slander Trump.” He added, “The evidence is coming out.”

For months, Republicans have used last summer’s protests as a political catchall, highlighting isolated instances of property destruction and calls to defund the police to motivate their base in November. The tactic proved somewhat effective on Election Day: Democrats lost ground in the House of Representatives, with Republican challengers hammering a message of liberal lawlessness. About nine of every 10 voters said the protests had been a factor in their voting, according to estimates from A.P. VoteCast, a large voter survey conducted for The Associated Press by NORC at the University of Chicago. Nearly half of those respondents backed Mr. Trump, with some saying they worried that the unrest could disrupt their communities.

Republicans are now using the looting to try to explain away the Capitol attack. The result, for some Republican voters, ranges from doubt to conspiratorial thinking.

Suzanne Doherty, 67, who traveled from Michigan to be in Washington on Jan. 6 to support Mr. Trump, came away feeling confused and depressed over the invasion of the Capitol and not trusting the images of the mob.

“I heard that on Antifa websites, people were invited to go to the rally and dress up like Trump supporters, but I’m not sure what to believe anymore,” she said. “There were people there only to wreak havoc. All I know is that there was a whole gamut of people there, but the rioters were not us. Maybe they were Antifa. Maybe they were B.L.M. Maybe they were extreme right militants.”

The conjecture that the mob was infiltrated by Black Lives Matter and Antifa has been metastasizing from the dark corners of the pro-Trump internet to the floors of Congress and the Republican base, even as law enforcement officials say there is no evidence to support it. Law enforcement officials are now flagging threats of violence and rioting leading up to President-elect Joseph R. Biden Jr.’s inauguration.

That has not stopped Republican lawmakers and some of their constituents from pushing these narratives to defend Mr. Trump. 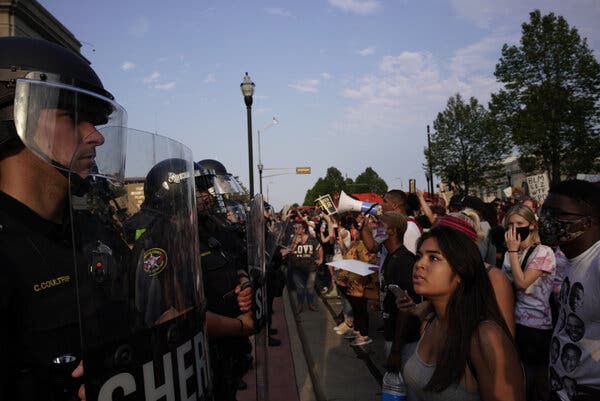 Protesters and police officers faced each other in Kenosha, Wis., in August, the day after a police officer shot Jacob Blake. Many Republican and Democratic voters said the summer’s protests over police violence had been a factor in how they voted in November, for varying reasons.Credit…Carlos Ortiz for The New York Times

Interviews with voters this week in Kenosha, the southeast Wisconsin city that was roiled by a high-profile police shooting last summer, captured the yawning split along ideological and racial lines. Democrats pointed to the differences in motivation between the Capitol mob and the mass protests of the Black Lives Matter movement, which was not seeking to overturn an election or being incited by the president. Republicans saw the Capitol attack as the work of outsiders or as justified by the summer’s isolated incidents of looting and property destruction.

“I think the goal was to try to put some final nails in the coffin of Donald Trump,” said Dale Rovik, a 59-year-old who supports Mr. Trump and is a native of Kenosha. “I think it’s pretty clear that they did that to make him look bad and to accuse him and, of course, to try and impeach him again. That certainly is pretty clear to me.”

Joe Pillizzi, a 67-year-old retired salesman in Kenosha who supports Mr. Trump, said he believed last summer’s looting and rioting had “put a seed” in the minds of the mob that attacked the Capitol.

“If the Black Lives Matter didn’t do what they did, I don’t think the Capitol attack would have happened,” he said.

Democrats have also seized on a point of conservative hypocrisy. For all the talk of supporting “law and order,” this month’s attacks pitted a violent mob against Capitol Hill law enforcement personnel, and a police officer was killed.

Dominique Pritchett, a 36-year-old mental health therapist in Kenosha who supports Black Lives Matter, said the events of the summer were being portrayed inaccurately by the right, while the Capitol rioters were treated far more softly by the police than peaceful Black Lives Matter protesters were.

“No, the protests did not turn violent; the looting and rioting started,” she said. “No violence is acceptable; I think we all can agree to that.” Referring to the Capitol rioters, she said: “They are tearing up one of the most protected and prestigious places in the United States because No. 45 lost. Someone lost an election, versus Black and brown people getting gunned down and killed every day.”

The misinformation on the right reflects the mood of Mr. Trump’s most ardent base, the collection of elected officials in deep-red America who have consistently rationalized his behavior in crises. But other signs indicate that some Republicans are exasperated by Mr. Trump and his actions in a way not seen since he entered office.

A new Pew Research poll released Friday showed the president’s approval rating dropping sharply among Republicans since he inspired the mob violence, cratering to an all-time low of 60 percent, more than 14 percentage points lower than his previous nadir. Among Americans at large, Mr. Trump’s approval rating was 29 percent, a low since he took office in 2017, and he had a 68 percent disapproval rating — his highest recorded number.

Mr. Trump’s loyalists are increasingly relying on conspiracy theories and misinformation to explain the mob violence at the Capitol this month.Credit…Doug Mills/The New York Times

In the House, 10 Republicans voted to impeach Mr. Trump for a second time, making it the most bipartisan effort of any impeachment effort in the country’s history. Mitch McConnell, the Senate majority leader, has signaled a desire to rid the party of Mr. Trump. And in recent days in Washington, some Republicans spoke out about the misinformation that had spread through the ranks of the party’s base and its elected officials.

Representative Peter Meijer, a Republican freshman who voted to impeach Mr. Trump, said in an interview with “The Daily,” The New York Times audio podcast, that the prevalence of false information among the base had created “two worlds” among congressional Republicans — one that is based in reality and another grounded in conspiracy.

“The world that said this was actually a landslide victory for Donald Trump, but it was all stolen away and changed and votes were flipped and Dominion voting systems,” Mr. Meijer said, describing what he called a “fever swamp of conspiracy theories.

Their words, contrasted with Mr. Trump’s own message and that of many supporters, highlight a challenge for the Republican Party. The rioters targeted law enforcement personnel, members of Congress and even Vice President Mike Pence. However, much of the party’s base and many of its leaders at the local and state levels remain loyal to Mr. Trump.

Another Republican who backed impeachment, Representative Tom Rice of South Carolina, acknowledged in an interview with The Associated Press that he was likely to face a G.O.P. primary challenger in his 2022 re-election effort because of his vote — a threat the other nine Republicans who voted for impeachment will probably face as well.

“FIRST G.O.P. Primary Challenger Announces Run in Michigan Against Freshman Rep. Meijer — One of 10 G.O.P. Turncoats,” read a headline on Gateway Pundit, the right-wing and often conspiratorial news outlet that has amassed influence among Mr. Trump’s base.

Reached by email, the site’s founder, Jim Hoft, did not reply to questions but did send along several of his own news articles related to claims of Antifa involvement in the Capitol attack — citing the case of a man named John Sullivan, whom the right-wing media has dubbed an “Antifa leader” in efforts to prove its theory of infiltration. He was the same man cited by Mr. Giuliani in tweets that threatened to “expose and place total blame on John and the 226 members of Antifa that instigated the Capitol ‘riot.’”

Interviews with local and state Republican officials show the long-term effects that the amplification of misinformation has among the party. While few members of Congress have agreed with Mr. Trump’s assertion that his actions were “totally appropriate,” several party officials did. And while many Republicans condemned violence, attacks on law enforcement personnel and the killing of a Capitol Police officer, Brian Sicknick, they did not agree that those things were the work pro-Trump mobs acting in the president’s name, as is the consensus among law enforcement officials.

After the pro-Trump mob stormed the Capitol, some Trump supporters tried to explain away the attack by citing isolated incidents of looting and property destruction over the summer.Credit…Jason Andrew for The New York Times

“I do not believe President Trump should be blamed for what happened in D.C. on Jan. 6 any more than the media should be blamed for the carnage in Minneapolis, Portland, Dallas or Seattle,” said Ed Henry, a former campaign chair for Mr. Trump in Alabama. “The attack on the Capitol has not shaken my confidence in President Trump. I still support him.”

Eileen Grossman, a Republican activist from Rhode Island who worked on Mr. Trump’s campaign, dismissed the violence as the work of outside agitators.

“I know that the violence was caused by bad actors from Antifa and liberal progressives as well as Black Lives Matter,” Ms. Grossman said, without citing any evidence. She added, using an acronym for “Republicans in name only,” that the Republicans who voted for impeachment would face primary challengers. “They are RINOs and traitors.”

Ms. Grossman has recently left Rhode Island because, in her words, she “wanted to live in a red state.” She moved to Georgia, a historically Republican state that in the last three months has voted for Mr. Biden in the presidential election and sent two Democratic candidates to the Senate.

“Obviously I chose poorly,” she said.