WASHINGTON — Representative Jim Jordan of Ohio comes from a duck-shaped district that stretches across parts of 14 counties and five media markets and would take nearly three hours to drive end to end.

Designed after the 2010 census by Ohio Republicans intent on keeping Mr. Jordan, then a three-term congressman, safely in office, the district has produced the desired result. He has won each of his last five elections by at least 22 percentage points.

The outlines of Ohio’s Fourth Congressional District have left Mr. Jordan, like scores of other congressional and state lawmakers, accountable only to his party’s electorate in Republican primaries. That phenomenon encouraged the Republican Party’s fealty to President Trump as he pushed his baseless claims of election fraud.

That unwavering loyalty was evident on Jan. 6, when Mr. Jordan and 138 other House Republicans voted against certifying Joseph R. Biden Jr. as the winner of the presidential election. Their decision, just hours after a violent mob had stormed the Capitol, has repelled many of the party’s corporate benefactors, exposed a fissure with the Senate Republican leadership and tarred an element of the party as insurrectionists.

But while Mr. Trump faces an impeachment trial and potential criminal charges for his role in inciting the rioting, it is unlikely that Mr. Jordan and his compatriots will face any reckoning at the ballot box.

Almost all of them are guaranteed to win re-election.

Of the 139 House Republicans who voted to object to Mr. Biden’s Electoral College victory, 85 come from states in which Republicans will control all levers of the redistricting process this year. An additional 28 represent districts drawn by Republicans in 2011 without Democratic input in states where the G.O.P. still holds majorities in state legislative chambers.

Taking a position as inflammatory as refusing to certify a free and fair election would be much riskier for lawmakers in Congress and in statehouses if they needed to appeal to electorates beyond their next sets of primary voters — a group that itself remains loyal to the outgoing president.

“With redistricting coming up this year, many members clearly made the decision that the bigger risks they faced were in the primary, and whatever risk they faced in the general election, the next round of gerrymandering would take care of that,” said Michael Li, a senior counsel for the Democracy Center at the Brennan Center for Justice.

Not all of the House members who declined to certify the election results were from Republican-controlled states. Representative Mike Garcia of California, from a competitive district north of Los Angeles, voted against certification, as did Representative Paul Gosar of Arizona, where the redistricting authority is independent. 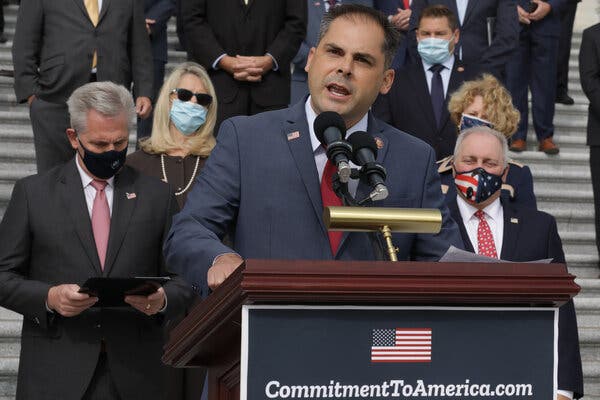 And some political scientists maintain that grass-roots movements and the whims of big donors can be more influential than gerrymandering as a cause for incumbents to drift to more extreme positions.

Democrats, too, have been guilty of gerrymandering, particularly in states like Maryland and Illinois, and lawmakers in New Jersey drew a rebuke from national Democrats for their efforts to write a form of gerrymandering into their state Constitution in 2018 (they ultimately withdrew it). But Republicans have weaponized gerrymandering far more frequently, and to greater effect, across the country than have Democrats.

With Republicans running strong in November’s down-ballot contests, the party is poised to draw favorable district lines for the next decade, cementing control of state governments and congressional districts in the large battleground states of Georgia, Florida, Ohio and Texas.

Republicans control state legislative chambers and governor’s mansions in 23 states; in seven others, including Michigan, Pennsylvania and Wisconsin, Republicans control the legislatures, but the governors are Democrats who would most likely veto new district maps, setting up court battles later this year.

Mr. Jordan’s district, which snakes from the western Cleveland suburbs south to the Columbus exurbs and then west, nearly touching the Indiana state line, has made him invulnerable to Democratic opponents. It has also made the task of a Republican primary challenge virtually impossible, given the logistical hurdles of building an appeal across an array of otherwise disconnected communities.

“It takes two and a half hours to drive from where I live in Oberlin to the farthest point in the district,” said Janet Garrett, a retired kindergarten teacher and a Democrat who ran against Mr. Jordan three times. “The district is shaped like a duck, and I live up in the bill of the duck.”

The Republican-drawn maps in Ohio haven’t just insulated Trump allies like Mr. Jordan. They have also resulted in an emboldened state Legislature that has aggressively pushed back against efforts by the Republican governor, Mike DeWine, to combat the coronavirus. Republican lawmakers pushed out Mr. DeWine’s public health director, sought to have Mr. DeWine criminally charged over his imposition of statewide public health restrictions and late last year filed articles of impeachment against Mr. DeWine.

The political atmosphere in Ohio has left Republicans striving hard to stress their Trump loyalties while leaving Democrats demoralized.

“It’s very hard to recruit candidates — they basically know that they can’t win,” said David Pepper, a former chairman of the Ohio Democratic Party. “Even if they were running in 2020, the outcome of their race was determined in 2011 when the map was finalized.”

Though both parties have gerrymandered some congressional districts in states across the country, the current maps favor Republicans; as a result, they have to win a smaller share of votes nationally in order to maintain control of the House, and therefore the speakership.

“There’s a substantial bias favoring Republicans in the House,” said Nick Stephanopoulos, a law professor at Harvard Law School. “When Democrats win the popular vote by three or four points, like they did in the last election, they barely, barely win control of the House. If Republicans were to win the national vote by three or four points, they would have a very large majority in the House, as they did in 2014.”

He continued, “Absolutely, at the moment, gerrymandering is artificially suppressing the numbers of Democratic votes in the House.”

The protections afforded by partisan gerrymandering extend even further in state legislative races, where the lack of national attention has allowed some Republican-controlled legislatures to build significant advantages into the maps, even though a statewide party breakdown might favor Democrats.

Take Michigan. It has often been a reliably Democratic state when it comes to statewide federal elections, having elected only Democratic U.S. senators since 2001 and having voted for Democrats for president every election since 1988, except for 2016.

In 2020, for instance, the vote share for State House races in Michigan was essentially a 50-50 split between the two parties, according to data from The Associated Press, with Republicans holding a slim 14,000-vote lead. But Republicans retained a 58-52 advantage in the House, or a split of roughly a 53 percent to 47 percent.

Similar advantages were evident in Pennsylvania and Wisconsin, in ways that proved favorable to Mr. Trump. Republican-controlled legislatures in both of those states, as well as Michigan, held hearings into the election following pressure from Mr. Trump and his allies, with Democrats and election experts condemning the evidence-free sessions as feckless attempts to please the president.

“If you didn’t have the gerrymandering in Michigan, Pennsylvania and Wisconsin, you might well have Democratic control of those legislatures,” said Mr. Stephanopoulos, the Harvard professor, “and with Democratic control of the legislatures, they never would have tried to suppress voting or delayed the processing of the ballots or considered any of Trump’s various schemes to overturn the election.”

As for Mr. Jordan, he received a coveted shout-out from Mr. Trump during the Jan. 6 rally that precipitated the Capitol riot.

“For years, Democrats have gotten away with election fraud and weak Republicans,” Mr. Trump said. “And that’s what they are. There’s so many weak Republicans. And we have great ones. Jim Jordan and some of these guys, they’re out there fighting. The House guys are fighting.”