At around noon on Saturday, the climbers inched into the infamous passage called the Bottleneck on K2, the second-tallest mountain in the world and one never before conquered in winter.

The sky was clear, the wind manageable and the summit just beyond this final and most perilous stretch.

If they could navigate the Bottleneck, the team of 10 Nepalese climbers, led by Nirmal “Nimsdai” Purja, 37, would likely become the first to climb K2 in winter. But Purja knew it was best to ignore the history athis frostbitten fingertips, and focus on taking one step at a time.

A gleaming, glacial 28,251-foot monolith that straddles the border of China and Pakistan, K2 has retained the same perfunctory name annotated on an original 19th-century British surveyor’s map of the Karakoram range.

Since the 1950s, it has also been known as Savage Mountain for its deadly reputation. For every four climbers who reach its summit, one dies. By comparison, the death rate on Mount Everest has been around 1 percent since 1990.

That thin margin for error was underlined on Saturday, when Sergi Mingote, a Spanish climber who had reached 10 of the world’s highest peaks without supplemental oxygen, fell to his death much lower on the mountain.

The tragedy occurred hours after the Nepalese funneled through the Bottleneck, an hourglass-shaped gully that runs beneath an unstable overhanging ice cliff, called a serac. The serac routinely sheds enormous blocks of ice. Even before they reached the Bottleneck, the climbers saw foreboding debris fields.

“Some pieces were the size of a house,” Purja said from base camp on Monday. “You get intimidated by that. But if it’s your day, it’s your day. I was just praying to the mountain. This time we needed passage, and the mountain allowed us permission.”

The trick was not to rush. Elevations above 26,000 feet are in the so-called Death Zone. And though any climber caught in the Bottleneck at the wrong time faces certain injury and likely death, getting spooked and moving too fast at that altitude could bring a slow death.

Linked to a rope they’d fixed to the ice, Purja, and the other climbers stepped around such unspoken truths like so many shattered ice houses. It certainly helped that all but Purja were breathing supplemental oxygen, but even climbers on oxygen have been known to become lethargic and lose mobility.

“And if your oxygen canister runs out,” said the climber and cinematographer Renan Ozturk, “you could just shut your eyes for a second, and never wake up.”

Central Asia is home to all 14 of the world’s 8,000-meter (26,246 feet) peaks. All but K2 had been climbed in both summer and winter. Thanks to its remote location, avalanche prone slopes, temperatures hovering around minus-60 degrees Fahrenheit, and hurricane-force winds, a winter ascent of the mountain was the last great challenge remaining for serious mountaineers. Many considered it impossible. 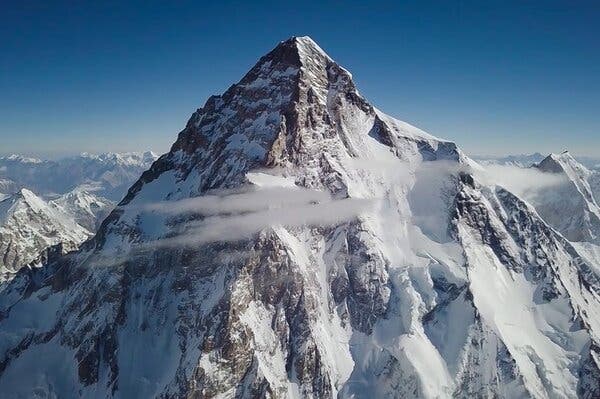 Even a successful spring or summer climb of K2 is rare. Fewer than 400climbers have been to its apex. More people have been to outer space than have stood its summit.

There had been six prior winter attempts over the years, the most recent a failed Polish expedition in 2018.

But the Nepalese climbers making their way this weekend were born in the Himalayas and nine of them were Sherpa.

For generations, since Tenzing Norgay and Edmund Hillary became the first to climb Mount Everest, in 1953, Sherpa people have worked as guides, facilitators and collaborators on countless historic mountaineering feats. Yet they have often been rendered invisible by the global lens and have seldom received their due. Hillary was knighted by Queen Elizabeth after the Everest triumph. Norgay was not. And none have been credited with first ascents in Nepal.

Yet experienced Alpinists know that Sherpa people are among the strongest mountaineers and are unparalleled at altitude because they were born and raised in thin air.

And this group was climbing for themselves. The lines they fixed weren’t for well-funded international climbers seeking fame or glory. They were for them to claim a piece of history for their country.

Of course, if not for the coronavirus, none of them would have been there.

The pandemic suspended the spring climbing season in Nepal. With no foreign climbers in the mountains and no way to make a living, the Nepalese climbing community was frustrated and bored. Mingma Sherpa, chairman of Seven Summit Treks in Kathmandu, and his brothers Tasha and Chhang Dawa, a veteran of multiple successful K2 ascents, broke the spell by plotting an audacious winter expedition to K2.

In June, the brothers put out feelers on social media and more than two dozen international climbers signed on. As did two Nepali teams that the brothers thought had the best chance at success.

Team Nimsdai, made up of six climbers, was led by Purja, a former Nepalese soldier and British special forces operator who — after retiring from the military — burst onto the climbing scene in 2019 when he climbed all 14 8,000-meter peaks in six months and six days, shaving more than seven years off the world record.

Purja is Magar, not Sherpa, but he formed a team that included five Sherpa climbers. The team included Geljen Sherpa, who climbed several Himalayan peaks with Purja in 2019, and Mingma David Sherpa, best-known for rescuing 52 climbers from the slopes of Everest in a single season in 2016.

Together they and a team of local Pakistani porters hauled 70 camp tents, six dining tents and 30 specially designed high-altitude tents on a spectacular weeklong 60-mile trek through the snow to base camp at roughly 17,000 feet. They also packed thousands of meters of rope, dozens of ice screws, rock pitons, supplemental oxygen and kerosene, 360 pounds of meat, and 400 pounds of chocolate, cookies and energy bars.

It had been decided before their arrival that all the climbers at base camp would follow the standard Abruzzi route that winter. On Dec. 26, Purja and his team stuffed their packs with rope, tents, and four days of food, and climbed the 40-degree slope to Camp I at 20,013 feet to begin their first four-day rotation at high altitude, to acclimatize to the conditions. The next day, they moved on to Camp II at 21,982 feet where they pitched tents beneath rock ledges offering meager shelter in the howling wind.

On Dec. 28, Purja’s radio chirped. Team Mingma G were busy fixing lines to the mountainside that all the teams could use during the winter season. And they needed help if they were to finish running lines all the way to Camp III. Four members of Team Nimsdai were too spent and descended to base camp, but Purja and Mingma Tenzi, pushed up to 23,000 feet to lend a hand. By the time everyone had returned to base camp on New Years Eve, Purja had frostbitten fingers, and two Nepali teams had joined forces.

That’s when the weather turned fierce. Beginning on Jan. 5, winds roared down the K2 slopes at speeds up to 60 miles per hour, for days. As his tent rattled, Purja worried about damage at Camp II, but he couldn’t assess the situation until the weather cleared on Jan. 10.

Nirmal Purja before his winter attack on K2, on Jan. 5.Credit…Pool photo by Red Bull Content

When they arrived, they discovered that their tents, stocked with all their cooking gear, sleeping bags, mattresses and lifesaving technical clothing — including heated insoles, gloves and base layers — had disappeared. Was it buried in snow? Blown off the mountain? It didn’t matter, it was gone.

Finally, a weather window opened on Jan. 13 and the 10 Nepalese climbers set off from base camp for their first attempt at the summit. Each of the them carried over 70 pounds of gear on their climb back up to Camp II, where they spent the night.

The next day they traversed a section known as the Black Pyramid, a gauntlet of exposed, vertical rock, and a deep chasm in the ice known as the House Chimney. They scrambled up the rock and used a ladder to cross the chasm, and less than an hour later they were back on a 40-degree glacial slope.

The crunch of their crampons digging into the ice marked their steady progress to Camp III, at over 24,000 feet. After making camp they continued fixing lines up to Camp IV at 25,000 feet before descending to Camp III to get some much needed sleep.

They didn’t move again until 2:30 a.m. local time on Saturday. When they unzipped their tents, the domed sky blazed with starlight, but the cold was otherworldly. It was minus-76 degrees Fahrenheit and the cold cut through four layers of clothing, sapping their strength. Then the wind kicked up, blowing snow into their eyes, frosting their eyelashes and eyebrows.

“My body became numb,” Mingma G said from base camp on Monday. “I wanted to abandon the expedition. Others made up their minds to quit too.”

Purja urged them all to continue.

“We all had that common pride, a common goal,” Purja said. “This was for Nepal.” The men took shelter at Camp IV before dawn to rest and warm up. And when the wind died and the sun finally rose, morale brightened. “We’d gone through the pain barrier, and the sun gave us power.,” Purja said.

By 3 p.m. they’d cleared the Bottleneck. Threaded together, strung out like prayer beads, they made the slow march over the shoulder toward the top of K2.

With about 30 feet to spare, the men grouped up, stood shoulder to shoulder and continued as one. They would enter the record books together. Singing the Nepali national anthemthey stepped up to the summit just before 5 p.m., and enjoyed the wintry view nobody had ever seen before.

The mountains of the Karakoram rose like sharks’ teeth, above a deep river valley, glazed with ice and dressed for winter. But even that beauty paled in comparison to the feeling of pride and unity that swelled within, and that was pervasive and palpable among the men.

“It was a proud moment,” Mingma G said. “All of our mountains were first summited by foreigners. That’s why we were desperate to summit K2 this winter.”