WASHINGTON — If President Biden wants to quickly enact his $1.9 trillion stimulus proposal over Republican opposition, Democrats have a powerful tool they could use to do it.

Through a fast-track process known as budget reconciliation, Democrats could muscle through the package — which would provide billions of dollars for vaccine deployment, another round of stimulus checks and an extension of unemployment benefits — on a simple majority vote, bypassing a messy filibuster fight that would require them to win over enough Republicans to reach a 60-vote threshold.

While Mr. Biden has said he wants to abandon the partisan tactics of the past and forge compromises with Republicans, he has also proposed an ambitious plan that stands little chance of broad support from the party. And there is little time to maneuver it through both chambers before jobless benefits lapse in March.

Here is how Democrats could use reconciliation to deliver Mr. Biden’s stimulus plan.

The reconciliation process allows Congress to advance certain spending and tax bills on a simple majority vote, freeing lawmakers from the 60-vote threshold most legislation must meet to be considered.

It begins with a budget resolution, which establishes a blueprint for federal spending and directs congressional committees to write bills to achieve certain policy results, setting spending and revenues over a certain amount of time. Its name refers to the process of reconciling existing laws with those directives.

Since 1980, the first year the process was put in place, 21 reconciliation bills have been enacted into law. Initially envisioned as a mechanism for lowering the deficit, it was used most recently by Republicans to push through President Donald J. Trump’s tax overhaul and in a failed attempt to repeal the Affordable Care Act.

The process is subject to strict rules that limit what can be included.

While reconciliation allows senators to scale procedural and scheduling hurdles, it is also subject to strict limits that could constrain the scope of any pandemic relief package Democrats seek to pass.

In the Senate, the “Byrd Rule,” established by former Senator Robert Byrd of West Virginia, bars extraneous provisions, including any measure that does not change revenues or spending, affects the Social Security program or increases the deficit after a certain period of time set in the budget resolution. It is intended to ensure that the reconciliation process cannot be abused to jam through any unrelated provision.

The rule’s name lends itself to a number of bird-related puns commonly used to describe the stages of the reconciliation process. There is the “Byrd bath,” when the Senate parliamentarian scrubs and analyzes a bill for any provision that violates the rule if a senator raises a concern about a violation. Anything that does not survive the scrutiny is known as a “Byrd dropping,” and is removed from the legislation before it can advance.

In the case of Mr. Biden’s stimulus plan, among the thorniest questions is whether a provision to increase the federal minimum wage to $15 could survive the Byrd bath. Representative John Yarmuth, Democrat of Kentucky and the chairman of the House Budget Committee, said in an interview that such a provision “is just a stretch.” His Senate counterpart, Bernie Sanders, the Vermont independent, has signaled that he believes it is feasible.

G. William Hoagland, a former senior Republican budget official in the Senate, said Democrats could have a difficult time using reconciliation for the wage increase or for funding the reopening of schools. But he suggested that Democrats could try to push the limits, for example, by arguing that increasing the minimum wage nationwide might lead to more income tax revenue.

Vice President Kamala Harris could also overrule the parliamentarian, but that has not been done since 1975.

“The bottom line is there’s a lot they can do, but there’s a lot they cannot do,” said Mr. Hoagland, the senior vice president of the Bipartisan Policy Center. “This is why I think President Biden would prefer not to go down this route and instead do an emergency supplemental appropriations bill.”

Time is of the essence, and reconciliation moves fast.

A budget resolution could be introduced as early next week to start the reconciliation process, but it is unclear how quickly Democrats could move through the process given the legislative parameters and the time constraints of another impeachment trial.

The timing is crucial as the pandemic continues to rage and existing relief programs run their course. Congress faces a deadline of March 14, when the current round of jobless benefits begins to expire. In order to give states time to put a new round of aid in place and prevent unemployed workers from losing access to their benefits, most analysts believe legislation must be passed before the end of February.

“We are all mindful and looking at that timeline in March as to when we will hit the unemployment cliff, and it’s vital to get things done quickly and rapidly, as quickly as possible,” Jen Psaki, the White House press secretary, said at a briefing this week.

The conventional route could be faster — but would most likely result in a smaller bill.

Mr. Biden and top Democrats have said that they would like to pass a relief package with Republican support, and Mr. Biden’s top advisers have begun sounding out lawmakers in both parties to hear concerns and feedback.

“It’s not enough for me just to come up to you and say, ‘I like this — I expect you to support it,’” Mr. Biden said at an event on Monday, adding that he wanted “to make the case to you why I think and what I think” should be included in his $1.9 trillion plan. The House Problem Solvers Caucus, a bipartisan coalition of lawmakers, met with Brian Deese, Mr. Biden’s top economic adviser, on Tuesday. 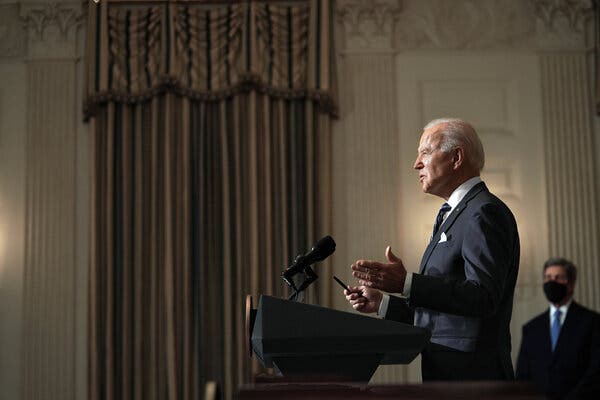 President Biden has said he wants to abandon the partisan tactics of the past and forge bipartisan compromises.Credit…Anna Moneymaker for The New York Times

But securing enough Republican support to clear the 60 votes needed in the Senate to advance the legislation would most likely result in a far more limited proposal. Mr. Biden’s relief proposal is more than double the $900 billion package Congress agreed to in December, and many lawmakers whose backing would be needed have said it is far too large.

While Mr. Biden has not abandoned efforts to secure a bipartisan deal, Democrats in both chambers have begun work on budget resolutions to jump-start the reconciliation process as soon as next week, signaling that they want to be ready to use it if necessary.

Representative Steny H. Hoyer of Maryland, the majority leader, announced this week that he would adjust the House schedule in the coming weeks to “give us the option of using budget reconciliation to advance a Covid-19 package.”