The Dutch cyclist Fabio Jakobsen was battling for the lead near the end of the Stage 1 sprint at the Tour of Poland last summer. A sudden shift in direction by his closest rival, Dylan Groenewegen, forced Jakobsen to swerve, starting a gruesome crash that stunned even observers accustomed to the extreme hazards of the sport.

Going close to 50 miles per hour, Jakobsen collided with the roadside barriers, and then ran into a finish-line official. As the barriers scattered they knocked down a half-dozen other riders, with three too injured to start again the next day.

Jakobsen was airlifted to a hospital and in an induced coma for two days. His injuries included a brain contusion, a fractured skull, a broken nose and a torn palate. For a few days, Jakobsen said later, he thought he would die.

Groenewegen was barred from competition for nine months by the Union Cycliste Internationale, cycling’s governing body, which cited him for “aggressive behavior” — specifically that “he deviated from his line and committed a violation of the U.C.I. Regulations.”

But in the aftermath of the crash, and a few other serious ones that followed, cyclists have increased pressure on the governing body to do more to ensure their safety.

The U.C.I. acknowledged their worries shortly after the crash in Poland, saying in a statement that it was “extremely concerned about safety, with the multiplication of serious crashes” and that “too many serious crashes have occurred recently.” The governing body said it would begin reforming safety conditions.

It is unclear whether the dangers of cycling have became more pronounced in the past year, but by the end of 2020, the U.C.I. had, as promised, revised its safety measures and had pledged to establish a database to better track accidents. At the same time, a new riders’ union rose up to demand more changes.

Laurens ten Dam, a former professional cyclist from the Netherlands, said that social media had helped turned ugly crashes into catalysts for change. “Everybody saw Jakobsen crash on their phone,” he said, “whereas 10 to 15 years ago you had to watch the sports news on TV.”

In December, a U.C.I. council made up of team managers, race organizers and riders presented a list of 14 measures to improve safety during races. The suggested steps, which still need to be translated into rules, included improving safety in risky areas (especially barriers at the finish) and introducing a risk-assessment tool for race routes.

A spokesman for the U.C.I. declined to comment for this story. The organization has also presented new protocols to assess and address cycling-related concussions.

The governing body also said there would be stricter rules for race convoy drivers and stronger regulation of other dangerous conduct, such as riders tossing their used water bottles while racing or using unsafe positions on the bike.

But setting rules is one thing; enforcing them is another. In the past, a union of professional of cyclists known by its French acronym C.P.A., for Cyclistes Professionnels Associés, has threatened legal action against the U.C.I., supported riders’ protests, and asked that routes steer clear of dangerous conditions or not count as part of the race, said Laura Mora, the secretary general of the C.P.A., which is a part of the U.C.I.

Race organizers are supposed to abide by safety measures set by the U.C.I., but there has been a lack of enforcement, Mora said.

Some riders, however, see the C.P.A. as compromised by its relationship with the U.C.I. As a result, an alternative for professional cyclists, The Riders Union, was launched in November. The new union, which is not recognized by the U.C.I., has set improved safety measures as one of its main goals.

“The Riders Union is the big step forward in achieving something because, at the moment, the C.P.A. is useless,” said Jos van Emden, one of Groenewegen’s teammates. “It’s not independent,” he added, “and the U.C.I. is pulling the strings.” Van Emden submitted a list of safety features to be implemented.

Separately, another organization, the Cyclists’ Alliance, the de facto union for female cyclists, is also accusing the U.C.I. and C.P.A. of not sufficiently protecting athletes. It represents 160 riders and, like the Riders Union, is not recognized by the U.C.I. On top of safety measures, the alliance has pressed for measures like a minimum salary and maternity leave.

“They’re not really transparent organizations,” Iris Slappendel, a former professional rider and the executive director of the alliance, said of the governing body and the union embedded in it.

To establish and enforce better safety measures, Van Emden said it was important to have more stakeholders, particularly organizations, involved in conversations. Ten Dam, on the other hand, said having so many different parties involved was “part of the problem,” because that made it harder for riders to speak in unison. 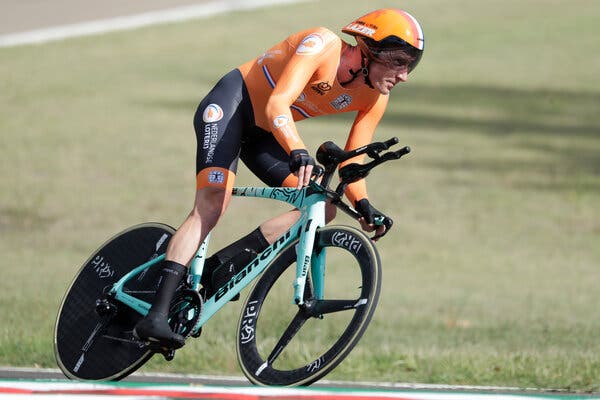 But both cyclists concur on one issue: They say races have become more dangerous.

“Nowadays, there is more road furniture and obstacles on the roads,” Ten Dam said. “When I was racing, and raced in the U.S., I was so happy that there were no roundabouts. They slow down traffic, but it’s dangerous for the riders. It’s like taking three corners instead of going straight in a crossing.”

In the 1980s, the peloton was more stretched out, he said, while now riders are closer to one another, and they ride faster. “Maybe not the average speeds, but the top speeds,” he said.

Speeds have increased because the gear and technology have evolved and because a more scientific approach to training has, in part, leveled the field.

And, Van Emden said, riders have “become more aggressive.” They’re less conscious of one another, he said, “a bit like in society.”

Many people in the cycling community said that the barriers at the Tour of Poland had been inadequate and that the sprint, which took place on a slight descent, should have been on flat ground.

Jakobsen, who has had several reconstructive surgeries since his crash, is now training again on his bike — but he doesn’t know when he’ll be able to race next.

In a recent interview with the Dutch publication AD that was translated to English, he said that his “injuries were also caused by the high speed and the barriers. The barriers didn’t break my fall, they just folded up.”

He added: “Dangerous finishes like the one in Poland must be banned. Speaking for myself, from now on I will not join in a bunch sprint if the barriers are no good.”