The wrenching collapse of Myanmar’s once-celebrated democratic opening had many witting and unwitting accomplices along the way. But its central driver, activists and experts say, was a yearslong power struggle between the military and Daw Aung San Suu Kyi, the country’s civilian leader.

Democratic transitions can be a messy business. Old regimes tend to surrender power slowly, piece by piece. In a transitional phase that might last decades, the authoritarian and democratic systems often operate side by side. If they stay on tolerably good terms, with a shared understanding of their eventual destination, they have a chance to make it.

That was once the hope for Myanmar. The country’s military junta, after decades of iron-fisted rule, in 2011 began handing off power to a civilian government. After her party’s election victory in 2015, that government was headed by Ms. Aung San Suu Kyi, a Nobel Peace Prize recipient for her resistance to the junta through years of house arrest.

But rather than coexisting, both sides spent much of the last few years escalating a bitter and increasingly zero-sum rivalry that, in the end, Ms. Aung San Suu Kyi lost to the side with guns. She is again a prisoner.

Their struggle took place in the context of decades of internal conflict that pitted the army against ethnic and separatist groups, including the military-led ethnic cleansing campaign against the Rohingya Muslim minority. The sense of crisis and siege accelerated Myanmar’s high-level power struggle, which in turn worsened the bloodshed that both sides sought to exploit for political gain.

“In their race to outbid each other,” said Avinash Paliwal, a scholar at the University of London, the two sides “not only failed the peace process, but also short-circuited the gains of democratic transition.”

It’s a model with uncomfortable trade-offs and generational timelines. In Chile, junta leaders surrendered power in exchange for lifelong privileges and protections, many of which were only rolled back 30 years later.

“Thein Sein actually did, early on, act as a kind of de Klerk,” said Aaron Connelly, a Singapore-based scholar at the International Institute for Strategic Studies, referring to the Myanmar junta leader who voluntarily handed off power in 2011. “But Aung San Suu Kyi did not act as a kind of Mandela. And so the partnership that she had an opportunity to forge with Thein Sein never eventuated.” 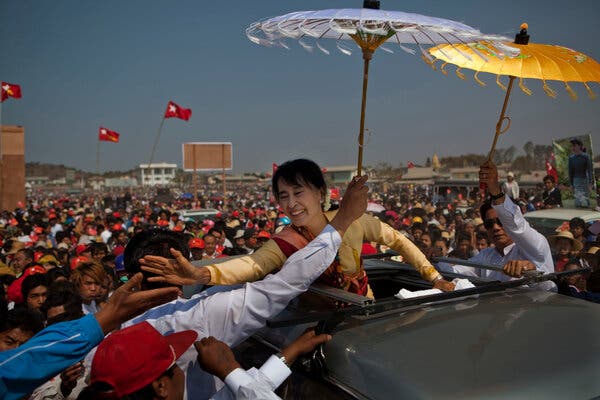 Ms. Aung San Suu Kyi’s critics charge that, rather than keeping Myanmar’s political factions bought in to the democratic transition, she mostly sought to muscle them out. They accuse her of hollowing out her own party, replacing experienced hands with flunkies; purging would-be rivals; heightening restrictions on journalists; marginalizing Myanmar’s minorities in favor of her ethnic Burmese support base; and consolidating what even some members of her party characterize as the beginnings of authoritarian rule.

Even during the height of the military’s systemic killing of Rohingya Muslims in 2017, some activists and civil society leaders told me that they considered Ms. Aung San Suu Kyi nearly as grave a threat to democracy as the military was.

“There’s not a real sign of democratic values,” Kyaw Thu, the head of a pro-democracy group, said. “Anyone not supporting their agenda is the enemy.”

This past November, her government barred huge numbers of Myanmar’s ethnic minorities, who typically support their own political parties, from participating in national elections. Her party then won in a landslide.

Military leaders gradually broke faith as well, as hard-liners clung to, and eventually seized by force, the power they believed was being wrongly taken from them.

“I think they genuinely believed that they would win elections,” Mr. Connelly said, referring to the military’s proxy political party. But that party lost big in 2015 and even bigger this November, curbing the military’s influence.

In between, Ms. Aung San Suu Kyi moved again and again to erode the military’s vestiges of power, which include a guaranteed hold on one quarter of seats in Parliament. Mr. Connelly called this “the riskiest thing she ever did.”

Outsiders often assume that Ms. Aung San Suu Kyi backed the military’s ethnic cleansing of Rohingya Muslims out of political expediency or cynical self-interest. Protecting the generals lest they turn on her.

But many analysts and activists have argued that her stance in defending the army’s Rohingya campaign came from sincere conviction. For years, she had suggested that the Rohingya were illegal foreigners who were backed by shadowy outside powers and who posed a danger to Myanmar’s Buddhist majority.

Her outspokenness, Mr. Paliwal said, had the opposite effect of appeasing the military, instead “outcompeting” them on anti-Rohingya sentiment. Burmese Buddhists filled social media with praise of Ms. Aung San Suu Kyi for her leadership against the Rohingya threat.

Rohingya refugees crossing from Myanmar to Bangladesh in 2017.Credit…Tomas Munita for The New York Times

Meanwhile, officers bore the brunt of international sanctions, including against Senior Gen. Min Aung Hlaing, the military leader who took power in this week’s coup.

This cycle repeated over the next few years as several of Myanmar’s slow-burning insurgencies combusted.

“She was actually much harder-line than the military was,” Mr. Connelly said, referring to a particularly bloody campaign in Rakhine, a long-troubled region. “The military called a cease-fire, and Aung San Suu Kyi was supposed to play her part by calling elections in Rakhine State. She refused to do that, and so the cease-fire went to waste.”

These episodes deepened a sense of zero-sum, even lethal, power struggle, “generating conditions for a conservative revolt” among military officers, said Mr. Paliwal, citing his time on the ground in Rakhine during some of the heaviest fighting.

A bloodless but no less fierce struggle played out in the capital. In January 2020, Ms. Aung San Suu Kyi, apparently hoping to replace the international allies she had lost by defending the military, hosted Xi Jinping, China’s leader, for a state visit.

But Myanmar military leaders widely see China as an enemy that props up their country’s insurgencies. The junta is thought to have handed off power partly as a gambit to break China’s grip on the country, hoping that Ms. Aung San Suu Kyi would bring Western support. Instead, she had Mr. Xi marching through the capital.

Two months later, Ms. Aung San Suu Kyi attempted to push through constitutional amendments that would have gradually shrunk the military’s share of Parliament from 25 percent to 5 percent. Though it failed, it was a political shot across the bow of an institution with the power to fire actual shots in return.

Her party won the November election in a blowout, shrinking the military proxy party’s share of seats even further. General Min Aung Hlaing was set to retire later this year. It may have looked, to the generals, like a window was closing.

Senior Gen. Min Aung Hlaing was given top honors in a display of military leaders’ portraits at a museum in Naypyidaw in 2018.Credit…Minzayar Oo for The New York Times

Political scientists compare democratic transitions to pacts: agreements between the country’s stakeholders that some new system will be better than the old. But if the powers that be come to see change as no longer worthwhile, or see the other parties as no longer trustworthy, the pact breaks.

Myanmar’s military and Ms. Aung San Suu Kyi both chipped away at that pact for years. This week’s coup was only the last in a long series of cuts.

The collapse is in one way a harsh lesson in the grinding difficulty of managing a peaceful transition to democracy from dictatorship — a rarer and rarer phenomenon in this age of retrenching authoritarians and backsliding democracies. But it is also a case of difficult personalities and recalcitrant institutions that proved unwilling or unable to go the distance.

“They changed strategies,” Mr. Connelly said of the generals, “and decided to just seize that power for themselves.”