WASHINGTON — The House on Thursday exiled Representative Marjorie Taylor Greene from congressional committees, blacklisting the first-term Georgian for endorsing the executions of Democrats and spreading dangerous and bigoted misinformation even as fellow Republicans rallied around her.

The House voted 230 to 199 to remove Ms. Greene from the Education and Budget Committees, with only 11 Republicans joining Democrats to support the move. The action came after Ms. Greene’s past statements and espousing of QAnon and other conspiracy theories had pushed her party to a political crossroads.

The vote effectively stripped Ms. Greene of her influence in Congress by banishing her from committees critical to advancing legislation and conducting oversight. Party leaders traditionally control the membership of the panels. While Democrats and Republicans have occasionally moved to punish their own members by stripping them of assignments, the majority has never in modern times moved to do so to a lawmaker in the other party.

In emotional remarks on the House floor, Ms. Greene expressed regret on Thursday for her previous comments and disavowed many of her most outlandish and repugnant statements. She said she believed that the Sept. 11, 2001, attacks “absolutely happened” and that school shootings were “absolutely real” after previously suggesting that aspects of both were staged.

But wearing a mask emblazoned with the phrase “Free Speech,” Ms. Greene did not apologize over the course of her roughly eight-minute speech. Instead, she portrayed her comments as “words of the past” that “do not represent me,” and she warned that if lawmakers wanted to “crucify” her, it would create a “big problem.”

Democrats argued that Ms. Greene’s comments — and Republican leaders’ refusal to take action against her — had required unusual action. In social media posts made before she was elected, Ms. Greene endorsed executing top Democrats, including Speaker Nancy Pelosi; suggested a number of school shootings were secretly perpetrated by government actors; and repeatedly trafficked in anti-Semitic and Islamophobic conspiracy theories.

“You would think that the Republican leadership in the Congress would have some sense of responsibility to this institution,” Ms. Pelosi said. “For some reason, they’ve chosen not to go down that path.”

Republicans themselves moved against Representative Steve King, Republican of Iowa, in 2019 over comments in which he questioned why the term “white supremacist” was considered offensive, stripping him of his committee assignments.

But they refused to take similar action against Ms. Greene. The vote on Thursday presented Republicans with the uncomfortable choice of either appearing to endorse Ms. Greene’s ugly remarks or breaking with their party — and with former President Donald J. Trump, who has effusively praised her. Following the lead of Representative Kevin McCarthy of California, the top House Republican, many argued that although they disapproved of her remarks, they objected to the precedent Democrats were setting.

Ms. Greene also told the House that she had broken away from QAnon in 2018. “I was allowed to believe things that weren’t true,” she said, “and I would ask questions about them and talk about them, and that is absolutely what I regret.”

However, that does not square with a series of social media posts she made in 2019, including liking a Facebook comment that endorsed shooting Ms. Pelosi in the head and suggesting in the same year that Justice Ruth Bader Ginsburg had been replaced with a body double, an element of QAnon’s fictional story line. 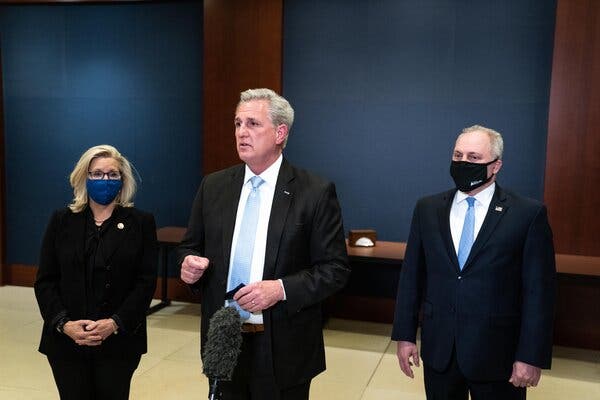 Representative Kevin McCarthy, the minority leader, condemned Ms. Greene’s comments but argued she did not deserve to be punished for them.Credit…Anna Moneymaker for The New York Times

As more revelations about Ms. Greene’s incendiary comments were made public this week, it became clear that Mr. McCarthy would have to address them. At the same time, loyalists to Mr. Trump were agitating to strip Representative Liz Cheney of Wyoming, the No. 3 House Republican, of her leadership post as punishment for voting to impeach him.

The debate of the fates of the two women became a proxy battle over the party’s identity and whether it would continue to embrace the former president or reject his brand of politics.

Ms. Cheney ultimately held on to her post after a lopsided vote on Wednesday night at a lengthy closed-door gathering of Republicans. But that vote was taken by secret ballot, while Thursday’s endorsement of Ms. Greene was a very public affair.

Still, the episode laid bare deep divisions among Republicans about how to move forward as a party. In the days leading up to the vote on Ms. Greene, Senator Mitch McConnell of Kentucky, the most powerful Republican in Washington, had denounced her statements, which he called “loony lies,” saying such conspiracy theories were a “cancer” on the party. Several other top Republican senators had joined him in denouncing Ms. Greene and saying she could not become the face of the party.

In an effort to warn Democrats about the move, House Republicans introduced their own proposal to remove Representative Ilhan Omar, Democrat of Minnesota, from the Foreign Affairs Committee, citing comments she made, including that Israel had “hypnotized the world” from ignoring their “evil doings.” Ms. Omar has publicly apologized for those comments, which drew charges of anti-Semitism.

“If this is the new standard, I look forward to continuing out the standard,” Mr. McCarthy said, adding that Republicans had a “long list” of Democrats they would want to remove from their committees.

On Wednesday, after Democrats had announced they would press forward to rebuke Ms. Greene, Mr. McCarthy issued a lengthy, tortured statement condemning her comments and saying that they had no place among House Republicans, but arguing that she did not deserve to be punished for them. He went further on Wednesday night after Republicans’ contentious, hourslong meeting, telling reporters that Ms. Greene had privately apologized for her previous remarks and suggesting that it was time to move on.

“She said she knew nothing about lasers or all the different things that have been brought up about her,” Mr. McCarthy said, apparently referring to a Facebook post Ms. Greene wrote in 2018 suggesting that devastating wildfires in California had been caused by a space laser controlled by a prominent Jewish banking family with ties to powerful Democrats.

“If we are now going to start judging what other members have said before they are members of Congress, I think it will be a hard time for the Democrats to place anybody on committee,” he added.

Removal from committees is usually reserved for lawmakers who are facing indictments or criminal investigations or who have otherwise broken with their party in a particularly egregious way, according to Eleanor Neff Powell, a professor of political science at the University of Wisconsin-Madison.

Ms. Powell, who studies Congress and the committee assignment process, said the most comparable case to Ms. Greene’s situation was when Mr. McCarthy stripped Mr. King of his committee posts. Mr. King lost a primary battle in 2020 after his opponent made the congressman’s inability to legislate on committees a central theme of his campaign.

House Republicans passed an internal rule in 2018 mandating that lawmakers facing felony indictments could not serve on committees, a measure that barred two of their members at the time from their posts, including Duncan D. Hunter of California, who was ultimately convicted of violating campaign finance laws and who refused to give up his assignments.

But the majority party, at least in modern history, has never before leveraged its power to dictate the minority party’s committee assignments.

“Typically the party has asked the person to step aside, they’ve taken the vote themselves, and then the chamber as a whole takes a vote to confirm that action,” Ms. Powell said.

Mr. McCarthy told reporters on Wednesday evening that he had offered to remove Ms. Greene from her two committees and to put her on a panel overseeing small businesses instead, but Democrats declined the offer, he said, insisting that Ms. Greene should not sit on any committees.

Democrats, who have been particularly incensed by Ms. Greene’s previous calls for violence after the Jan. 6 attack on the Capitol, have insisted that Ms. Greene’s conduct demanded extraordinary measures.

“If anybody starts threatening the lives of members of Congress on the Democratic side, we’d be the first to eliminate them from committees,” Ms. Pelosi said.