Of Hank Aaron’s 755 career home runs — a total surpassed only by Barry Bonds — it was the 715th that defined him. It was that home run that pushed Aaron past Babe Ruth as the sport’s career leader, and the abuse he took to get to that point became a huge part of his legacy.

Al Downing had the distinction of allowing No. 715 on April 8, 1974. A left-handed starter for the Los Angeles Dodgers, Downing left a 1-0 fastball up and over the plate. Aaron, as he had done so often, pounced on the pitch, driving it into the bullpen in left-center field at Atlanta Stadium.

Forever linked by that swing, Downing immediately embraced his part in Aaron’s feat. On Friday, Downing spoke with The New York Times following the news of Aaron’s death, reflecting on their connection, Aaron’s legacy and the prejudice Aaron endured on his way to making history. 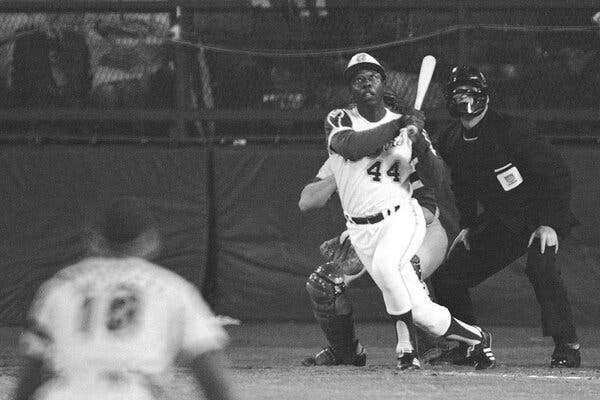 Downing said he had not given much thought to Aaron’s pursuit of Babe Ruth’s record in advance of the at-bat. “You’ve got a tied game, and next thing you know, somebody said: ‘Hey, Al, get off the mound, get off the mound! We’ve got a ceremony coming up!’”Credit…Harry Harris/Associated Press

What were your thoughts when you heard the news?

You’re connected to Aaron because you gave up his record-setting home run. You had to know that he was approaching Ruth’s record that day. Were you thinking about not being the guy to give it up, and what was going through your mind once you did?

No, I was thinking it was my first start of the ’74 season, and I was pitching in Atlanta. I wasn’t worried about giving up the home run.

When you’re in the midst of the battle, you worry about what’s going on. At that time, it was a 3-1 ballgame. Mr. Aaron hits the home run, and all of a sudden it’s a tied game, and you go, “Oh my god, there goes my lead.” You’ve got a tied game, and next thing you know, somebody said: “Hey, Al, get off the mound, get off the mound! We’ve got a ceremony coming up!” You don’t forget those moments. Mr. Aaron handled those moments with such dignity and such grace — couldn’t have been a nicer man. It couldn’t have happened to a nicer man, considering all he had to go through to get to that milestone.

He had a conversation with you the day after that home run. What did he tell you?

He said, “I know we didn’t get a chance to talk last night because it was so hectic here on the field.” He had told the bat boy to come over to our clubhouse and get me, and we met behind the cage on the field as he was getting ready to take batting practice. He told me: “Don’t keep your head down. Don’t feel sorry.” I said: “Mr. Aaron, I don’t have my head down. It’s a pleasure to play in the big leagues against you.”

Downing, who spent the first nine seasons of his career with the Yankees, appeared in an old-timers’ game at Yankee Stadium in 2019. He stayed in touch with Aaron over the years.Credit…Seth Wenig/Associated Press

There was a lot of hate directed toward Aaron. At the time, were you aware of the racist letters he was getting and the death threats against him?

No, no, he kept those private. But it was going on in our society. Remember what this world and what this country was like at that time. We were going through the whole civil rights era back in the ’60s, and it wasn’t over by ’74.

I was aware later, not at that time. Not before.

As a fellow Black ballplayer, what did his achievement mean to you?

It wasn’t so much as a Black man, but it was a guy proving that he could play the game of Major League Baseball no matter who he was. Remember, Roger Maris broke the record in ’61, and people questioned his ability. It was, “Oh, you weren’t good enough to break Babe Ruth’s record.” Come on, we’re all playing this major league game. But with Hank, it was a career record, and you look at it and you say, “Wow, boy, that’s a lot of at-bats and that’s a lot of home runs.” And that’s the one thing that stands out in your mind — that that’s a lot of dedication and perseverance.

What about Vin Scully’s call of the home run? He noted the significance, that “a Black man is getting a standing ovation in the Deep South.” Were you considering that context at the time?

What I heard from Scully was somebody replaying those quips, those sound bites. But he was absolutely right in what he was saying. It was unusual because you weren’t too far past the time when the races couldn’t mix on the athletic field. When I say we weren’t too far past, I’m talking about like ’68, ’69. That’s how recent. So all of a sudden, you looked in ’74 and you have this Black guy here in Atlanta, and you have all these white people in the stands standing up and clapping for him. It was totally unheard-of.

When you think about all that, how do you sum up Aaron’s legacy?

It shows you how great an impact not only sports, but also the sportsmen, the person carrying the message, can have on society and trying to bridge that gap that exists between cultures. He definitely personified that. He did it with such dignity, such grace, and it wasn’t like, “Oh, I showed you I could do this.” He showed ’em with his bat and with his legs and with his glove.

How did your relationship with him evolve in your retirements? How well did you guys get to know each other?

Do you have any favorite memories of Aaron?

Just the way he comported himself all the time without being overbearing.

At the reunion we had in ’84, we were sitting at the table at lunch and there were a bunch of writers there, and they were asking us questions. One writer decides he’s going to fire a couple digs at me. So he says, “Hey, Al, Henry really wore you out, didn’t he?” So Hank says: “Wait a minute. No, no, no. Al was a darn good pitcher. He was not a guy you took lightly when you went up there. You knew he was going to battle you. He was a great adversary.”

There’s an interview with Sandy Koufax in which he said he could never come up with a game plan against Aaron. Did you ever think you had one?

There was no book on Henry Aaron. He had the book on you. You pretty much went in there and said, “I hope my stuff is good enough tonight, because you’re going to need it.” He tested every pitch you had in every location. That’s how good a hitter he was.

There was no one way to pitch to him.

This interview has been edited for clarity and length.