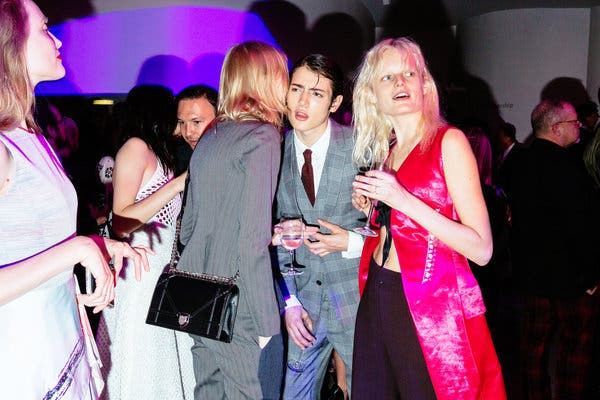 Harry Brant in 2015.Credit…Rebecca Smeyne for The New York Times

Harry Joseph Brant, a founding member of the next-generation jet set and a new-look “It” boy, was found dead on Sunday at age 24. The cause was an accidental drug overdose of prescription drugs, his family said. He had struggled with addiction for several years.

“We will forever be saddened that his life was cut short by this devastating disease,” his family said in a statement. “He achieved a lot in his 24 years, but we will never get the chance to see how much more Harry could have done.”

The younger son of Peter M. Brant, an industrialist, publisher and art collector, and Stephanie Seymour, one of the original supermodels, Mr. Brant grew up around the glitterati of the style and art worlds. He was a familiar presence at fashion shows and international parties at a young age, attending the Met Gala at age 16. Vanity Fair called him a “Little Lord Fauntleroy” for his unapologetic willingness to enjoy his own good fortune and looks, and New York Magazine once referred to Mr. Brant and his older brother, Peter Brant II, as “NYC’s Most Beautiful Teenage Brothers”; their social omnipresence seemed to invite a certain kind of hyperbole.

Peter, left, and Harry Brant at the Met Gala in 2013.Credit…Erin Baiano for The New York Times

Though he later grew to hate the Fauntleroy appellation, Mr. Brant was known for pushing the boundaries of gender stereotype in both cosmetics and clothing. He dabbled in journalism as a teenage columnist for his father’s Interview magazine, modeled for Balmain and Italian Vogue (among others), and, with his brother, founded a unisex makeup line with MAC, releasing collections in 2015 and 2016.

In 2016, Mr. Brant was arrested after refusing to pay a cab fare in Greenwich, Conn., and charged with larceny, interfering with an officer and drug possession. Though he attended Bard College, he did not graduate. According to his parents, he had been planning to enter a new drug rehabilitation center this year, and had hoped to return to play a larger role in the creative side of Interview magazine.

“Harry was not just our son,” the family said in the statement. “He was also a wonderful brother, loving grandson, favorite uncle and a caring friend. He was a creative, loving and powerful soul that brought light into so many people’s hearts. He was truly a beautiful person inside and out.”

In an interview with W magazine before one of the MAC kickoffs, Mr. Brant said, “I really think that once you leave high school, you realize that being normal is something that people want to shy away from, and the more true you are to yourself and the more individual you are, the more people are inherently attracted to you.” Makeup, he added, “is all about fantasy and turning yourself into someone you might not necessarily be on an everyday basis, so you kind of get to escape for a night with this new persona. That’s what I always did.”