When Jim Baumbach arrived in Cooperstown, N.Y., in the summer of 2007 to cover the inductions of Tony Gwynn and Cal Ripken Jr. into the Baseball Hall of Fame, the inescapable topic of the day was Barry Bonds, who was soon to become baseball’s career home run leader.

Baumbach, a reporter for Newsday, asked the assembled former players and other luminaries the obvious question: Should Bonds, perhaps the most visible symbol of the Steroid Era, be admitted to the Hall of Fame?

“So many of them squirmed, clearly hated talking about it,” Baumbach said in an email recently. Some said that they didn’t have a vote, which Baumbach thought was both a cop-out and a fair point. “Here I was asking them a question that I, the reporter, potentially had more power to decide.”

Players are elected to the Baseball Hall of Fame by the approximately 400 writers who have been members of the Baseball Writers Association of America for at least 10 years. When Baumbach became eligible to vote in 2014, he declined, thinking of that summer day in Cooperstown. A reporter should report the news, not make it, he thought.

A number of newspapers, including The Washington Post, The Los Angeles Times and The New York Times, bar their employees from participating in awards voting for a similar reason.

For many writers, voting is still an honor. But for others it has become a headache, reflecting their unease about enshrining players who cheated their way to greatness or behaved poorly — and sometimes criminally — off the field. In recent years, several prominent writers have opted out of the voting process or threatened to, raising questions about what it even means to be inducted.

“I think the discourse has gotten so toxic on so many things and this is just another one of them,” said C. Trent Rosecrans, a Cincinnati Reds beat writer for The Athletic and the president of the B.B.W.A.A.

The no-fun era kicked off in 2006, when Mark McGwire, the former slugger and a notorious steroid user, first appeared on the ballot.

One of the Hall of Fame’s voting rules states that a player’s character should be taken into account. That rule has existed since the 1940s, but for six decades there were essentially no players rejected because of character concerns, according to John Thorn, the official historian for Major League Baseball.

The character clause, as it has become known, gained relevance as steroid users, both admitted and suspected, began to appear on ballots. McGwire, Sammy Sosa and Rafael Palmeiro never made the Hall. Gary Sheffield and Manny Ramirez are still on the ballot but aren’t close to being voted in.

Barry Bonds and Roger Clemens were selected on 64 percent of ballots last year — 75 percent is the threshold to make it — and seem unlikely to get the necessary votes this year.

By 2014, the dissonance of the Steroid Era became too much for Dan Le Batard, the Miami Herald columnist and ESPN host. He turned his ballot over to the readers of Deadspin, allowing them to vote on whom he should include.

Le Batard decried the “avalanche of sanctimony” that “swallowed” the voting process and what he saw as the hypocrisy of writers declining to vote for Bonds when some of them surely would have taken a “not-tested-for-in-their-workplace elixir if it made them better at their jobs.” He knew he would be stripped of his ballot in the future (he was) but hoped his protest would lead to change.

“In a climate without reform, my next 20 years of votes will be counted but not actually heard,” he wrote. “At least this gets it heard, for better or for worse.”

The Baseball Hall of Fame still believes writers are “the best electorate for Major League players’ inclusion in the Hall of Fame,” according to a statement from its chairman, Jane Forbes Clark. She added: “We would hope that B.B.W.A.A. voters would share any of their serious concerns with their leadership so that they can be brought to, and fully addressed by, the Hall of Fame’s Board of Directors.”

But when the B.B.W.A.A. has brought concerns to the Hall, it has been ignored. Writers asked the Hall to change the rule that limited them to voting for a maximum of 10 players a year, as many felt there were more than 10 Hall of Fame-worthy candidates. They requested guidance for how to handle Steroid Era players and asked that the Hall make all ballots public after voting.

The Hall declined these requests, but did reduce the number of years a player could remain on the ballot, to 10 from 15. This was widely seen as an attempt to get players like Bonds off the ballot sooner.

All of this caused ESPN’s Buster Olney to stop voting in 2015. “The Hall of Fame seems to be hiding behind the writers — that’s how I felt at the time — in trying to squeeze out the Steroid Era players, and essentially letting the writers do their dirty work,” Olney said recently.

Baseball itself has seemingly forgiven these players. McGwire and Bonds, for instance, have both since gotten jobs as hitting coaches. Yet they remain on the outside of the Hall of Fame looking in. 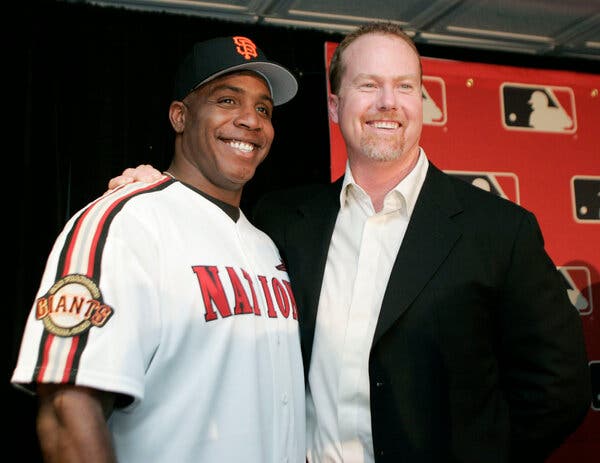 Former sluggers Barry Bonds and Mark McGwire are among the prominent Steroid Era players who have not been voted into the Hall of Fame. Credit…Rick Wilking/Reuters

Jeff Passan gave up his vote in 2017, after Hall of Famer Joe Morgan — a vice-chairman of the Hall who had long fought rear-guard actions against change in baseball — wrote a letter to voters urging them to keep steroid users out.

In a blistering column, Passan assailed the idea of anybody attaching special meaning to the Hall, as Morgan had. “If, by sacred place, the Hall means one in which racists, wife beaters, drunks, gamblers and purveyors of manifold moral turpitude otherwise are celebrated, well, Cooperstown is a shining beacon of divinity set upon a hill of hypocrisy.”

The latest abstainer is Tim Kawakami, the editor in chief of The Athletic’s San Francisco Bay Area site, who wrote that this year’s ballot will be his last. “For the first time since I got a ballot, I couldn’t figure out a reason to really keep doing it,” Kawakami wrote.

He might soon be joined by his colleague Ken Rosenthal, who wrote that he is “frustrated with the inconsistencies we cannot avoid, the false equivalencies we create, the rationalizations that require leaps in logic.”

Rosenthal declined to be interviewed for this story. As for whether he’ll give up his vote, he said only, “right now, I’m considering everything.”

His defection would be a serious blow. Rosenthal, Passan and Olney are among the best known and most influential modern baseball writers. If they all decided they wanted nothing to do with voting, the sustainability of the process would be ever more in question.

Rosenthal’s column also demonstrated that some voters were taking a more expansive view of the character clause. Besides steroids users, Rosenthal had voted for players who were accused of domestic violence or arrested on suspicion of drunken driving. One player had an inappropriate relationship with an underage girl, and one repeatedly made transphobic comments.

If character counts, Rosenthal asked, aren’t those transgressions much better reasons to keep somebody out of the Hall of Fame than their steroid use? This evolved understanding already seems to be affecting the vote. For instance, it seems clear that Curt Schilling’s baseball résumé would have ensured his induction if not for his repeated offensive comments.

This year’s vote comes at a time of a national reckoning with racism, one that has not spared baseball or its writers. The B.B.W.A.A. recently removed the name of the former commissioner Kenesaw Mountain Landis from its Most Valuable Player Award because of his segregationist and racist views.

In a strange wrinkle of history, it was Landis who was most responsible for the adoption of the character clause. But rather than invoking character to exclude players, Landis wanted writers to enshrine players who wouldn’t have qualified on their baseball performance alone. He championed Eddie Grant, a light-hitting and unremarkable infielder who was killed while fighting in World War I. The writers declined to vote him in, but shortly after Landis died in 1944 the Hall of Fame officially made character a consideration in the voting process for induction.

Some of the thorniest cases will soon resolve themselves. Bonds, Clemens, Sosa and Schilling have all been on the ballot for nine years, meaning that unless they make it in this year, next year will be their last year of eligibility.

But the writers will get no reprieve. Questions about how the character clause should be wielded are not settled, nor will there be a shortage of players who some voters believe violated it. Absent guidance from Major League Baseball or a wholesale change in how voting is conducted, consternation will remain.

And the Steroid Era? The reckoning is not over, not by a long shot. Alex Rodriguez will be eligible for election into the Hall of Fame in 2022.