The Baseball Hall of Fame voters pitched a shutout on Tuesday, rejecting all 25 candidates for enshrinement in Cooperstown, N.Y. But some of the players they passed over should not despair.

Candidates need to receive a minimum 75 percent of the vote to be elected, and many build support over time. The last time the writers elected nobody was in 2013, and seven of the top 10 finishers eventually earned plaques. The exceptions that year will sound familiar: Barry Bonds, Roger Clemens and Curt Schilling.

That group has lingered on the ballot for nine years. Voters have 10 years to consider candidates, meaning that the next election, in December, will be the writers’ final referendum on three of the most dominant and polarizing players in baseball history. Another, Alex Rodriguez, will appear on the ballot for the first time.

Schilling, a postseason pitching titan whose incendiary rhetoric on social media has caused some voters to rethink their support, though he improved to 71.1 percent, from 70 percent last year. Schilling collected 285 voters among the 401 ballots cast by 10-year members of the Baseball Writers’ Association of America.

Bonds and Clemens, who are linked by extraordinary success on the field and strong ties to performance-enhancing drug use, fell short again — Bonds with 61.8 percent of the vote, Clemens with 61.6 percent. Bonds, a seven-time winner of the National League Most Valuable Player Award, is the career home run leader, with 762. Clemens, a seven-time winner of the Cy Young Award, is the only pitcher in history with 350 victories and 4,000 strikeouts. 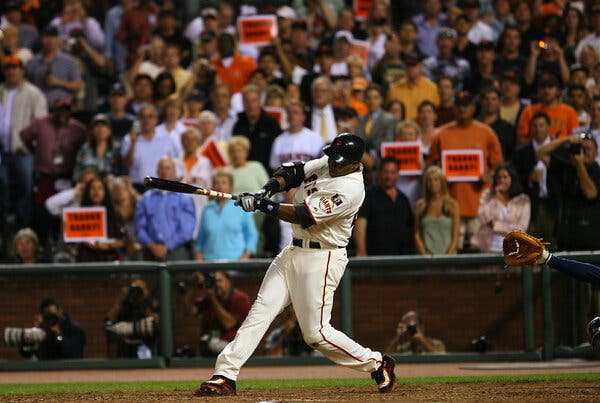 Barry Bonds played his last game for the San Francisco Giants in 2007. He is the career leader in home runs with 762.Credit…Jim Wilson/The New York Times

If the writers do not elect Bonds, Clemens or Schilling on the next ballot, their fate will fall to a 16-person panel of Hall of Famers, team officials and historians. Formerly known as the veterans’ committee, this group considers managers, umpires, executives and players not elected by the writers, covering a different era in each election.

That group did not meet last December because of the coronavirus pandemic, so officially, the 2021 class will have no members at all. But because the pandemic also canceled the induction ceremonies for the 2020 class — including Derek Jeter, Larry Walker, Ted Simmons and Marvin Miller — there should still be activity in Cooperstown this summer. The Hall of Fame has scheduled an induction ceremony for July 25.

The writers have voted for the Hall of Fame since its founding in 1936. This was the ninth time they have held an election and failed to induct anyone. But in each of those empty elections, at least six of the top 10 finishers were inducted in time. Other than Gil Hodges, every player who has received at least 50 percent on a writer’s ballot has eventually been elected by the writers or a subsequent committee.

The New York Times is one of several news organizations that forbids writers from voting for awards, believing that reporters should not be newsmakers. But if I could have submitted a ballot, I would have checked boxes for Bonds, Clemens, Todd Helton, Jeff Kent, Scott Rolen, Schilling and Gary Sheffield.

To me, the character clause should only apply if a player was, at some point, forbidden from participating because of cheating. If not, his career was fully sanctioned by Major League Baseball, and that’s good enough for me. Bonds and Clemens belong.

Roger Clemens won seven Cy Young Awards. He is the only player with 350 wins and 4,000 strikeouts.Credit…Barton Silverman/The New York Times

As for Schilling, his work on the field was Cooperstown-worthy (he is the only pitcher with more than 3,000 strikeouts and fewer than 750 walks) and for all of his troubling social-media bluster in retirement, he was honored several times as a player for community service and character. This is a baseball election, not a congressional race, and Schilling was great at baseball.

Yet the defining image for Sosa, historically, is his chase for the single-season home run record with Mark McGwire in 1998. McGwire never came close to election, and it would seem incongruous to put Sosa’s plaque in a gallery that does not include McGwire’s.

Likewise, as wondrous as Andruw Jones was in center field, how could he be in the Hall of Fame if Dale Murphy is not? Like Jones, Murphy was a Braves center fielder with a dominant nine-year stretch. Both players have a crowded trophy case — Jones won one Silver Slugger and 10 Gold Gloves, while Murphy earned four Silver Sluggers, five Gold Gloves and two Most Valuable Player Awards.

Andruw Jones was a terrific center fielder for Atlanta. His similarities to Dale Murphy work against him in Hall of Fame voting.Credit…Jamie Squire/Getty Images

Both players declined sharply in their 30s, and their statistics are so similar that Baseball Reference lists Murphy as the closest comparable player in history to Jones, and vice versa. As the old song says, you can’t have one without the other.

Omar Vizquel won even more Gold Gloves than Jones (11), and nobody ever played more games at shortstop. But in a 24-year career, Vizquel was named on an M.V.P. ballot just once — a 16th place finish in 1999. While M.V.P. voting is imperfect, to be sure, a Hall of Famer should at least have some periods of dominance.

Then again, Billy Wagner was dominant. No pitcher in history with at least 900 innings can match him for strikeouts per nine inning: 11.9. He is sixth on the career list for saves, with 422, and retired at the top of his game in 2010.

Wagner’s 903 innings would be the fewest in Cooperstown, but he worked in nearly 200 more games than the Hall of Fame closer Bruce Sutter, who often logged multiple innings. Sutter had a famous pitch — the split-finger fastball — and Wagner had perhaps the best fastball of his era.

The critical difference is the playoffs, where Wagner had a 10.03 earned run average in 14 games. Sutter was a force in his lone postseason, 1982, helping the Cardinals to a title with a victory and a Game 7 save in the World Series.