PARIS — Six nongovernmental organizations put the French state on notice on Wednesday to force it to address “systemic discriminatory practices by the police,” a rare collective legal action that will take the government onto uncharted grounds.

The organizations, including Human Rights Watch and Amnesty International, accused the French government of neglecting its duty to end discriminatory police identity checks — a practice they said was “widespread, deeply rooted in the policing.”

They also called on the authorities to bring in “structural reforms and to take concrete measures to stop these practices,” a statement read.

It is the first time such a collective action is targeting the French state in relation to policing since its introduction as a legal device in the country in 2014.

The move is likely to stir an already tense debate on police brutality and racism in France. It comes after a year of controversies over deadly or brutal police interventions, widespread protests against police racism and strong opposition to a contentious security bill.

President Emmanuel Macron, in an interview with the online news outlet Brut in December, acknowledged that “today, when your skin color is not white, you’re checked more often.” He also said the government would open an online platform to consult citizens on discrimination issues.

Despite several independent reports and a series of recent scandals exposing discriminatory police practices, French police officers have rarely been punished for racist abuses — only nine times from 2009 to 2018, according to the French daily Libération. 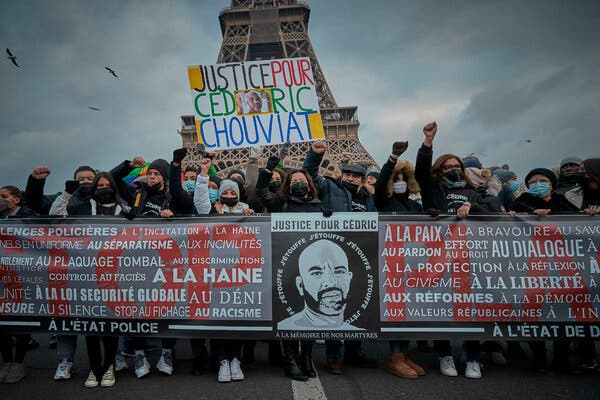 A rally in Paris on the anniversary of the death of Cedric Chouviat, a delivery driver of Algerian descent who died after police officers pinned him down during a traffic stop.Credit…Kiran Ridley/Getty Images

In keeping with French procedures, the nongovernmental groups, representing dozens of plaintiffs, first sent a formal notice asking the prime minister, and the interior and justice ministers, to address the issue of discriminatory practices by the police within four months. If the government does not take satisfactory action by then, the organizations may file a class-action lawsuit.

Changes requested by the organizations include amending the French code of criminal procedure to explicitly prohibit discriminatory identity checks, introducing specific rules for checking minors and creating a comprehensive database on identity checks.

It is difficult to get a precise measure of racial profiling by the police because ethnic statistics are tightly regulated in France. But a 2017 investigation by the state civil liberties guardian found that “young men perceived to be Black or Arab” were 20 times as likely to be subjected to police identity checks than the rest of the population.

Several studies from nongovernmental organizations, including a Human Rights Watch report released last June, also pointed to systemic discrimination by the police. In 2016, France’s Supreme Court of Appeals ruled that police identity checks of several young men because of their “real or supposed origin” constituted “a serious misconduct involving the responsibility of the state.”

Police officials and unions have long ignored these reports, and various French governments have balked at pushing for police overhauls. Gérald Darmanin, the interior minister, has insisted that instances of police racism were the work of “individuals” rather than a systemic issue.

But even members of the police force have started to sound the alarm.

“It’s a fact — there is racism in the police,” said Noam Anouar, an officer turned whistle-blower who in 2017 revealed racist messages sent by his superiors. He accused the police authorities of regularly finding ways to retrospectively justify practices that could be considered discriminatory.

By driving the government into a judicial corner, the organizations’ collective action aims to end these practices.

Slim Ben Achour, one of the lawyers representing the groups, said the move “confronts the state with its responsibilities,” about what he called its passiveness in addressing the issue.

Mr. Ben Achour said the move had been inspired by several class actions in the United States, such as Floyd v. City of New York, which in 2013 resulted in a significant decrease in stop-and-frisk police practices.

But unlike the lawsuits in the United States that have targeted local police forces, Wednesday’s move involves France’s national police force and could lead to changes that affect a wide range of officers.

“We have the opportunity to change the lives of people all over the country,” Mr. Ben Achour said.

The issue of police racism, which has recently surfaced in other parts of Europe too, has particularly resonated in France, which has large African and Arab populations from its former colonies that it has failed to fully integrate. After the police killing of George Floyd in Minneapolis last May, tens of thousands of people gathered in Paris to protest police violence.

The police beating last December of a Black music producer, Michel Zecler, also forced a reckoning within the French government. After officers beat Mr. Zecler, Mr. Macron said in a letter to a police union that there was “an urgent need” to overhaul the security forces and called for a conference to review the working conditions of the police force and its relations with the French public.

The conference — which brings together representatives of the police forces, elected officials and citizens — started on Monday and is expected to last until the end of May.