DEPOK, Indonesia — The mother didn’t stop crying from the moment she arrived at the cemetery. In disbelief, she repeatedly clutched and kissed the wooden grave marker bearing the name of her daughter, Isti Yudha Prastika.

“Mama waits for you every day,” she sobbed. “Why don’t you return home?”

Ms. Isti, 34, was an off-duty flight attendant with NAM Air, and one of 62 people aboard Sriwijaya Air Flight 182 when it hurtled into Indonesia’s Java Sea minutes after takeoff from Jakarta’s Soekarno-Hatta International Airport on Jan. 9.

The authorities continue to piece together what happened to the 26-year-old Boeing 737-500. Answers could take months as investigators comb through the evidence of the latest aviation disaster in a country plagued with perilous skies.

For the families of the victims, the grief has been sharp and sudden. Closure will be slow as the answers trickle in, and worsened for many by the lack of a body or other remnants with which to say goodbye.

In its brief, final descent into the sea, the airliner plunged nearly 11,000 feet in 14 seconds. It struck the water with such force that searchers say finding remains is difficult. Ms. Isti was buried on Saturday in a closed coffin, rather than the traditional shroud, because searchers have recovered only partial remains of her body.

“All the bodies are in pieces, which is challenging for the recovery because they are buried in the mud and under the wreckage,” said Muhammad Yusuf Latif, a spokesman for Indonesia’s search and rescue agency. Search teams have brought ashore 313 body fragments so far. Forty people haveso far been identified through fingerprints and DNA.

Divers continue to search for the memory unit of the plane’s cockpit voice recorder, which broke apart on impact. The device’s plastic casing, battery and acoustic signal beacon were all recovered separately. The plane’s other so-called black box — the flight data recorder — was recovered intact last week. 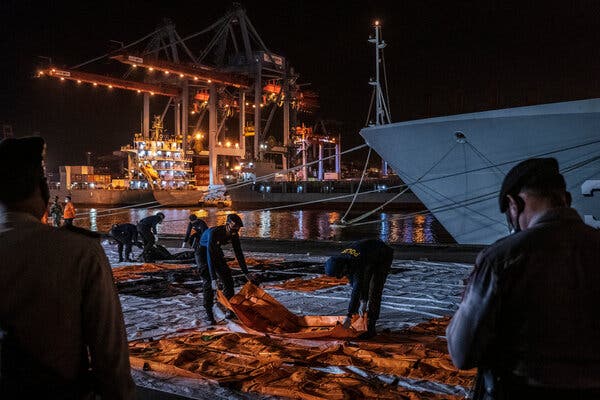 Like many aboard the flight, Ms. Isti ended up on the aircraft because of a sudden change in plans. In Ms. Isti’s case, her airline abruptly moved up her departure date so she could work on a different flight the following day, her family said.

Some travelers rearranged their schedules around thechanging governmental Covid-19 test requirements, only to have their flights canceled and end up on the doomed Boeing 737.

The plane was bound for the city of Pontianak on the island of Borneo, but was delayed because of heavy rain. The trip was scheduled to take about 90 minutes. It included a crew of six as well as six off-duty crew members from NAM Air, Sriwijaya’s sister airline.

Of the 50 other passengers, 10 were children, including three infants.

Among those on board were three generations of a family traveling together: grandparents Toni Ismail and Rahmawati, both 59; their daughter, Ratih Windania, 32, who was five months pregnant; her daughter Yumna Fanisyatuzahra, 3; and Ms. Ratih’s nephew, Athar Rizki Riawan, 8.

Divers searching the wreckage found a small, pink, Minnie Mouse sweatshirt that matched one belonging to Yumna, but her remains have yet to be identified.

The family had flown to Jakarta from Pontianak for a holiday with relatives. Athar’s family had sent the boy ahead with his relatives and planned to join them on the holiday later, said his father, Iwan Kurniawan.

Yudi Qurbani displays a photo of his family members killed in the crash.Credit…Ulet Ifansasti for The New York Times

He described Athar as an exceptional boy who was mature for his years, devoted to his prayers and loved to entertain everyone with jokes and songs.

“Athar is beloved by the whole big family,” he said. “Families from my side, families from my wife’s side. He was the idol of the big family. Even the people around our housing complex. This kid was special. The whole family feels lost now.”

The family had booked an early morning flight on NAM Air to return to Pontianak on Jan. 9. But the night before, they received a text message saying they were to take the Sriwijaya flight instead. It was unclear why the flight was canceled, but it is not uncommon for affiliated airlines to consolidate flights. A spokeswoman for NAM Air declined to comment.

On Saturday, the family was notified that two of the victims, Mr. Toni and Ms. Rahmawati, had been identified and relatives were asked to come to the Kramat Jati National Police Hospital in East Jakarta, where forensic experts are working to identify remains recovered from the crash. Officials said the family would be given closed coffins.

“We haven’t been told what remains were recovered,” said Yudi Qurbani, a cousin who helped represent the family at the hospital.

The wife of a flight attendant killed in the crash mourns over his coffin. Traditionally, Muslims are buried in shrouds, but the victims’ remains were too small for the custom. Credit…Ulet Ifansasti for The New York Times

Another multigenerational family of five was on the Sriwijaya flight.

Mr. Rizki, who worked as a forest ranger at Mount Palung National Park in West Kalimantan Province on Borneo, had not seen his wife since the birth of their son. The family was traveling from a reunion on Bangka island to Pontianak. When their coronavirus test results came in earlier than expected, they made a last-minute decision to take the Sriwijaya flight.

“We are all at a loss with their passing,” said Sri Rahayu, Mr. Rizki’s cousin. “This is really painful. It is still hard to believe, even now, that they are gone.”

The flight data recorder was displayed by safety investigators in Jakarta, last week.Credit…Ulet Ifansasti for The New York Times

On Saturday, about 100 mourners came to the funeral of Ms. Isti, the flight attendant, who was one of the first victims to be identified and buried.

Family members in the Muslim-majority country were not allowed to see the remains that were recovered and were given a closed coffin, depriving them of the Islamic ritual of washing the body. (Normally Muslims are buried in a shroud, not a coffin.)

Ms. Isti had worked for 15 years for various airlines, including an eight-year stint with Sriwijaya Air early in her career.

“Isti was a funny person,” said her brother, Billian Purnama Oktora, an architect. “She never got mad. She liked to make jokes. She was kind. And she was a role model for her nieces and nephews.” Her mother, Iriyaningsih, was still shocked by the loss.

In some cases, families are still clinging to hope that remains will be recovered.

Panca Widia Nursanti, a vocational high school teacher who lived in Pontianak with her family, went on her own for a holiday in Central Java in December, traveling by way of Jakarta. Normally, it was a family holiday, but her husband and children decided to stay home.

She had planned to return on Jan. 2, but delayed her departure after the provincial government announced new coronavirus test requirements for airline travel. She booked the early morning NAM Air flight on Jan. 9.

After getting her negative test result, she arrived at the Jakarta airport at dawn to check in, only to be told that her flight had been changed to the afternoon Sriwijaya flight.

Her remains had not been identified as of Tuesday.

“She was a very sociable person, warm, friendly,” said Mizar Arani, a cousin. “She was loved by her students. She was such a dedicated person, to her family, to her students. All of us are feeling lost now. We lost one of the best people, a role model for the community and her students.”

Parts of a plane recovered from the waters off Java Island where Sriwijaya Air Flight 182 crashed.Credit…Ulet Ifansasti for The New York Times
Related Topics:HadJakartaNotSheWho