BRUSSELS — When members of the European Parliament sat down this month to read the first publicly available contract for purchasing coronavirus vaccines, they noticed something missing. Actually, a lot missing.

And that contract, between the German pharmaceutical company CureVac and the European Union, is considered one of the world’s most transparent.

Governments have poured billions of dollars into helping drug companies develop vaccines and are spending billions more to buy doses. But the details of those deals largely remain secret, with governments and public health organizations acquiescing to drug company demands for secrecy.

Just weeks into the vaccination campaign, that secrecy is already making accountability difficult. The drug companies Pfizer and AstraZeneca recently announced that they would miss their European delivery targets, causing widespread concern as dangerous virus variants spread. But the terms of their contracts remain closely guarded secrets, making it difficult to question company or government officials about either blame or recourse.

Available documents, however suggest that drug companies demanded, and received, flexible delivery schedules, patent protection and immunity from liability if anything goes wrong. In some instances, countries are prohibited from donating or reselling doses, a ban that could hamper efforts to get vaccines to poor countries.

Governments are cutting at least three types of vaccine deals: Some are buying directly from pharmaceutical companies. Others are buying through regional bodies like the European Union or the African Union. Many will turn to the nonprofit Covax program, an alliance of more than 190 countries, which is buying from the drug makers with an eye toward making vaccines available worldwide, especially to poor countries free or at reduced cost. Some governments have signed deals with manufacturers and Covax alike.

The United States has secured 400 million doses of the Pfizer-BioNTech and Moderna vaccines, enough for 200 million people, and is close to arranging 200 million additional doses by summer, with options to buy up to 500 million more. It also has advance purchase agreements for more than 1 billion doses from four other companies whose inoculations do not yet have U.S. regulatory approval.

The European Commission, the European Union’s executive branch negotiating on behalf of its 27 member states, has nearly 2.3 billion doses under contract and is negotiating for about 300 million more, according to data collected by UNICEF and Airfinity, a science analytics company.

Covax says it has agreements for just over 2 billion vaccine doses although it, too, is keeping its contracts secret. Only about a dozen of the 92 countries that qualify for vaccine subsidies under the alliance have managed to secure separate deals with individual companies, for a combined 500 million doses.

Despite the secrecy, government and regulatory documents, public statements, interviews and the occasional slip-up have revealed some key details about the vaccine deals. Here is what we learned. 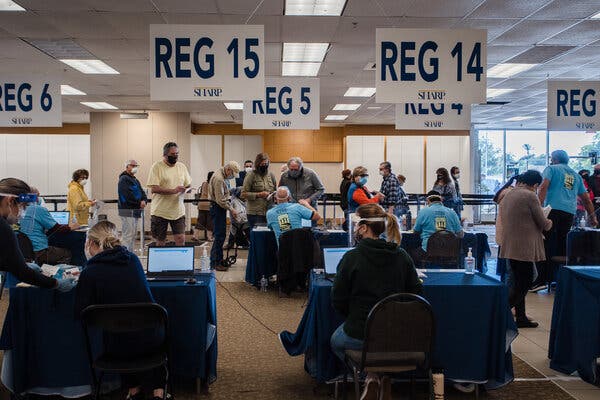 Waiting in line to receive Moderna’s vaccine in San Diego. The company said its vaccination program was fully funded by the federal government.Credit…Ariana Drehsler for The New York Times

Vaccine development is a risky venture. Companies rarely invest in manufacturing until they’re sure their vaccines are effective and can win government approval. That’s part of why it typically takes so long to develop and roll them out.

To speed up that process, governments — primarily the United States and Europe — and nonprofit groups like the Coalition for Epidemic Preparedness Innovations, or CEPI, absorbed some or all of that risk.

The United States, for example, committed up to $1.6 billion to help the Maryland-based company Novavax develop its coronavirus vaccine, according to regulatory filings. CEPI kicked in up to about $400 million in grants and no-interest loans.

Other companies have received even more help. The Massachusetts biotech company Moderna not only used government-developed technology as the foundation of its vaccine, it also received about $1 billion in government grants to develop the drug. In August, the government then placed an initial order for the vaccine for $1.5 billion. The company has said that the project was paid for entirely by the federal government.

These types of arrangements were designed to help companies jump-start manufacturing and cover costs such as clinical testing.

But Companies Keep the Patents

Despite the tremendous taxpayer investments, typically the drug companies fully own the patents. That means that companies can decide how and where the vaccines get manufactured and how much they cost. As the CureVac contract explains it, the company “shall be entitled to exclusively exploit any such” property rights.

This has been a matter of contention for months. A coalition of countries, led by India and South Africa, have petitioned the World Trade Organization to waive intellectual property rights so generic drug makers can begin producing the vaccines. The World Health Organization has endorsed the idea, but it is all but doomed by opposition from the United States and Europe, whose drug makers say patents, and the profits that flow from them, are the lifeblood of innovation.

“Governments are creating artificial scarcity,” said Zain Rizvi of the watchdog group Public Citizen. “When the public funds knowledge that is required to end a pandemic, it shouldn’t be kept a secret.”

Administering the Pfizer-BioNTech vaccine in France earlier this month. The European Union is paying much less than the United States for each dose of the shot.Credit…Andrea Mantovani for The New York Times

One of the key terms of the vaccine contracts — the price per dose — is frequently redacted in the public versions of government contracts. The companies consider this a trade secret. Some drug companies have included clauses in their supply contracts that allow them to suspend deliveries if countries reveal the price.

By insisting that their pricing remains confidential, the drug makers have the upper hand over government negotiators who do not know what others countries are paying.

While governments accepted that provision, leaks and some official reports show some of the disparities. The European Commission paid $2.19 for every dose of the vaccine developed by the University of Oxford and AstraZeneca, while South Africa paid more than twice as much, $5.25, according to media reports.

Drug companies did not respond to requests to view their unredacted contracts or explain why secrecy was necessary. A spokeswoman for Moderna pointed only to a regulatory document that said the contract “contains terms and conditions that are customary.”

That is why it caused such a stir last month when a Belgian official mistakenly revealed a price list, which showed that United States taxpayers were paying $19.50 per dose for the Pfizer vaccine, while Europeans paid $14.70.

Dag Inge Ulstein, Norway’s minister of international development, said countries and international organizations must do more to make contracts public. He also called on countries to share vaccine technology and said rich governments should donate vaccines to poor countries early — even while still vaccinating their own citizens, as Norway plans to do.

“There must be transparency related to the agreements on procurements,” he said in an interview. To that end, he shared with The New York Times his country’s purchase agreement with Covax. That organization has refused to make public its deals — either with the drug makers or with the countries it is selling to.

Covax contracts with countries assume a cost of $10.55 per dose but warn that the final cost could be higher after including an “access/speed premium,” which Covax said is used to help companies rush their vaccines to market.

Donations and Resales Are Restricted

Public health advocates have called on wealthy countries — which have all but cornered the market on the early doses — to donate or sell vaccines to poor countries. But contracts may restrict buyers’ ability to export doses, which could depress drug company sales.

The CureVac contract, for example, prohibits European countries from reselling, exporting or donating doses — including to Covax — without permission from the company. Some contracts in the United States have similar restrictions.

A spokesman for the European Commission has said the companies included that provision to guarantee that, wherever their drugs were used, they were covered by the same legal protections.

And governments are trying to find other ways to restrict exports.

On Tuesday, Germany lobbied the European Commission to allow its member states to block exports of vaccines to countries outside of the bloc after the stuttering start of vaccine distribution in Europe.

Packing boxes of Covishield, the AstraZeneca-Oxford vaccine, at an assembly line in Pune, India.Credit…Atul Loke for The New York Times

Vaccines Arrive When They Arrive

Delivery times are considered proprietary information, so there are no public benchmarks to measure a company against.

Nowhere is that clearer than in the European Union’s fight with AstraZeneca over the company’s announcement that it would not deliver the expected number of doses in the first quarter of this year. European officials say they received specific, contractual assurances for such deliveries. The company says it promised only to make its best efforts to hit those targets.

European officials, who initially agreed to keep the contract secret, have now asked the company to make it public. Unless that happens, there’s no way to assess who is responsible.

But there is no question that the drug makers have built themselves plenty of wiggle room for such an ambitious, complicated rollout. The CureVac contract says that the delivery dates (which are all redacted) should be considered estimates. “No product or only reduced volumes of the product may be available at the estimated delivery dates,” the contract reads. Similar provisions exist in other contracts.

Nearly every vaccine maker has similarly told investors that they might not hit their targets. “We may not be able to create or scale up manufacturing capacity on a timely basis,” Pfizer warned in a corporate filing last August.

That uncertainty has frustrated health officials. When Pfizer recently told Italy that it was temporarily cutting deliveries by 29 percent, the government said it was considering taking the company to court. That lawsuit, if it materializes, could make public some details of the European Union’s contract with Pfizer, which remains entirely secret.

“At one point they promised more vaccines or faster vaccines,” said Steven Van Gucht, the Belgian government’s top virologist. “And in the end they couldn’t deliver.”

Some Governments Are Profiting

Early in the pandemic, the European Investment Bank, the lending arm of the European Union, provided a $100 million loan to the German company BioNTech, which partnered with Pfizer in producing a vaccine.

In addition to the interest on the loan, the European bank will receive up to $25 million in vaccine profits, according to a redacted version of the contract that BioNTech filed with securities regulators.

The bank said profit-sharing arrangements reflect the risk involved in early financing. Mr. Rizvi, of Public Citizen, argued that it puts governments on the same side as the drug makers and reduces any incentive to make drugs cheap and widely available.

Patients sitting in a waiting area after being vaccinated in Berlin last month.Credit…Lena Mucha for The New York Times

In the United States, drug companies are shielded from nearly all liability if their vaccines don’t work or cause serious side effects. The government covered Covid-19 drug makers under the PREP Act, a 2005 law intended to speed up access to medicine during health emergencies.

That means that people cannot sue the companies, even in cases of negligence or recklessness. The only exceptions are cases of proven, “willful misconduct.”

Drug companies are seeking similar liability waivers in negotiations with other countries. European negotiators have balked at such requests. Covax also insists that countries accept all liability as part of its contracts.

The CureVac-E.U. contract does shield the company from significant liability, but with exceptions. Those exceptions are redacted.