Teddy Johnson has a very clear fantasy for what he’s going to do the day the pandemic is “over” — whatever that day might look like, and whenever it may be.

He’s banking on the day being sunny, perhaps the temperature of early summer. “I Wanna Dance With Somebody (Who Loves Me)” by Whitney Houston will be playing everywhere — on the streets of New York City, where he lives; on the subway; and definitely in the club where Mr. Johnson will gather with all his friends. He will wear a cropped white tank top with speckles of paint all over it with his favorite pair of tight bell-bottoms and stunner sunglasses.

“I can’t wait to dance with my friends,” said Mr. Johnson, 28, over the phone from his apartment in Manhattan. It won’t erase the pain of last year, which was compounded for Mr. Johnson by the loss of his job, but the dance floor fantasy is soothing — something to look forward to. “Dancing is as important to me as water,” he said. “Thinking about getting on a dance floor with the people I love is getting me through this stay-at-home life.”

Mr. Johnson’s fantasy may seem premature — most of us won’t be rushing back to a crowded dance floor, no matter how much we miss it — but experts say that fantasizing, forward thinking and using one’s imagination are powerful tools for getting people through difficult times.

With the winter’s end nowhere in sight, with coronavirus cases and deaths still high (and a new variant at large that’s more transmissible), and with the Capitol breached and American democracy seemingly hanging in the balance, people have a need to look ahead to the parties they’ll host, the hugs they’ll give and receive, the conversations they’ll have and the trips they’ll take, once it’s safe.

“The important thing about imagination is that it gives you optimism,” said Martin Seligman, a professor of psychology at the University of Pennsylvania and the director of the Positive Psychology Center there

His work is dedicated to studying human agency, which is predicated on efficacy, optimism and imagination. (When Dr. Seligman was president of the American Psychological Association in 1998, he pushed for moving away “from focusing on what’s wrong to what makes life worth living.”)

The hours spent fantasizing and daydreaming about future plans are valuable, Dr. Seligman said. They allow people to escape routine, and cultivate hope and resilience. Imagination also helps people live a “good life,” which Dr. Seligman has found is greatly influenced by positive thinking, emotion, engagement, relationships, meaning and accomplishments — or what he calls PERMA.

“Imagining the future — we call this skill prospection — and prospection is subserved by a set of brain circuits that juxtapose time and space and get you imagining things well and beyond the here and now,” Dr. Seligman said. “The essence of resilience about the future is: How good a prospector are you?”

And that’s the case regardless of whether one’s imaginings of the future are over-the-top and unbelievable, or seemingly mundane.

Gabriela Aguilar, 27, a mother of two who runs an Etsy shop of homemade goods, said the thing she is looking forward to the most is taking her children to a playground. The Zilker Park playground in Austin, Texas, is her ultimate fantasy.

Ms. Aguilar’s family moved from Houston to Austin in 2020, and her children have not been able to play with other children since they got there. “I feel bad when we go on walks and I see other kids” Ms. Aguilar said. “They want to play and have fun and just be kids, but there’s this awkwardness of us pulling our kids apart and not letting that happen.” 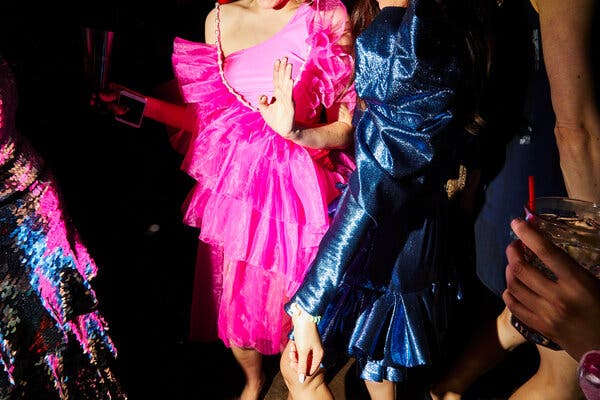 Oh, to dance in the same space!Credit…Amy Lombard for The New York Times

Rachel Syme, who writes about fashion, style and culture for The New Yorker said that she and her friend Avery Trufelman, who hosts The Cut podcast, have been talking about throwing a party once it’s safe to do so. The party will be called The After Party.

“We can wear the outfits we did not get to this year — no outfit too over the top, no rules,” she said in an email sent in December. “Come in a velvet suit, come in a leotard, come in a ball gown. NO RULES.”

Imani Baucom, 29, a teacher in Washington, D.C., has been fantasizing about taking a trip to the Dominican Republic to see a class of fifth graders she taught some seven years ago. They’ll be graduating from high school this spring.

Outsize fantasies like these are, at their root, similar to simpler ones — a date, a cocktail, the ability to eavesdrop again — in that they are all expressions of an intense human need to connect.

“They are fantasizing about what they’re missing right now,” said Deirdre Barrett, a psychologist who teaches at Harvard Medical School. “These daydreams serve as a substitute, which gives them some of the pleasure the real experience would.”

Hold On to Hope

At a time in which many people have lost loved ones, or are struggling to pay their bills, feed their families and hold on to their homes, fantasizing about better times is not necessarily a given.

“We forget that imagination isn’t just about the positive,” said Peg O’Connor, a professor of ethics at Gustavus Adolphus College in Minnesota. “To always think of imagination as a good thing is a danger. A lot of people can’t imagine good, joyful hopeful things because they are not able to or their lives have had so much difficulty that it feels foolhardy to.”

This was echoed by Dr. April Toure, a psychiatrist who specializes in working with children and adolescents at Maimonides Medical Center in Brooklyn.

“Even though it’s not considered a core symptom of depression, the absence of hope is a common symptom,” said Dr. Toure. Future thinking, or “the imagination and belief that something better is coming,” is crucial to getting through hard times.

Holding on to hope, even about one simple, mundane thing can make a big difference, Dr. O’Connor said. “I’m not day dreaming of big trips,” she said. “I can’t wait to hug my mom.”