But their proposal met a tepid reception from Democrats, who are preparing this week to move forward with their own sweeping package — even if it means eventually cutting Republicans out of the process. Haunted by what they see as their miscalculations in 2009, the last time they controlled the government and faced an economic crisis, the White House and top Democrats are determined to move quickly this time on their stimulus plan, and reluctant to pare it back or make significant changes that would dilute it with no certainty of bringing Republicans on board.

“The dangers of undershooting our response are far greater than overshooting,” said Senator Chuck Schumer, Democrat of New York and the new majority leader. “We should have learned the lesson of 2008 and 2009, when Congress was too timid and constrained in its response to the financial crisis.”

Their strategy can be traced to 12 years ago, when Barack Obama became president, Democrats controlled both houses of Congress, and they tackled both an economic rescue package and a sweeping health care overhaul.

In retrospect, in the quest to win Republican backing for both, Democrats say, they settled for too small an economic stimulus and extended talks on the health care measure for too long.

That view was driving the party’s unenthusiastic response on Sunday to the new offer from the Senate Republicans who asked for a meeting with Mr. Biden to lay out a substantially smaller stimulus proposal. In a letter, the 10 senators — notably enough to defeat a filibuster — said their priorities aligned with Mr. Biden’s on crucial areas such as vaccine distribution.

But members of the group made clear in interviews on Sunday that their plan amounted to less than a third of Mr. Biden’s proposal. Democrats said they would review it, but would insist on a comprehensive legislative response.

While talks with Republicans are expected to continue, Democrats are set this week to put in motion a budget process known as reconciliation that is not subject to a filibuster, allowing them to push through pandemic legislation on their own if no bipartisan agreement emerges.

That possibility has Republicans squawking that Democrats are abandoning their bipartisan pledge without giving it a chance and warning that the effort will poison their ability to reach bipartisan deals. The objection ignores the fact that when they controlled Congress, Republicans rolled over Democrats in January 2017 and began their own reconciliation process even before Donald J. Trump was sworn in as president, paving the way for the enactment of a $1.5 trillion tax package that was muscled through without a single Democratic vote.

“We’re giving an opportunity to come together on important and timely legislation, so why wouldn’t you do that rather than trying to move it through with reconciliation and having a fully partisan product?” asked Senator Lisa Murkowski, Republican of Alaska and one of the signers of the new letter.

While they have yet to roll out their plan, members of the group said it would omit Democrats’ proposal for a federal minimum wage increase and scale back direct stimulus payments to individuals, excluding Americans earning more than $50,000 a year or families with a combined income exceeding $100,000.

“Let’s focus on those who are struggling,” Senator Rob Portman, Republican of Ohio, said on the CNN program “State of the Union” on Sunday.

But to Democrats, the scars from 2009 cut deep. First, they believe they were too accommodating to Republicans, who called for restraint in providing stimulus for the economy. Then Democrats saw themselves as sandbagged by Republicans who engaged in prolonged negotiations over health care before pulling the plug entirely, opposing legislation that they had helped draft and inflaming a partisan fight that cost Democrats dearly in the 2010 midterm elections.

This time, Democrats say the new aid must be robust and delivered quickly. They do not intend to allow Republicans to dictate the timing nor the reach of the legislation.

“I’m not going to let Republican senators stall for the sole purpose of stalling,” Senator Ron Wyden, Democrat of Oregon and the incoming chairman of the Senate Finance Committee, said on a conference call hosted by the advocacy group Invest in America. He added that his view grew out of his own experience serving as a junior member of the panel during the Great Recession.

Mr. Biden would no doubt prefer to push his proposal through with bipartisan support to show he is able to bridge the differences between the two parties. But the White House has been adamant that it will not chop up his plan to try to secure Republican backing and that while the scope could be adjusted, the changes will not be too substantial.

Like Mr. Biden this year, Mr. Obama entered the White House in 2009 optimistic he could cooperate with Republicans, and there had been promising signs in 2008. In the face of a dire economic emergency, congressional Republicans, Democrats and George W. Bush’s administration had worked closely to approve the $700 billion Wall Street bailout. Republicans also seemed dispirited by steep election losses in November, suggesting some might be open to cooperation.

But to an extent that was not immediately apparent, top Republicans in the House and Senate quickly decided that their best path to reclaiming power was to remain united against Mr. Obama’s agenda, a stance Republicans later acknowledged.

As a result, the administration and Democratic leaders had to make multiple concessions to ensure the votes of three Republicans and a few moderate Democrats needed to provide the bare minimum of 60 votes to overcome deep Republican opposition to the stimulus package. That meant holding the amount to $787 billion, less than what some economists at the time said was needed, and potentially slowing the recovery. 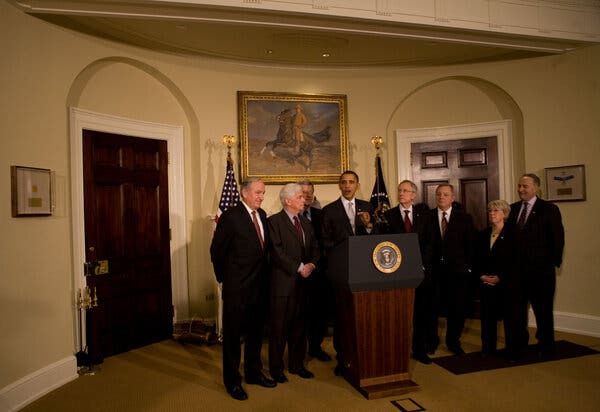 President Obama speaking about health care in 2009. Democrats say they settled for too small an economic stimulus to gain needed Republican support while also extending talks on health care for too long.Credit…Stephen Crowley/The New York Times

Then came the health care law. Democrats were determined to both expand access to affordable health insurance and to work with Republicans in doing so. They were also concerned then about repeating past mistakes, particularly the Clinton health care effort in 1994, whose spectacular collapse was attributed partly to a failure to involve Republicans from the start.

While many Republicans were considered out of reach in 2009, a group of three senators influential on health care policy — Charles E. Grassley of Iowa, Mike Enzi of Wyoming and Olympia Snowe of Maine — engaged in lengthy negotiations with three Democratic counterparts, in a group that came to be known as the Gang of Six.

To bring them along, Democrats proposed a market-based approach rather than the kind of government-run, single-payer program sought by many liberals. They even eschewed a limited public option to mollify Republicans and some moderate Democrats. Still, the talks dragged, and Republicans began pulling back amid a rash of raucous protests at congressional town hall events across the country.

Frustrated and believing Democrats were being strung along, Mr. Obama in September 2009 summoned Mr. Grassley to the White House along with Senator Max Baucus, Democrat of Montana, who was leading the Gang of Six.

Mr. Obama recounted the scene in his new memoir, writing that he had pressed Mr. Grassley on whether, “if Max took every one of your latest suggestions, could you support the bill?” Mr. Grassley was hesitant. “Are there any changes — any at all — that would get us your vote?” Mr. Obama asked, drawing what he described as an awkward silence from the Republican senator.

As they plunge forward this year, Democrats say they do not want to find themselves in a similar position, working with Republicans only to come up short with an insufficient response that does not draw bipartisan support.

Some Democrats still hold out hope of reaching bipartisan agreement on at least some elements of the administration’s coronavirus response and say the party must make a legitimate attempt to come together with Republicans.

“We ought to try to do what we can do in a bipartisan way,” Senator Joe Manchin III of West Virginia, a leading Democrat in the bipartisan talks, told reporters. He said it would then be appropriate for Mr. Schumer to use “other means to move things along” if progress could not be made.