George Springer will not be coming to Queens. The star center fielder, seen by many as the jewel of this season’s free agent class, reached an agreement with the Toronto Blue Jays on Tuesday for a six-year, $150 million contract.

The deal, which is pending a physical, was confirmed by a person in baseball with knowledge of the agreement who was not authorized to speak publicly.

Springer, 30, is leaving the Houston Astros after seven seasons that included a World Series victory and a cheating scandal. He was believed to be one of the prime targets for the Mets in an expensive rebuild after the purchase of the team by Steven A. Cohen. While the Mets have bucked a leaguewide trend by being aggressive this off-season — they traded for the superstar shortstop Francisco Lindor, and have signed multiple free agents — they have thus far resisted overpaying for the league’s top free agents, a group that includes Springer and D.J. LeMahieu, who re-signed with the Yankees for $90 million over six years.

The move came a day after the Mets fired their new general manager, Jared Porter, the former Chicago Cubs executive, after a report of harassment allegations against him.

In Springer, the Blue Jays get a power-hitting outfielder who defends well and has shown an ability to rise to the moment in the postseason. He was once the poster boy for a burgeoning dynasty in Houston, appearing on a Sports Illustrated cover in 2014 that correctly predicted the Astros would be World Series champions in 2017. Springer hit five home runs in that seven-game series, and was named its most valuable player.

While Springer has continued to produce, averaging just under 25 home runs a season in his time in Houston, his accomplishments, and the accomplishments of his team, were tarnished by a complicated sign-stealing scheme that resulted in multiple suspensions and firings — but did not lead to punishments for any of the players involved. 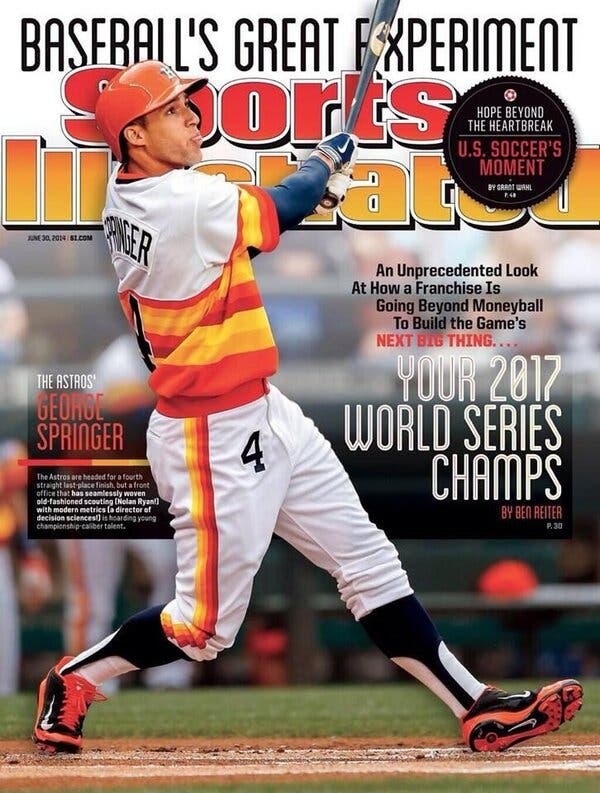 Now he heads to the Blue Jays, a youthful team that broke a streak of three consecutive losing seasons by going 32-28 in the pandemic-shorted 2020 season, losing to the Tampa Bay Rays in the wild-card round. The $150 million contract is the largest in franchise history, surpassing Vernon Wells, also a center fielder, who signed for $126 million over seven years in 2006.

Springer hit 14 home runs with an on-base plus slugging percentage of .899 in 2020. Those numbers were in line with his career averages but were a step down from 2019 when he set career highs with 39 homers and an O.P.S. of .974. He turns 31 in September and will be 36 at the end of his new contract.

Toronto played its 2020 games in Buffalo because of travel restrictions. It has not yet been announced how the team will handle the 2021 season.

With Springer off the market, the top free agent left is Trevor Bauer, a right-handed starter who won the 2020 Cy Young Award for the Cincinnati Reds. He is expected to get top dollar — as is catcher J.T. Realmuto, who is no longer a target of the Mets after the signing of James McCann. Most teams have thus far held back spending after having claimed to have lost millions as a result of the pandemic. According to The Associated Press, just 21 of 181 free agents had finalized agreements entering Tuesday.