There is a long list of reasons that the top free agents in baseball have often ignored Toronto. In most years, the Blue Jays were not willing to spend enough money to entice the players; the tax rate tends to be higher than in many U.S. states; ordinary travel is complicated by border crossings; and, ultimately, the team just was not very good.

Last week, George Springer and the Blue Jays found a way to get past all of those perceived obstacles, and Springer agreed to a six-year, $150 million deal, the largest contract in Blue Jays history.

Toronto has had many great players, including Roberto Alomar, Joe Carter, Roger Clemens, Roy Halladay, Jose Bautista and Troy Tulowitzki. But the team had never signed the biggest free-agent position player on the market until Springer, the former Houston Astro outfielder,committed to a young Blue Jays club that is rising fast.

“When you play against this team like I have, you can see the talent and the potential in their lineup, their staff and their arms,” Springer said Wednesday during a video news conference with reporters. “This team is built to win, and they’re going to be built to win for a long time.”

Getting Springer, 31, to choose Toronto was a coup for the Blue Jays, who finished 32-28 in the abbreviated 2020 season, only one game behind the Yankees in the American League East With a core of talented young players that includes Vladimir Guerrero Jr., Bo Bichette and Cavan Biggio, the Blue Jays sought a veteran star through free agency. They had their eyes set on Springer for quite a while.

“Our attraction to George Springer was several years ago, where it began,” said Ross Atkins, the Blue Jays general manager. “I think any executive in baseball who has watched George play for some time would love to talk about how he would fit onto your team.”

Of course, money is often the main factor for players. In this case, many observers assumed that Springer, who grew up in Connecticut and attended the University of Connecticut, might be enticed to sign with a team closer to his home — a team like the Mets, whose new owner, Steven A. Cohen, offers the financial wherewithal to sign top players. 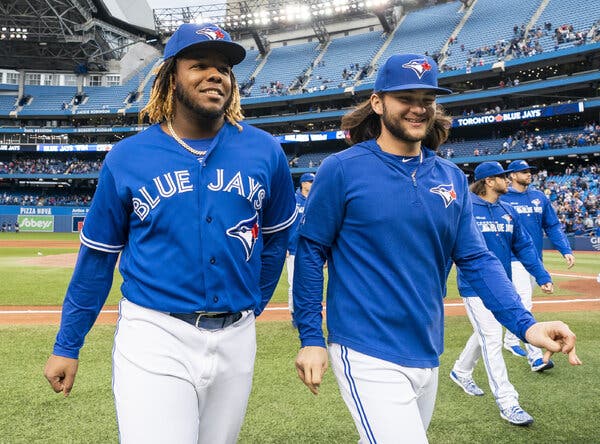 In Vladimir Guerrero Jr. and Bo Bichette, the Toronto Blue Jays have two of the most promising young infielders in baseball.Credit…Mark Blinch/Getty Images

Springer would not discuss interest from the Mets, or from any other team. But over seven years playing in Houston, plus three in the minor leagues, Springer has shown he is more than capable of thriving at a considerable distance from his home state.

“It’s only a short plane flight away, if I really, really want to,” he said of going to Connecticut. “And we play in the A.L. East, and that’s pretty close to home. But at the end of the day, I wanted to go to where I believed I was going to be happy, and I believe I am.”

Last year, the Blue Jays played their home games in Buffalo after Canada restricted travel across the border because of the coronavirus pandemic. The same is likely to hold true in 2021, at least for the beginning of the season, and it is unclear yet where the Blue Jays will play home games. Springer dismissed that as a concern, along with the other issues that have led elite free agents to sign elsewhere.

“You hear a lot about the travel and all that stuff,” he said. “But the reality of it is, it honestly didn’t bother me one bit.”

In Springer, the Blue Jays are getting one of the most complete outfielders in the game at a time when the club is looking to challenge the Yankees and Tampa Bay Rays in their division. In his seven years in Houston, Springer never led the league in any of the top offensive categories, at least not until the postseason, when he has shone.

He was named the most valuable player of the 2017 World Series, in which he batted .379 with five home runs and three doubles as the Astros won their first title. In 63 postseason games over all, Springer has 19 home runs, tied with Albert Pujols for fourth on the career postseason homer list. His ability to produce when the stakes are highest is something the Blue Jays see as more than a fluke. While recent analyses of players tend to focus more on their production over the long haul of a full, 162-game regular season, the Blue Jays noted that they placed a high value on Springer’s strong record in October.

“Players who are prepared and embrace competition, and have an elite desire to win, will fall back on preparation and rise to the occasion,” Atkins said. “George has done that, and that was exceptionally attractive to us.”

Springer said the current core of rising stars in Toronto reminded him of the Astros a half decade ago, before the team had become world champions and playoff perennials with him, Carlos Correa, Jose Altuve and Alex Bregman. That team was found to have illicitly used technology to steal pitching signs from other teams during its championship season, but few would question their talent.

Toronto hopes that it is at the same stage now that Houston was in 2016, and that the addition of Springer, and Marcus Semien, an infielder who agreed to a one-year, $18 million deal on Tuesday, will help create a winning atmosphere that compels legions of Blue Jays fans across Canada to tune in and eventually show up at the ballpark. Then the Jays can add even more proven players, to complement Springer and his young teammates in the future.

“This signing is a reflection of the plan,” said Mark Shapiro, the president of the Blue Jays. “That plan is that we will continue to win and as we win, the revenues will increase, and where those dollars go, I think there’s no limit to what this market can be.”