HE is on a mission to help our pets  . . . and is here to answer YOUR questions.

Sean, who is the head vet at tailored pet food firm tails.com, has helped with owners’ queries for ten years. He says: “If your pet is acting funny or is under the weather, or you want to know about nutrition or exercise, just ask. I can help keep pets happy and healthy.”

Q) I NEED some advice about my five-month-old French bulldog, Ghost Blue.

I can’t take my eyes off him when we are out in the garden. He picks up small chippings, stones, anything he sees, in his mouth.

I’ve tried everything to stop him but all he does is run away from me, with them in his mouth. I worry he’s going to swallow them. Any advice would be much appreciated

Sean says: You can’t wrap him up in cotton wool, Tasha. This is normal behaviour for pups of his age. Some never grow out of it.

It’s a bad idea to chase him and get all excited when he does it because I guarantee the little monkey will find it a great laugh running away from you.

That’s the time he will swallow his precious loot rather than have it taken away from him.

You need to hold back some toys he really likes and tempt him away from stones by bringing them out. The squeakier the better. Replace what he shouldn’t be playing with what he should.

Got a question for Sean?

SEND your queries to [email protected].

Q) ONE of our two-year-old cats, Monty, has developed a liking for Weetabix and scones.

If we are eating these, he climbs all over us trying to get his share.

Sometimes we let him finish off a bowl of Weetabix, and I have sometimes given him a little bit of scone so I can finish the rest in peace.

I don’t let him have any of the dried fruit in it, but would like to know if this is unusual for a cat?

None of the other cats we have had over the years has been like this and his sister Milly is not interested in any food other than cat food.

Sean says: Despite being total carnivores, it’s not that unusual for a cat to develop a sweet tooth.

But it’s really not a great idea to feed them too much human food, like Weetabix or scones.

This can be quite fattening — especially scones. A tiny piece of scone for us might be equivalent to a whole one for Monty, in terms of his daily calorie needs.

You are best to stick with complete, balanced cat food and meaty or fish-based cat treats. I feel Monty’s pain, though — carbs and I have an unhealthy relationship, too.

He used to go out without any problems. But now he looks up and down the street then turns back.

He seems excited to go until he gets to the end of the path, which is very upsetting. I hope you can advise.

Sean says: The first thing that comes to mind is that perhaps Rory is experiencing pain or discomfort.

It’s not uncommon for dogs of this age to have a degree of arthritis in their joints.

And because they are stoic and eager to please us, we often don’t notice they are in pain until something like this happens.

He may have overexerted himself and been very stiff all of a sudden, or it may just have got to the stage he’s finding his usual walks difficult.

The good news is, we can manage arthritis in a variety of ways. But first I would get him booked in with a vet to be examined.

Star of the week

RESCUE cat Sydney has helped Gill and Ron Green each battle back from ill health.

Gill, 65, and husband Ron, 67, were both recovering from cancer when they fostered Sydney, short term, from pet charity Blue Cross in 2019.

The couple from Hitchin, Herts, had fostered 11 cats over the years and never thought to keep one for good.

But this time they did and they have not looked back. Gill, above with Sydney, said: “He has helped us through cancer but also lockdown, especially on days we have not been well. Stroking him and listening to his purr brings a calm over me.” 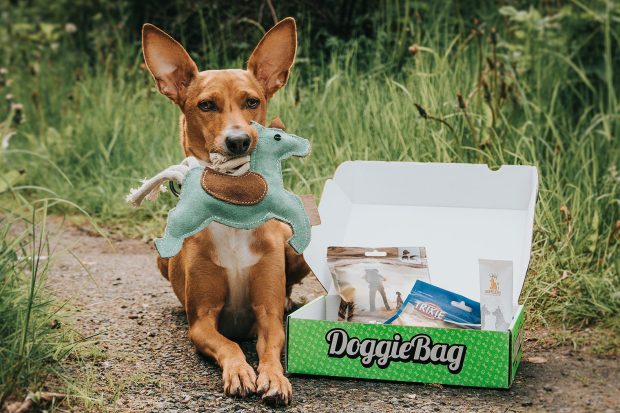 TREAT and train your dog at the same time with this box of goodies from DoggieBag.

DoggieBag started in Norway and has just launched in the UK. Each box includes up to six treats sourced from around the world. We have ten boxes worth £23.99 each to give away. For a chance to win one, email DOGGIEBAG to [email protected]

Dog thieves cash in on lockdown

DOG owners are being urged to keep their pets safe after last year saw a 170 per cent rise in the number of pooches being stolen.

During the pandemic the average price of a pup has more than doubled, from £888 to £1,883, according to pets classified website Pets4Homes. Thieves see them as easy money.

Debbie Matthews, 65, founded Vets Get Scanning after her dogs Widget and Gizmo were snatched. They were later dumped after a TV appeal by her late father, legendary TV host Bruce Forsyth.

She advises anyone whose dog is stolen to make them “too hot to handle”.

“Have images of them taken from different angles ready to send to doglost.co.uk.

“Those first few hours are so important. Call the microchip provider and have them flag your pet as stolen so details can’t be changed.”

Owners are also urged to keep dogs in view on walks, not to leave them outside shops and to vary walking times.