It was a few days before Rosh Hashana, and Dr. Margaret Swenson Soper suddenly found herself with no plans. She had just learned that the tickets she thought she had to attend services had fallen through, and was feeling sorry for herself.

“I had a little pity party for myself,” Dr. Soper, 41, said. “And then the next morning I woke up and I thought: ‘You know what? I’m going to figure something out.’”

She reached out to a Facebook group of other divorced physician moms, and ended up connecting with a woman whose boyfriend at the time, Sandy Climan, was hosting a Rosh Hashana dinner in Los Angeles, where Dr. Soper lives. After exchanging numbers, Mr. Climan invited her to the dinner. Having never met him or his girlfriend before, Dr. Soper searched Mr. Climan’s name on Google and was daunted when she learned that he was a well-known Hollywood producer.

“Suddenly I got really intimidated and thought, ‘Wait a minute, now I’m going to be at this fancy, big Rosh Hashana event, and I’m going to be the nerdy doctor there and I’m going to be so out of place,’” said Dr. Soper, who is a radiation oncologist at Kaiser Permanente Los Angeles Medical Center. “And then I thought about this guy, Jason.”

Dr. Soper and Jason Alon Kessler had matched on the dating app the League in August 2018. They had spent the last few weeks messaging, but hadn’t exchanged phone numbers yet. Mr. Kessler is a screenwriter who is currently working on an upcoming limited series for Apple Studios, and Dr. Soper thought that he might enjoy the dinner, which would at least make for a memorable first date.

Unbeknown to Dr. Soper, Mr. Kessler, who had recently moved to Los Angeles, also had no plans for Rosh Hashana. He wasn’t going to be able to spend the holiday with his family on the East Coast, and was in the midst of his own pity party when she mentioned the dinner. He suggested that he be her date, and the next evening showed up at her place with a bouquet of flowers.

When they arrived at dinner, they realized that what they had thought would be a large event was an intimate meal for about seven. Everyone else at the table was either family or close friends, and Dr. Soper and Mr. Kessler made a split decision to pretend that they were already a couple, to try and stem some of the awkwardness. As the night wore on, they bonded over their shared secret, and got to know one another through their tablemates.

“Feigning intimacy was the perfect way to allow real intimacy to grow,” Dr. Soper said. “By pretending that we knew each other ——”

They were soon spending much of their free time together, and about five months after they began dating, Dr. Soper introduced Mr. Kessler to her 5-year-old son, Eli Zipser. “I’ve been waiting my whole life to find somebody I could really fall in love with,” Mr. Kessler said. “Only the luckiest among us get to find their happily ever after, their person they’ve been dreaming of. And it’s just an embarrassment of riches that mine came with such an incredible son.”

In November 2019, Mr. Kessler proposed to Dr. Soper on a hiking trail near the Griffith Observatory. It was a trail that he often hiked when he first moved to Los Angeles to pursue his dream of screenwriting.

“He would sit in that spot overlooking the city, and wonder what his future held,” Dr. Soper said. Now, two years later, he was back in the same spot, this time with Dr. Soper, who was pregnant with the couple’s first child. 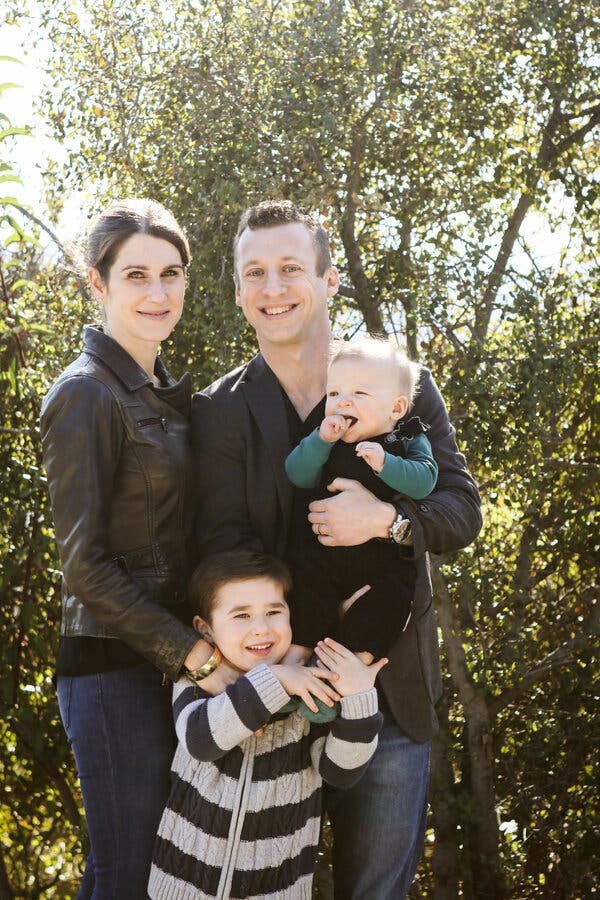 On April 26, 2020, the couple had a modern take on a tenaim ceremony, an ancient Jewish engagement ceremony, where they read vows to one another and lent each other their wedding bands. Rabbi Nicole Guzik, from Sinai Temple in Los Angeles, led the ceremony remotely. Dr. Soper gave birth to their son, Jordan Kessler, a month later.

The couple had planned on waiting until after the pandemic to have a large wedding, but as the months dragged on, they ultimately chose to get married in an intimate ceremony with just the two of them and their children.

They were married on Dec. 29, on the same hiking trail near the Griffith Observatory. Judge Judith Meyer of the Los Angeles County Superior Court officiated, while their sons, Eli and Jordan, watched.

As for their Rosh Hashana host, Mr. Climan?

“We’ve been to two Thanksgiving dinners with him, one of which we told him she was pregnant,” Mr. Kessler said. “It’s become a special relationship for us.”