This week saw two transfers of power in North America. One involved direct, actual power while the other was more symbolic. 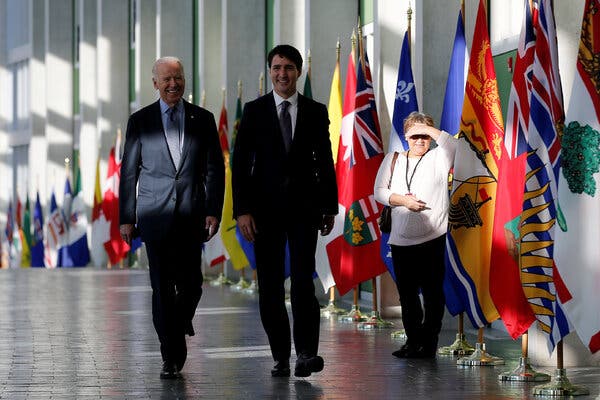 As my colleague Catherine Porter reports, the swearing-in of Joseph R. Biden Jr. as president of the United States on Wednesday is widely expected to bring a reset to U.S.-Canadian relations after a tumultuous four years under former President Donald J. Trump.

[Read: Justin Trudeau Gets Call From Biden as Canada and U.S. Mend Relations]

While many Canadians felt a swell of relief at the transition of power, not everyone was thrilled by the handover, including Jason Kenney, Alberta’s premier. As was widely expected, one of Mr. Biden’s first acts was to kill the Keystone XL pipeline that was to link Alberta’s oil sands and, eventually, refineries on the Gulf Coast that have a thirsty appetite for the heavy crude oil they produce.

Mr. Kenney vowed to continue fighting for Keystone XL, which his government kept alive last year through an investment and loan guarantees valued at just over 7 billion Canadian dollars. He also demanded that Prime Minister Justin Trudeau effectively emulate the ways of Mr. Trump and use trade sanctions in retaliation for Mr. Biden’s action. But several people I interviewed this week said there was probably no legal or trade channel that could reverse the new president’s decision.

But unlike with Mr. Biden’s pipeline action, no one foresaw that Governor General Julie Payette would step down this week. We’ll probably never know the precise reasons for her sudden departure, though it was clearly triggered by an independent human resources review that, based on what Mr. Trudeau and others vaguely indicated, suggested she and her top assistant were among Canada’s worst bosses.

Citing privacy reasons, the government is not releasing that review. But for months Ashley Burke of the Canadian Broadcasting Corporation has been producing a steady stream of horror stories from Rideau Hall, the governor general’s official residence and workplace. Other reports have questioned a number of Ms. Payette’s actions since she, a former astronaut, took office in 2017, lending the impression that she had a bad case of buyer’s remorse over becoming Canada’s head of state as Queen Elizabeth II’s representative.

While Mr. Trudeau can’t be blamed for how Ms. Payette acted once she was in office, it was clearly his call to put her there.

Barbara Messamore, a professor of history at the University of the Fraser Valley in British Columbia and the author of the definitive book on how the governors general system developed in Canada, was among the many people who told me that Mr. Trudeau might have been spared a likely uncomfortable phone call with the queen on Friday if in 2017 hehad continued to use a nonpartisan advisory panel to help select her Canadian stand-in. That system was introduced by Stephen Harper, his Conservative predecessor.

Given that Mr. Trudeau introduced a similar advisory panel for choosing who to appoint to the Senate, his decision to revert to the old way of keeping the selection of the governor general largely within his office is all the more puzzling.

On Friday, Mr. Trudeau acknowledged what was apparent: “The vetting process that was in place was followed, but obviously we’re going to also look at ways we can strengthen and improve the vetting process for high-level appointments.”

He was, however, less forthcoming when it came to questions about whether that vetting process had discovered, as journalists had, that allegations of abusive behavior by Ms. Payette had come up at other places. And Mr. Trudeau offered little when asked whether he had ignored any warnings that emerged from the process.

“It is the most senior appointment in Canada,” Robert Bothwell, a professor of Canadian history at the University of Toronto, told me. “The blame really lies with the prime minister. This is really something he has to bear.”

For now Richard Wagner, the chief justice of the Supreme Court, will do double duty and also fill in for the governor general, something other head jurists have done in the past.

Some people, including Professor Bothwell, told me that they hoped Ms. Payette’s departure might finally turn the minds of Canadians toward rethinking the role of British monarchs in Canada.

By way of background, Frank Graves, the president of the polling firm EKOS Research, said that his surveys showed that the monarch was now a “modest source of national identity, which has been dropping over the past couple of decades.”

Professor Messamore said that regardless of the current mess at Rideau Hall, “there’s a vital reason for the office.” She said that Canada enjoyed stability by separating its head of state, the queen via the governor general, from the political head of government, the prime minister. Whether a monarch in London is necessary to achieve that goal is an open question.

It seems unlikely that while Queen Elizabeth is still alive there will be much interest in taking on reforms that would require the herculean task of getting the agreement of all 10 provinces. But Professor Bothwell said that when the queen does dies or step down, “I don’t think anybody knows what we’re going to do.”

Robert Waldner, 17, built a snow cave after being separated from his father and brother while snowmobiling on a trail in British Columbia.Credit…via Robert Waldner

A native of Windsor, Ontario, Ian Austen was educated in Toronto, lives in Ottawa and has reported about Canada for The New York Times for the past 16 years. Follow him on Twitter at @ianrausten.

How are we doing?
We’re eager to have your thoughts about this newsletter and events in Canada in general. Please send them to [email protected]

Like this email?
Forward it to your friends, and let them know they can sign up here.