A former national speedskating coach in South Korea was sentenced on Thursday to more than a decade in prison on charges of raping an Olympic athlete.

The coach, Cho Jae-beom, was accused of rape in 2019 by Shim Suk-hee, a two-time Olympic gold medalist in short-track speedskating who said he had sexually assaulted her repeatedly starting when she was 17. A district court in the city of Suwon sentenced Mr. Cho to 10 years and six months in prison, along with 200 hours of treatment in a program for sex offenders.

Ms. Shim, 23, is a well-regarded figure in a sport that is a source of national pride; short-track speedskating has produced more Olympic gold medals for South Korea than any other nation. But like other sports in the country, it has long been shadowed by allegations of corruption and abuse, with few victims willing to speak out.

Prosecutors said the sexual assaults took place on 30 occasions from 2014 to 2017. Mr. Cho, who admitted to abusing Ms. Shim physically and verbally, denied the rape accusation, but the judge said on Thursday that Ms. Shim’s testimony was credible, and that text messages the two had exchanged also pointed to an inappropriate coach-athlete relationship.

Ms. Shim’s lawyer, Lim Sang-hyuk, said that although Mr. Cho’s conviction was a sign of progress, he felt the sentence was too lenient considering the suffering Ms. Shim had to endure.

In recent years, elite athletes around the world have exposed a culture of abuse in which coaches and doctors hold outsize power. In South Korea, physical abuse has often been seen as a harsh but inevitable part of training, especially when athletes go on to win prestigious prizes. 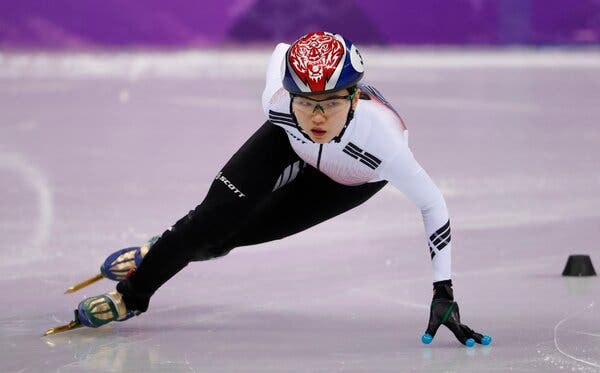 Mr. Cho, 39, was convicted in 2018 of physically assaulting Ms. Shim and three other athletes, and his original sentence of 10 months in prison was extended to 18 months on appeal. He was fired as coach of the national short-track speedskating team earlier that year, shortly before the start of the Winter Olympics in Pyeongchang, South Korea. Ms. Shim won her second Olympic gold medal at those Games, having won her first in Sochi, Russia, in 2014.

Her sexual abuse accusations against Mr. Cho were seen as a turning point in efforts to address abuses in South Korea’s speedskating community. President Moon Jae-in responded by urging government officials to take such allegations seriously. “This unveils the humiliating underside of our country’s glorious facade as a sports powerhouse,” he said in January 2019.

Some experts said that the government had long overlooked the widespread abuse of athletes and that recent measures, including the introduction of whistle-blower hotlines, had yielded little results. They suggested that it took Ms. Shim’s star power to hold people accountable.

“If Shim Suk-hee were not an Olympic gold medalist, her case too could have been buried,” Chung Yong-chul, a professor of sports psychology at Sogang University in Seoul, the South Korean capital, said at the time.

After the sentencing on Thursday, Ms. Shim said that she hoped it would encourage survivors of abuse to come forward with their experiences. “I hope the court’s decision will somewhat help victims within our society find their voice,” she said in a written statement. “I sincerely hope that similar incidents will never happen again in the future.”

Tiffany May reported from Hong Kong, and Youmi Kim from Seoul.