For nearly a century the firm of Teal & Mackrill in the port city of Hull in northeast England has made paints for special applications, like fishing trawlers and factory floors. It produces marine paint, for example, with ingredients to prevent barnacles from encrusting hulls.

Now in a little-noticed consequence of the new Brexit trade deal, the company is facing real concerns about its future. Geoff Mackrill, the third member of his family to helm the company, said that growing British regulatory burdens on chemicals may mean that eventually he won’t be able to obtain some of the additives that make his paints distinctive.

“The worry is that some of those materials that we use,” he said, “may become unavailable because of those costs.”

It is a concern that is spread across Britain’s £33 billion (or about $45 billion) a year chemical industry.

Prime Minister Boris Johnson, when he announced the trade deal on Dec. 24, said Britain would now be free “to set our own standards, to innovate in the way that we want.” Business people like Mr. Mackrill were relieved that Britain had avoided a chaotic exit and that goods made in Britain could continue to cross over to Europe free of tariffs.

But some companies, notably in the chemical industry, are finding that business has become more complex rather than easier. The European Union’s elaborate and burdensome regulations may no longer apply inside Britain, but they remain a fact of life for British firms like Mr. Mackrill’s that wish to continue selling their goods in Europe.

Adding to the burden, the British government is creating its own demanding set of chemical regulations, a mirror of the E.U. laws. An industry group said the cost to chemical businesses of recreating the European regulations, which requires extensive documentation, could reach as much as £1 billion, potentially a major burden on small firms and those with thin earnings margins.

The regulatory changes, plus the fact that chemicals can have long supply chains, have led some businesses to rethink their activities in Britain.

Before Brexit, Aston Chemicals, a firm based in Aylesbury, about 50 miles northwest of London, imported chemicals from around the globe, performed the necessary paperwork, paid any import duty, and then dispatched them by the truckload to European makers of moisturizers or dandruff shampoos.

Using Britain as a hub “worked incredibly well,” said Dani Loughran, the company’s managing director. But after Brexit, it doesn’t.

Trucks in Britain bound for Europe now face lengthy customs procedures at the border. And while British-made goods can still enter the European Union duty free, that’s not the case for goods that originated elsewhere.

So, an importer like Aston Chemicals needs to pay tariffs on products made in the United States or Asia, and then again when it distributes them to the European Union, effectively doubling the rates, Ms. Loughran said.

Consequently, the company will now instead supply Europe from a base in Poland, a member of the European Union. It has cut its British warehouse staff from three to one. 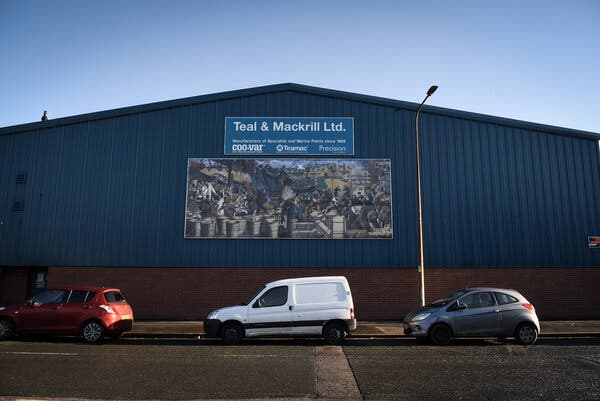 The Teal & Mackrill factory in Hull, England, manufactures paints for the marine industry and other special purposes.Credit…Mary Turner for The New York Times

These new obstacles aren’t just a drag for the chemical industry.

“I think everyone who has been using the U.K. as a distribution center for Europe is going to be affected in the same way,” Ms. Loughran said. They “are going to find it very difficult from now on.”

The shift will leave Ms. Loughran’s British arm mainly catering to the local market — but even that prospect has a regulatory cloud hanging over it.

She is accustomed to working with the European Union’s chemical regulation system known as REACH, which has a reputation for strictness. Companies are required to submit lengthy files on each chemical substance that they supply inside the European Union, detailing its properties and uses as well as the potential risks and hazards, to the European Chemical Agency, based in Helsinki. Ms. Loughran said REACH was “a headache, which we dreaded and cursed,” but at least it covered the whole trading bloc including Britain.

But the chemical industry had hoped that, after Brexit, Britain and the European Union would continue sharing data filed under REACH, but that language did not make it into December’s deal.

Companies now face the prospect of making voluminous and largely duplicate filings on the chemicals they want to sell in Britain with a newly created British agency, UK REACH. The fees charged and the work required in reconstructing data on product safety and other matters, which is expected to take several years, could eventually add up to £1 billion, according to estimates from the Chemical Industries Association, a British trade body.

A company can’t simply cut and paste statements and files that have been previously lodged with the European regulator because, in many cases, the filings are full of commercially sensitive intellectual property belonging to other firms.

Stephen Elliott, the industry group’s chief executive, said chemical firms operating in Britain could be forced to replicate almost “word for word” the submissions they have already made to the European regulator.

“That is a pointless use of resource,” he said.

Mr. Elliott said that the industry continued to lobby the government to agree to accept the filings it has already made under REACH, but said that at this point such an outcome looked like “a tall order” because of the government’s aversion to relying on European regulation.

Geoff Mackrill, the third member of his family to lead Teal & Mackrill, said he fears Brexit may make it hard to obtain some of the chemicals he uses in the company’s paints. Credit…Mary Turner for The New York Times

Executives say it makes little sense for chemical companies to incur similar regulatory costs to those of the European Union to sell products in Britain, whose economy is around one-seventh the size of that of the European Union. Industry executives also doubt that the British chemical agency will have sufficient staff and resources to measure up to its European counterpart, which employs around 600 people.

“The combination of Brexit and UK REACH regulations isn’t very helpful when companies are considering where to site new investment,” said Paul Hodges, chairman of New Normal Consulting, a firm that focuses on chemicals. In other words, new investment may go elsewhere.

A souring of the chemical industry on Britain would be a blow to the post-Brexit economy. Chemicals may not be as visible as some other industries, but these substances are integral to a wide range of products, including cars and shampoo. It is a major business in Britain that accounts for a hefty 9 percent of exports, with almost 60 percent going to the European Union, and employs about 94,000 people, according to government statistics.

One worry is that firms will decide that supplying some chemicals that earn low profit margins or sell in small quantities, like the ingredients Mr. Mackrill buys for his paints, is no longer worthwhile. So far the leaders of the industry are taking a wait-and-see approach, though they look askance at new red tape and costs in Britain.

BASF, the German chemical giant, which sells around 1,200 substances in Britain, estimates that UK REACH could cost the company £70 million.

“If the costs of bringing products to the U.K. market rise to make them uneconomic, we are not going to do it and make a loss,” said Geoff Mackey, director of communications and sustainability at BASF in Britain.

Smaller British companies, though, are more likely to feel the impact. If they want to continue to be serious players, they need to sell to Europe and stay in line with European regulation, they say.

The Manchester, England, plant of BASF, the German chemical giant. If Brexit means it will cost the company too much to bring its products into Britain, “we are not going to do it and make a loss,” said a company official.Credit…Mary Turner for The New York Times

Mr. Mackrill has already felt obligated to set up a company in the Netherlands to comply with the rules of the European Union, where he sends around 10 percent of his products. He also has up to two people working full time on the regulatory implications of Brexit, a drain on the resources of a firm with 70 employees.

Mr. Mackrill, who is now executive chairman of his company, seems confident that a company that has been around since the early 20th century can navigate the Brexit shoals, but he says others may judge that the easiest course is to move their operations to the giant market next door.

“Some of the manufacturers will probably look at it and go, ‘Why don’t we manufacture that in Europe?,’ Mr. Mackrill said. “That’s not good for U.K. PLC,” he said, meaning British business.