MELBOURNE, Australia — Just days after residents of Perth, Australia’s fourth-largest city, were ordered to stay in because of the coronavirus, some were forced to flee their homes on Tuesday as a ferocious wildfire bore down on the city’s outskirts.

The blaze northeast of Perth, which began on Monday and was fueled by hot, dry and windy conditions, was out of control by about 2 a.m. on Tuesday, officials said. Residents described a confused scramble in the middle of the night, as they were unsure where they were supposed to go in light of the lockdown rules.

“We wish it would be either one or the other, not both,” Gemma Martin, a 33-year-old hospitality worker who fled with her children, said of the fire and the lockdown.

By Tuesday afternoon, close to 20,000 acres had been razed, dozens of properties had been destroyed and one firefighter had been hospitalized for smoke inhalation, the authorities said. People in downtown Perth reported ash raining down from an amber sky, more than 19 miles away from the fire, which had been named after the nearby town of Wooroloo.

“It’s still a very, very active and very aggressive fire and very much out of control,” said Kevin Bailey, mayor of the City of Swan, a region within the Perth metropolitan area where the blaze had done the most damage. He added that it was not realistic to expect residents to adhere to lockdown conditions in a deadly fire zone.

Instead, he said, people should go to the homes of friends or family members if possible, and if not, to evacuation centers — where, Mr. Bailey said, the authorities were working “within the protocols as best we can.” 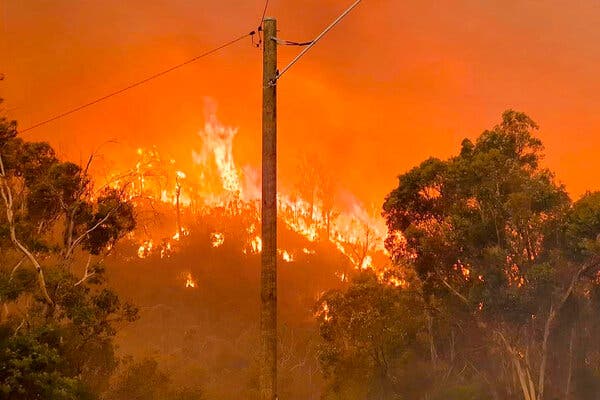 The Wooroloo fire, named for a town near Perth, had razed nearly 20,000 acres by Tuesday afternoon.Credit…Brenden Scott/West Australia Department of Fire and Emergency Services, via Associated Press

The fire, reminiscent of the infernos that devoured Australia’s southeast coast more than a year ago, is another reminder that as climate change spurs more frequent and intense natural disasters, Australia and other countries are likely to find themselves dealing with intersecting catastrophes.

Australia has “been pretty well prepared for the eventualities of these sorts of crises,” said Andrew Gissing, a researcher with the Bushfire and Natural Hazard Cooperative Research Center in Melbourne.

Perth and the surrounding area were put on a strict lockdown on Sunday because of a single coronavirus case, the first one outside quarantine in the state of Western Australia in almost 10 months.

The wildfire started around noon the next day, sparked by a house fire, according to Mr. Bailey, the mayor. In warnings posted to Facebook early Tuesday and updated throughout the day, officials told people in the fire’s path that they were in danger and needed “to act immediately to survive.”

Residents of locked-down Perth suburbs, including people who had been ordered into isolation, were told to seek refuge immediately. Those who could not return to their quarantine locations within the hour were asked to notify the police that they had moved.

“It was pretty clear that we needed to evacuate, but it just wasn’t as clear as to where we should go,” said Ms. Martin, the hospitality worker, who left home with her three children, ages 3 to 11 — at first to an evacuation center, though they were planning to relocate to a friend’s home. Her partner initially stayed behind to defend their home but later joined them.

Ms. Martin said that while the dual disasters were overwhelming, “if anything, last year taught us to be grateful for what we do have, and to be resilient.”

A police checkpoint in the Perth area on Tuesday.Credit…Richard Wainwright/EPA, via Shutterstock

May Dunlop, who runs an Italian restaurant northeast of Perth that was donating meals to evacuees, said that families had stopped for takeout in cars filled with belongings and pets, uncertain of their next destination.

“You can see, they’ve got boxes, clothes, their dogs, and they’re looking for somewhere to go,” she said. “As well as the lockdown, we got slammed with the fire evacuation, so we’re in dire straits.”

By Tuesday afternoon, more than 250 firefighters had been deployed to fight the fire. But between the strong winds driving the fire and the need to use some personnel to protect people and property, they were unable to suppress it, the authorities said.

Because of the coronavirus, limits have been placed on how many firefighters can travel together in a vehicle, said Craig Waters, the deputy commissioner of Western Australia’s fire and emergency services.

Mr. Waters told reporters on Tuesday afternoon that the changing climate was making Australia’s bushfires harder to fight. “We just don’t get a handle on them,” he said, adding that the northeastern Perth region was “not out of the woods by any measure.”

Lin Neighlands, who lives in the town of Bakers Hill, said that while the fire had spared her home, numerous friends had lost theirs.

“We’re luckier than most,” said Ms. Neighlands, who was looking after horses that had been evacuated. “You just have to get on with it.”