“No ring, no bring.” That was the family vacation rule that Nicole Iris Schloss knew all too well. Gregory Scott Chatzinoff got wind of it after they reconnected in May 2018 via the JSwipe dating app, and started dating.

“Unless you’re engaged, your boyfriend can’t come on vacation with us,” Ms. Schloss recalled her parents telling her and her sister, Rachel, half-joking, but they meant it.

The couple actually had a vague, distant memory of each other from the summer of 2001 at Camp Laurel South in Casco, Maine.

Ms. Schloss described herself as a “dorky” sixth grader then with braces, glasses and frizzy hair. “I remember that he was very short, he’s 6-foot-1 now. I was on the taller end as an 11-year-old girl.” Mr. Chatzinoff, a year older, said he was a “scrawny kid” and spent most of his time water skiing, wakeboarding and playing tennis.”

Six years later, in July 2007, with camp and about two dozen mutual friends in common, she friended him on Facebook before they each headed off to college.

“Out of the corner of my eye I noticed things like, ‘Oh, this guy I went to camp with went to Duke.’” He also received an M.B.A. from N.Y.U.

“I was the randomly selected participant at a Knicks game to shoot free throws during a time out,” said Mr. Chatzinoff, 32, a director of business development and partnerships at Discovery Golf in New York, a division of Discovery media company.

“Omg,” she said in a Facebook message. “Just saw you sink some free throws at the Knicks game and took a silly amount of pictures. Nice job!!!!!”

Mr. Chatzinoff replied to her message, and to dozens of others,with a succinct: “Haha thank you.”

“It was a funny, isolated incident,” said Ms. Schloss, 31, a vice president who runs contemporary art day sales at Sotheby’s in New York.

Three years later, in May 2018, after he spotted Ms. Schloss on JSwipe, she swiped right. 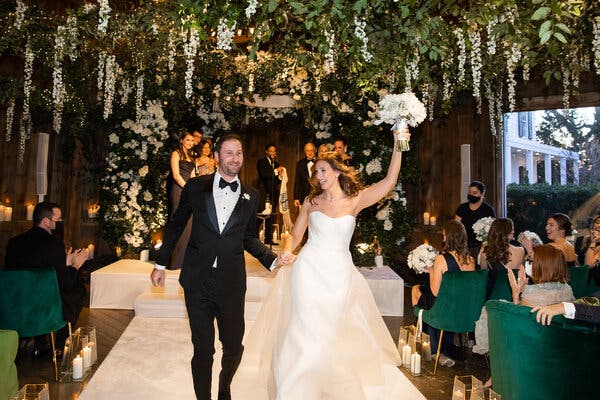 They met the next eveningat Anfora, a wine bar in Greenwich Village, and halfway through the five-hour date had their first kiss. He later walked her home to NoHo.

“It was like catching up with an old friend,” she said. “I wasn’t even thinking, ‘Does my hair look good?’”

Mr. Chatzinoff recalled their relationship “took off like a cannonball,” and they spoke everyday when she then went to Tokyo for Sotheby’s.In August 2019, she moved into his Upper East Side apartment.

In December, he showed up the last full day of her family vacation in St. Barts, and proposed on Saline Beach.

Ms. Schloss froze, as she approached the beach with her family, who were all in on the plan. She noticed him from a dune above and saw their initials with a heart drawn in the white sand.After she ran down to him, he got down on one knee with the ring, and the vacation ban swiftly lifted.

They planned awedding with more than 300 guests at Cipriani 25 Broadway in New York, but in late summer amid the ongoing coronavirus pandemic they scaled down, but kept their palindromic date.

On Jan. 23, Rabbi Benjamin Spratt officiated at Topping Rose House, a restaurant and hotel in Bridgehampton, N.Y., before immediate family and most of the bridal party. More than 200 watched on Zoom.

Later, for a toast her father surprised everyone with a special vanilla rum found in St. Barts.