Read this in the little voice in your head, and tell me it doesn’t sound familiar: Is this for real? It’s got to run out of steam. It can’t just keep going like this. How is this even happening?

What comes to mind? Maybe a recent event in politics, or perhaps a particular politician. A conspiracy theory that was treated as a punchline, then a nuisance, then a crisis. Maybe it’s something sillier — a whole new digital currency named after a meme. Perhaps then the voice in your head really wants to say: Why not? Let’s see where this goes.

You may have guessed that, right now, we’re talking about stocks.

Individual investors, many of them moved by calls to action on Reddit and other social platforms, have spent recent weeks aggressively buying up stock in GameStop, the struggling video game retailer, driving the price to extraordinary highs. On Jan. 28, 2020, it was treading at under $4; this year, on the same date, that number briefly exceeded $480. Thousands of traders, amateurish and sophisticated alike, made money, fast. Hedge funds that had bet against GameStop lost billions.

Discussion and planning around GameStop investment unfolded most visibly on a subreddit called WallStreetBets, where traders share tips, “deep dives,” investment theories and memes. It had grown substantially in size over the past year, especially as some of its users enthusiastic bets on Tesla paid off. (Its membership more than doubled in size this week, to over 6 million subscribers.) Members have spent recent days encouraging each other to hold onto GameStop — or buy more — through massive swings in price.

As a financial and cultural event, this all seems genuinely novel, with no single precedent able to hold much explanatory power. There is plenty of fun, consonant trivia about internet stock trading bulletin boards and chat rooms, as well as from the retail trading boom of the 1990s. There could be lessons in the story of 19th century bucket shops, which allowed regular people to gamble on, but not in, the market, before rolling out to dinner in horse-drawn buggies.

If you absorbed the rise of cryptocurrencies, this all may feel a bit less foreign. Likewise if you’ve kept up with the (market) story of Tesla, whose founder, Elon Musk, who has gone to war with short sellers, got in on the GameStop action this week. The precedent offered most enthusiastically by WallStreetBets is the one provided by finance itself: Professionals have been manipulating markets for years. Now it’s our turn. This doubles as a challenge to the finance world: Tell us how this is different.

But to really understand how WallStreetBets and GameStop took off, it helps to be familiar with the environment where they gathered strength. Reddit’s uncommon qualities as a community platform, and as a marketplace, can help explain why the GameStop situation feels so unsettling and strange — and, from the outside, so uncannily familiar. 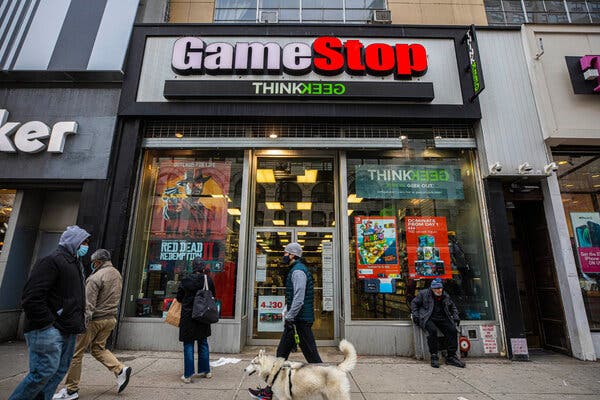 On Jan. 28, 2020, GameStop’s stock price was treading at under $4; this year, on the same date, that number briefly exceeded $480.Credit…Hiroko Masuike/The New York Times

On its face, Reddit is a huge collection of forums overseen by a single private company. It inhabits a gray zone between small, intimate communities with shared expectations and norms and the mega-platforms that tend to obliterate such things. Its business is to let people gather for free, generating communities and content, and then assigning value to that content so that it can be sorted and shown to millions more people, some of whom see ads.

Maybe Reddit is where you find interesting links and watch funny videos. Perhaps it’s a place where you hang out with a small group of friends, or post to a community of millions. More likely, it’s a place you’ve heard of and perhaps visited before, where you know people are up to lots of things, most of which don’t concern you, until they do. Like other social platforms, Reddit has struggled with harassment, hate speech and abuse, and sometimes banned communities whose influence concerned them.

For people who study social platforms like Reddit, WallStreetBets — a clear example of an insular Reddit community breaking through to the larger site, and then beyond — called to mind a specific recent precedent: The_Donald, the subreddit that was, for a few years, the staging ground and the central organizing platform for supporters of Donald J. Trump.

To be clear, these precedents aren’t necessarily about ideology or broad style. Some commentators have suggested that the activity represented by WallStreetBets and Trumpism are part of the same populist, anti-elite phenomenon, but if Trumpism in general is instructive at all here, it’s as a reminder that self-described anti-elite movements can, in fact, turn out to be much more complicated than that.

WallStreetBets may look like a wall of slang, memes, jargon and inside jokes, largely populated by men, and it is. But it’s also very much a financial forum, and one that shares subscribers with other, more straightforward financial forums. (All of the top 20 subreddits with which WallStreetBets shares subscribers concern stocks, finance, betting or cryptocurrency. The first one that isn’t, sandwiched between PersonalFinanceCanada and Poker, is a community called FrugalMaleFashion.) It has a long and complicated set of rules beyond the ones enforced by Reddit itself, some broad (no market manipulation) and some narrow and exclusionary (screenshots of your “positions” must show “equity or losses of more than $2,500 or $10,000 USD for options or stocks respectively”).

Its unwritten norms are more numerous but just as rigidly enforced. You’re with them or against them; there are other subreddits for doubters. Express skepticism and you’ll be branded a hedge fund plant. To expect debate or earnest discussion is to miss the point: This isn’t a social community, or a deliberative space, but a group performance in service of a specific goal. In recent weeks, the only way to get up to speed with WallStreetBets would have been through full immersion, absorbing comments about “tendies” and “diamond hands” and “holding the line” until you worked up the nerve to post the group’s most beloved slogan for yourself: “We like the stock.”

It’s this performance that feels so familiar. “In the early days of The_Donald, there was an interesting mix of gleeful disbelief around the success of the subreddit,” said Lana Swartz, a professor of media studies at the University of Virginia and the author of “New Money: How Payment Became Social Media.” Their stated goal, after all, was “to make a meme president.”

The_Donald wasn’t a place to debate the presidential election, or discuss the latest goings-on with their preferred candidate. “What I’m interested in is letting Donald Trump supporters speak among themselves,” a moderator of the subreddit told me in early 2016. “That will help them consolidate a stronger position.”

In addition to providing a staging ground for some of Mr. Trump’s supporters, The_Donald was at war, immediately, with the platform around it. It made a mockery of Reddit’s rules, and of its stated intentions around cultivating communities. The_Donald ruthlessly antagonized other candidates’ subreddits, then Reddit as a whole. Among its unspoken rules was an expectation that users manipulate the platform as a matter of course, upvoting pro-Trump content regardless of its relative quality, because doing so would make it visible to users elsewhere on the platform, or force Reddit to intervene, inviting the Redditors to cry censorship. This strategically disingenuous approach proved effective, not just on Reddit but well beyond it.

A potent mixture of nihilism, obfuscating humor and a clear common goal was paired with “a kind of lock-step moderation that adheres very closely to the Reddit terms of service,” said Ms. Swartz. “Anyone who has ever done any type of moderation knows that it’s really hard to sustain a healthy community. It’s really hard to keep everyone happy and to moderate,” Ms. Swartz said. “If your goal isn’t to create a healthy discussion community, but rather to make power and memes that can spin out elsewhere, that’s quite a bit easier.” The_Donald eventually became an administrative nightmare for Reddit, all but breaking the site. Up until it was banned by Reddit last year, it executed its purpose efficiently. One reason it survived as long as it did, according to the company, is because its moderators remained “cooperative.”

Users of both The_Donald and WallStreetBets acknowledge a debt to 4chan (WallStreetBets’ tagline: “Like 4chan found a Bloomberg terminal”). This debt to the infamous message board that delights in chaos is stylistic but also functional: to always seem like you might be joking, well beyond the point at which you should be taken seriously, is to guard yourself against accurate interpretation and evaluation.

It also provides something like deniability within the community itself. In communities like this, for which actual community formation is beside the point, Ms. Swartz said, “it’s hard to trace everyone else’s intentions.” (One of the leaders of the WallStreetBets GameStop campaign was revealed by Reuters to be a chartered financial analyst from Massachusetts.) By the time power and influence is actually consolidated, motivations aren’t really relevant anyway. This is the moment the joke becomes real. The moment that the subreddit emerges to the general public, fully formed and startlingly confident, its workshopped performance visible to the rest of the world. This is when the voices speak up: Is this a joke? It seems like it’s really … happening? And to some: Let’s see where this goes. Why not?

So what’s the joke, exactly? For The_Donald, one “joke” was that a bunch of self-described losers could help Donald Trump become “God Emperor.” (They were happy with “President.”) For WallStreetBets, the “joke” was that a group of self-described losers (their preferred real descriptors are unprintable) could rig the financial system in their own favor. The punchline was GameStop, and tens of billions of dollars in actual market activity.

The bigger joke, shared by these communities and plenty of others, is, well, everything. Everything is a farce and a fraud, and the surest, or at least most available, way to get ahead is to treat it as such. This is a profoundly nihilistic worldview, and one that in plenty of other contexts might meet hard limits, or come with terrible costs.

This sort of belief, too, is far bigger than any one tool used to express it, but Reddit provides an ideal context in which it can flourish. It’s the big joke in miniature: a privately ruled space in which the rules can be changed at any time, one that points to community, sharing and discussion to distract from its priorities as a moneymaking operation. It’s a place that offers you special opportunities if you proceed from the assumption that it is fundamentally illegitimate, and should be treated as such. What are they going to do, ban you? What do you have to lose, your account?

WallStreetBets currently has Reddit’s blessing. The group’s activities are within “the bounds of our content policy,” Steve Huffman, Reddit’s C.E.O., said in an interview on the app Clubhouse, describing an “intelligence” masked by an “idiot swagger.” They’re waging a “culture war,” he said, and one he seems to like. In other words, he’s in on their joke — for now.