The phone at Bob Long’s home in Brookfield, Wis., has rung too many times these last few years, but especially in 2020. Some calls came from former teammates telling Long, a Packers receiver in the mid-1960s, that another member of their Vince Lombardi-era dynasty squads had died. Many others came from Green Bay fans, phoning to express their condolences.

Gone, all of them.

The last four, who died over a nine-month span last year, are enshrined in the Pro Football Hall of Fame, royalty in an organization steeped in tradition. Together, the names evoke a wistful yearning for the teams that won five championships — including the first two Super Bowls — under Lombardi from 1961 to 1967.

As the Packers chase a 14th N.F.L. title, a quest that continues Sunday against the Tampa Bay Buccaneers in the N.F.C. championship game at Lambeau Field, the deaths — and that of Ted Thompson, the general manager who drafted Aaron Rodgers and many other current Packers, on Wednesday — have freighted a glorious season with solemnity. Occurring in such swift succession, they stripped the facade of invincibility from titans of the sport, devastating the teammates left to mourn their friends from afar.

“It snaps you back into reality,” said Dave Robinson, a Hall of Fame linebacker on Lombardi’s last three Packers championship teams. “We live in a fantasyland. Everything’s always been good or great — you play ball, you won your share of games, you won championships and were at the very top of your game. Nothing can go wrong. Then you get older and start losing teammates and realize how fragile life is. And you keep looking in the mirror saying, ‘Will I be next?’”

In the last 27 months, nine starters from the 1965 championship team — nearly half — have died. The bruising fullback Jim Taylor and the sturdy left tackle Bob Skoronski did so within two weeks of each other in October 2018. As if following one of his powerful blocks, quarterback Bart Starr, an in-the-huddle extension of Lombardi, died a month after right tackle Forrest Gregg in spring 2019. 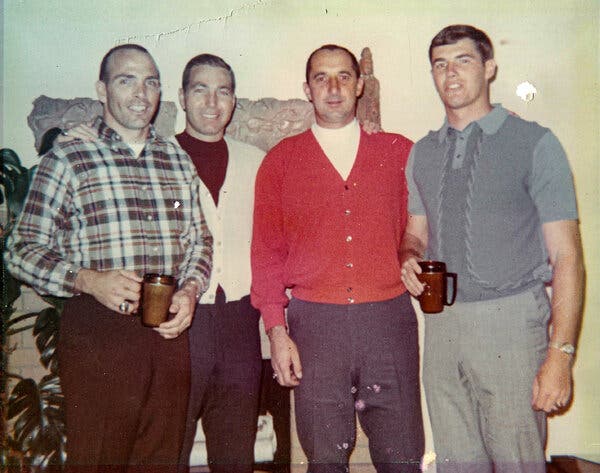 Starr’s death lacerated Bill Curry, his former center. The day Curry, now 78, reported to his first Packers training camp, as a rookie in 1965, he sensed someone else walking to dinner beside him. It was Starr, by then entering his 10th season, and from then on, Curry said, rarely did they leave each other’s side. Another dear friend, the backup quarterback Zeke Bratkowski, died in November 2019, and the bad news kept mounting.

Reflecting on all the losses, Curry was surprised to realize that he had ascribed a superhuman quality to so many of these men, but the mind remembers what it wants to remember: Hornung, the playboy running back, so young and virile, zigzagging for touchdowns instead of suffering from dementia; Wood, the rangy free safety, picking off Len Dawson to fuel Green Bay’s rout of Kansas City in Super Bowl I instead of deteriorating as his cognitive functions declined; Davis, a fearsome pass rusher who never missed a game during his 10 seasons in Green Bay, dragging down quarterbacks instead of fading from kidney failure.

“I guess if I had thought about it, or if somebody had warned me, I would have maybe protected myself,” Curry said. “But you begin to think of certain people, like Forrest Gregg or Bart Starr or Willie Davis, as indestructible. So when they die, it’s not like a regular death. It’s like a punch to the sternum. I mean, it drops you to your knees. No, no, he can’t be dead. Well, he is.”

The Packers’ president, Mark Murphy, added: “It’s like your parents. You never expect them to die.”

The immortals live on in video clips and in photographs, but what endures for their teammates is what makes their absences so much harder to bear: the intimate moments they shared, the ones that unfolded away from public view. From Wood, Robinson gleaned the importance of learning everyone’s assignment on defense, not just his own. Long still can’t fathom that Hornung once told him he’d be a superstar. Curry credits Davis with transforming his life.

Curry, who called himself a “snot-nosed white kid” from outside Atlanta, had never played on an integrated team before joining the Packers, he said. Insecure, he worried how the team’s Black players would react to his Georgia accent. Instead, he was humbled by Wood’s kindness and how Davis, the defensive captain, promised to help Curry — the next to last pick in the 20-round draft — make the team.

Whenever he felt like capitulating, his confidence frayed by Lombardi’s withering words, Curry ran to the defensive side to find Davis, whom he called Dr. Feelgood. With a smile, Davis told Curry to feel good, that he could do it.

“It was an unexpected, undeserved, unrewarded act of kindness from a great leader, and those moments change lives,” said Curry, who would go on to coach 26 years in college football and the N.F.L. “I had no choice but to respond to that. I never looked at human beings, any human being, in the same way again that I had previously. And when I began to coach, it was my primary mission to be sure that nobody on our team ever felt the sting of racism in our locker room.”

Bill Curry, the former N.F.L. player and coach, spoke at a memorial service for the Hall of Fame quarterback Bart Starr in 2019.Credit…Butch Dill/Associated Press

In an era of racial intolerance, it was Lombardi’s commitment to equality that galvanized the team. Welcoming Black players at a time when so many of his peers didn’t, Lombardi — whose disgust for discrimination was personal, having been bullied for his Italian heritage and for being Catholic while growing up in Brooklyn — created what the former tight end Marv Fleming called “a brotherhood.”

Those relationships bound players across the decades, even when they rarely saw one another. Fleming, when reached last week, said he had just finished a video call, arranged by the Packers, with some old teammates.

“It made me want to shed a tear,” Fleming said. “I’m 79 years young, I’m still skateboarding in Venice. But to hear, ‘Marvin, have you heard about so-and-so’ and you say, ‘oh no,’ those memories come back, those times when we were in the foxhole together.”

A member of the Hall of Fame’s board of trustees for more than 20 years, Robinson, 79, who lives in Akron, Ohio, would always welcome old teammates and their wives in Canton, Ohio, for induction-weekend festivities. Reminiscing with them there, or at reunions and alumni functions arranged by the Packers, made him feel young again, he said, even if the players’ numbers were dwindling.

“We’d get together every now and then, but it’s not the same,” Robinson said. “Every year it used to take a big table to sit us down. Now we can just sit around a coffee table.”

Except when they can’t. The pandemic canceled the Packers’ traditional alumni gatherings, from golf tournaments to weekends at Lambeau, where, under normal circumstances, former greats would have been invited back to serve as honorary captains on Sunday. It has also deprived family and friends of traditional funeral rituals, upending a grieving process that helps the living cope and mourn.

Curry thought he knew Bratkowski well. But at his funeral service, Curry learned he went to Mass every morning and did volunteer work afterward. Sending flowers or a card has rendered the players’ grief incomplete.

Vince Lombardi, left, and the team’s backup quarterback, Zeke Bratkowski, celebrated in the Packers’ dressing room after an N.F.L. playoff game against the Baltimore Colts in the 1965 season.Credit…Associated Press

“There was so much more to him, and you only learn that if you listen to family and priests and ministers talk about the person,” Curry said, adding: “I don’t want to do a Zoom service. I want to be there next to the family. I want to be with the remains of my friend, and I can’t do it. And that has really bothered me. It’s pure selfishness, but I’d give anything to be able to go.”

Robinson said the memorial service for Adderley had been rescheduled a few times, in accordance with local guidelines for gatherings. Helping to anchor the left side of the Packers’ defense, the two men helped write a book, “Lombardi’s Left Side,” which also detailed their experiences playing in the racially charged 1960s.

“Me and Herb,” Robinson said, “we were like two fingers in a fist.”

It was their deep friendship that compelled Robinson to place a call to Wisconsin after Adderley died on Oct. 30. Troubled by health problems in recent years — a stroke, open-heart surgery — Long thanked his old friend for notifying him. They talked for a little while longer, and when he hung up he hoped it wouldn’t ring again soon.