WASHINGTON — As soon as this city began offering Covid vaccines to residents 65 and older, George Jones, whose nonprofit agency runs a medical clinic, noticed something striking.

“Suddenly our clinic was full of white people,” said Mr. Jones, the head of Bread for the City, which provides services to the poor. “We’d never had that before. We serve people who are disproportionately African-American.”

Similar scenarios are unfolding around the country as states expand eligibility for the shots. Although low-income communities of color have been hit hardest by Covid-19, health officials in many cities say that people from wealthier, largely white neighborhoods have been flooding vaccination appointment systems and taking an outsized share of the limited supply.

People in underserved neighborhoods have been tripped up by a confluence of obstacles, including registration phone lines and websites that can take hours to navigate, and lack of transportation or time off from jobs to get to appointments. But also, skepticism about the shots continues to be pronounced in Black and Latino communities, depressing sign-up rates.

Early vaccination data is incomplete, but it points to the divide. In the first weeks of the rollout, 12 percent of people inoculated in Philadelphia have been Black, in a city whose population is 44 percent Black.In Miami-Dade County, just about seven percent of the vaccine recipients have been Black, even though Black residents comprise nearly 17 percent of the population and are dying from Covid-19 at a rate that is more than 60 percent higher than that of white people. In data released last weekend for New York City, white people had received nearly half of the doses, while Black and Latino residents were starkly underrepresented based on their share of the population.

And in Washington, 40 percent of the nearly 7,000 appointments initially made available to people 65 and older were taken by residents of its wealthiest and whitest ward, which is in the city’s upper northwest section and has had only five percent of its Covid deaths.

“We want people regardless of their race and geography to be vaccinated, but I think the priority should be getting it to the people who are contracting Covid at the highest rates and dying from it,” said Kenyan McDuffie, a member of the City Council whose district is two-thirds Black and Latino.

Alarmed, many cities are trying to rectify inequities. Baltimore will offer the shot in housing complexes for the elderly, going door-to-door.

“The key with the mobile approach is you can get a lot of hard-hit folks at the same time — if we just get enough supply to do that,” said the city’s health commissioner, Dr. Letitia Dzirasa.

Officials in Wake County, N.C., which includes Raleigh, are first attempting to reach people 75 and over who live in nine ZIP codes that have had the highest rates of Covid. “We weren’t going to prioritize those who simply had the fastest internet service or best cell provider and got through fastest and first,” said Stacy Beard, a county spokeswoman.

Fixing the problem is tricky, however. Officials fear that singling out neighborhoods for priority access could invite lawsuits alleging race preference. To a large extent, the ability of localities to address inequities depends on how much control they have over their own vaccine allocations and whether their political leadership aligns with that of supervising county or state authorities.

The experiences of Dallas and the District of Columbia, for example, have resulted in very different outcomes. Dallas County, predominantly Democratic, has been thwarted by the state health department, under the aegis of a Republican governor, which quashed the county’s plan to give vaccines to certain minority neighborhoods first. But Washington was able to quickly course-correct. 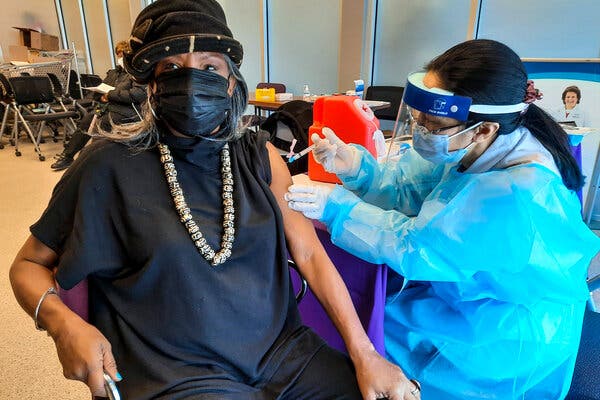 A few days after its 65-and-older population became eligible for the vaccine on Jan. 11, Mr. McDuffie, the city councilman in the District of Columbia, flagged the issue of wealthier residents getting disproportionate access to the vaccine in a call with city officials. Overall, 74 percent of deaths and 48 percent of cases in Washington have been among Black residents, who make up 46 percent of the population; 11 percent of deaths and 25 percent of cases have been among white residents, who make up nearly the other half of the district.

By the end of that week, the city announced a new policy — offering the first day of new appointments to people in ZIP codes with the highest rates of infection and death from the virus. Under the new system, more appointments would be added a day later and people from other neighborhoods could sign up then. The city also quadrupled the number of workers helping people make appointments through its call center, to 200.

But email lists in wealthier neighborhoods lit up in protest. 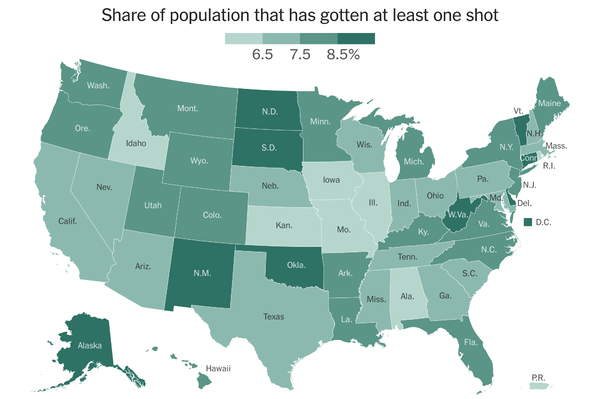 See How the Vaccine Rollout Is Going in Your State

See where doses have gone, and who is eligible for a shot in each state.

“It looked like maybe Ward 3 was being punished for being more computer savvy,” said Mary Cheh, a city council member representing the ward, where houses in neighborhoods near American University or the Potomac River routinely sell for more than $2 million. “I was inundated with emails from people who were just really angry about it.”

The day after the policy change, Ms. Cheh wrote to her constituents, citing the data about the shots and saying that “our anxiety to get one right away should not cloud the pursuit of equitable vaccine distribution.”

“When I sent out that note, people said, ‘Oh thank you, I understand now,’” Ms. Cheh said. Still, she called the city’s new system “a very blunt instrument,” and said it would be fairer to base need on an individual’s risk, not an entire neighborhood’s.

Adora Iris Lee, 70, lives in one of Washington’s priority neighborhoods — Congress Heights, part of Ward 8 in the district’s southern area, which is heavily Black and has had the highest number of Covid deaths. She said she still had spent more than three hours on hold, but obtained appointments for herself and her mother, who is 93.

Still, Mr. Jones, of Bread for the City, said that even with the new system, hardly any of the people coming for shots at his clinic were its regular patients. The clinic started reaching out to its regulars and, with the city’s permission, reserved all its first doses for them and for clients of other social service organizations last week.

“It’s not just a case of preserving the spots for people,” Mr. Jones said. “Somehow we’ve got to persuade them to use those spots.”

Dallas County’s rollout plans for the vaccine included an inoculation hub in a neighborhood that is largely African-American and Latino. But when the sign-up website went live, the link speedily circulated throughout white, wealthier districts in North Dallas.

“Instead of getting a diverse sampling, we had a stampede of people who were younger and healthier than those who had initially gotten the links,” said Judge Clayton Jenkins, head of the Dallas County Commissioners Court. Observers told commissioners that those in line were overwhelmingly white.

The county commissioners quietly contacted Black and Latino faith leaders in South Dallas, who encouraged constituents to show up for shots without appointments, as long as they offered proof that they were 75 and older.

That plan worked for a day or so.

“Then city council people in North Dallas got calls and the mayor said it would be open to everyone over 75,” Judge Jenkins said. “That led again to a huge stampede of people from the suburbs who had reliable cars.”

John Wiley Price, a Dallas commissioner who represents voters in South Dallas, argued that the 27,000 people who had signed up from 11 vulnerable ZIP codes should be given the vaccine ahead of other neighborhoods. Already, more than 300,000 Dallas County residents had registered; The county was only receiving a weekly allocation of about 9,000 doses.

But when Judge Jenkins inquired whether geographical priority would pass muster, state officials said that if Dallas proceeded with the plan, the state would withhold the county’s supply.

According to a state health department spokesman, inoculation hubs had to agree to vaccinate any Texan, because not every county has a site. If Dallas excluded residents by geography, providers would be in breach of contract.

Persuading people to get the shot

Even successful efforts to target impoverished neighborhoods are running into another problem. Many Black and Latino people are hesitant to get the vaccine.

In Colorado, 1 of 16 white residents have received the vaccine so far, compared to 1 of 50 Latinos, who comprise 20 percent of the state’s population, according to a Colorado Springs newspaper, The Gazette.

“There are a lot of Chicanos who are like, ‘I want to wait, I have questions, I need some answers,’ ” said Julie Gonzales, a state senator from Denver, who starts her workday sending condolences to constituents, many of them Latino, who have lost family members to the virus.

Public health experts and outreach campaigns need to be attuned to cultural nuances that differ among Latino generations, Ms. Gonzales said. “It’s one thing to speak to an old-school Chicano who has been here for generations versus someone who is concerned about whether I.C.E. can find out their personal information if they try to get the vaccine,” she said, referring to the federal Immigration and Customs Enforcement agency.

A tracking poll by the Kaiser Family Foundation, conducted just before President Biden took office, found that while the share of people overall who wanted to get the vaccine as soon as possible has increased since December, 43 percent of Black adults and 37 percent of Hispanic adults said they wanted to “wait and see how it’s working,” compared with 26 percent of white adults.

When initial statistics in Philadelphia showed that only 12 percent of vaccine recipients were Black, city health officials recoiled. Blindsided by an inexperienced start-up company whose vaccination strategies faltered, health officials also attributed the low numbers to hesitation among city nursing home workers and hospital aides, many of whom are Black.

Now that the city has expanded eligibility, it is hopeful that the distribution will become more equitable. The vaccine is going to residents with high-risk medical conditions, as well as first responders, people who work in public transit and those in retail and food service jobs who come into contact with the public.

“Many of these are people who are paid less, tend to be from communities of color and are at high risk because they are exposed to lots of people,” said James Garrow, a spokesman for the Philadelphia Department of Public Health.

Dallas has a new bilingual call center. Still, according to the latest county data, white people, who make up 28.5 percent of Dallas’s population, have gotten 62.6 percent of its vaccine doses.

Even in Washington, D.C., frustrations linger despite clear progress. Last week, city officials announced results of their tweaked distribution plan: Just over half of shots have now gone to residents of neighborhoods given priority, up from 29.6 percent during the first week that older people were vaccinated.

Yet, during a daylong session last week, council members heard pained accounts from people like Janett Gasaway, 77, who still has not been able to get vaccine appointments for herself or her 89-year-old husband. Despite multiple calls — she on their landline, he on his cellphone — on the days that appointments are offered to the most vulnerable ZIP codes, they haven’t succeeded. On Thursday, 1,745 appointments were gone in 18 minutes.

“It is not working,” she said.