PARIS — Romain Rozier’s cafe should be bankrupt by now.

Since the coronavirus hit last spring, sales at the once buzzing lunch spot in northern Paris are down 80 percent. The only customers on a recent day were a couple of UberEats couriers and a handful of people spaced far apart at the counter, ordering takeout.

France and other European countries are spending enormous sums to keep businesses afloat during the worst recession since World War II. But some worry they’ve gone too far; bankruptcies are plunging to levels not seen in decades.

While the aid has prevented a surge in unemployment, the largess risks turning swaths of the economy into a kind of twilight zone where firms are swamped with debt they cannot pay off but receiving just enough state aid to stay alive — so-called zombie companies. Unable to invest or innovate, these firms could contribute to what the World Bank recently described as a potential “lost decade” of stagnant economic growth caused by the pandemic.

“We need to get off of all of these subsidies at some point — otherwise, we’ll have a zombie economy,” said Carl Bildt, co-chair of the European Council on Foreign Relations and a former prime minister of Sweden.

Bankruptcies fell 40 percent last year in France and Britain, and were down 25 percent on average in the European Union. Without government intervention, including billions in state-backed loans and subsidized payrolls, European business failures would have almost doubled last year, according to a study by the National Bureau of Economic Research, a private American organization.

At the Commercial Court of Paris, Judge Patrick Coupeaud, who has handled bankruptcy cases for nearly a decade, sees the difference. “I have about a third fewer people coming to me, because many troubled businesses are being helped by the state,” he said, gesturing to the court’s nearly empty colonnaded marble halls. 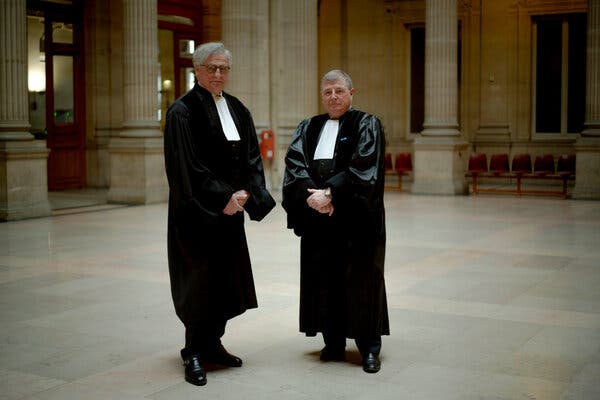 Judges Dominique-Paul Vallée, left, and Patrick Coupeaud. “Failure is not a word that the French like to use,” Judge Vallée said.Credit…Sabine Mirlesse for The New York Times

By contrast, Chapter 11 bankruptcy filings in the United States rose in the third quarter to the highest level since the 2010 financial crisis, a trend that is expected to continue in 2021, according to an index compiled by the U.S. law firm Polsinelli.

President Biden has proposed a new $1.9 trillion rescue package to combat the economic downturn and the Covid-19 crisis, and last week, the government reported that 900,000 Americans had filed new unemployment claims.

Those statistics are shaping a debate over whether Europe’s strategy of protecting businesses and workers “at all costs” will cement a recovery, or leave economies less competitive and more dependent on government aid when the pandemic recedes.

“Parts of the misery have only been delayed,” said Bert Colijn, chief eurozone economist at the Dutch bank ING. He added that there would be “a catch-up in bankruptcies” and a spike in unemployment whenever support measures were withdrawn.

Analysts say the government programs are already seeding the economy with thousands of inefficient businesses with low productivity, high debt and a high prospect of default once low interest rates normalize.

An estimated 10 percent of companies in France were saved from bankruptcy because of government funds, according to Rexecode, a French economic think tank.

Letting unviable businesses go under, while painful, will be essential for allowing competitive sectors to thrive, said Jeffrey Franks, the head of the International Monetary Fund’s mission for France.

A wave of bankruptcies “is not something that’s necessarily so bad,” he said. “It’s part of the normal creative destruction process of regenerating economies.”

The Organization for Economic Cooperation and Development is urging governments to fine-tune their support measures to ensure a revival in growth. “Failure to do so could hinder the recovery by trapping resources in nonproductive ‘zombie firms’ and jobs,” the organization said in a recent assessment.

Most European governments planned to end support last autumn, figuring the coronavirus would be under control. But a second wave of cases has filled hospitals, followed by faster-spreading variants of the virus, all leading to extensions in aid. The European Union late last year approved a recovery package worth €2 trillion.

In France, the investments are seen as a way of buying social stability by preventing mass unemployment. The finance minister, Bruno Le Maire, has pledged to maintain the support “as long as the crisis lasts,” a strategy that he described as adding “spirituality” to the economy.

Almost no businesses are being left out of the largess if they lobby hard enough — not even French escargot farmers, who recently won a battle for limited financial aid while restaurants that are their main buyers stay closed.

Judges preparing to meet at the Commercial Court of Paris. Government funds have saved one in 10 companies in France, a think tank estimated.Credit…Sabine Mirlesse for The New York Times

As governments’ Covid debts skyrocket, European fiscal rules have been suspended. France is among several countries declaring that they don’t plan to pay down the enormous bill until the economy has mended.

For now, financial aid is preventing the collapse of many once-healthy firms whose main misfortune was the pandemic. At the Paris Commercial Court, Judge Coupeaud said the measures had helped avoid a domino effect by encouraging businesses to use state-backed loans and other aid to pay suppliers and debts.

France’s bankruptcy system is unlike those in other countries, in that it encourages troubled companies to come forward before default and offers help in negotiating with creditors.

“Failure is not a word that the French like to use,” said Dominique-Paul Vallée, the judge at the court in charge of helping business owners avoid bankruptcy. “We prefer to say we are saving companies.” He added that there had been a sharp rise in firms going to him for help.

Those that did file for bankruptcy protection in 2020 tended to be big companies with large work forces, such as the retailer Camaïeu, with 3,900 workers, and Alinea, a furniture maker with 2,000 employees. That was a shift from the small and medium-size business cases that the court typically hears.

Still, the safety net extends only so far. Countless businesses face mounting debts, declining profitability and a limited capacity to invest the longer the pandemic lasts.

Mr. Rozier is a case in point. He started his organic-themed cafe, Make Your Lunch, in 2016 in a bustling business and cultural district. The concept was so successful that he opened a second cafe near the high-traffic Paris Opera.

After the pandemic hit, business plunged as offices that housed thousands of workers stood empty and remained largely unoccupied most of the year.

The government helped pay the bulk of his employees’ salaries, and Mr. Rozier got a low-interest €30,000 state-backed loan with payments deferred until May, which the government last week extended for a year. After a new national lockdown in October, restaurants like his got an additional €10,000 a month in direct aid.

At the Commercial Court of Paris, Judge Coupeaud said, “I have about a third fewer people coming to me.”Credit…Sabine Mirlesse for The New York Times

But that money hasn’t made up for months of lost sales. “My treasury is drained,” said Mr. Rozier, who sold his cafe near the opera in the summer and spent much of the government loan paying off suppliers. With 80 percent fewer clients, he is three months behind on his €4,000 monthly rent, and he struggles to pay social security taxes, electricity and other expenses.

The government allows restaurants to offer takeout only. Mr. Rozier has become an unofficial spokesman for restaurant owners who demand that the government let them seat patrons again, with social distancing, to survive.

After the New Year’s holiday break, he said, his morale slumped when he reopened the business.

“At this point, there is a real danger I will have to close within a couple of months,” he continued. “I’d rather sell the business than have to go to bankruptcy court.”

“There are many more that will follow in their footsteps,” Mr. Rozier said. “That we know for sure.”