The steady drumbeat of reports about new variants of the coronavirus — first in Britain, then in South Africa, Brazil and the United States — have brought a new worry: Will vaccines protect against these altered versions of the virus?

The answer so far is yes, several experts said in interviews. But two small new studies, posted online Tuesday night, suggest that some variants may pose unexpected challenges to the immune system, even in those who have been vaccinated — a development that most scientists had not anticipated seeing for months, even years.

The findings result from laboratory experiments with blood samples from groups of patients, not observations of the virus spreading in the real world. The studies have not yet been peer-reviewed.

But experts who reviewed the papers agreed that the findings raised two disturbing possibilities. People who had survived mild infections with the coronavirus may still be vulnerable to infection with a new variant; and more worryingly, the vaccines may be less effective against the variants.

Existing vaccines will still prevent serious illness, and people should continue getting them, said Dr. Michel Nussenzweig, an immunologist at Rockefeller University in New York, who led one of the studies: “If your goal is to keep people out of the hospital, then this is going to work just fine.”

But the vaccines may not prevent people from becoming mildly or asymptomatically infected with the variants, he said. “They may not even know that they were infected,” Dr. Nussenzweig added. If the infected can still transmit the virus to others who are not immunized, it will continue to claim lives.

The vaccines work by stimulating the body to produce antibodies against the coronavirus. Scientists had expected that over time, the virus may gain mutations that allow it to evade these antibodies — so-called escape mutations. Some studies had even predicted which mutations would be most advantageous to the virus.

But scientists had hoped that the new vaccines would remain effective for years, on the theory that the coronavirus would be slow to develop new defenses against them. Now some researchers fear the unchecked spread has given the virus nearly unfettered opportunities to reinvent itself, and may have hastened the appearance of escape mutations.

The studies published on Tuesday night show that the variant identified in South Africa is less susceptible to the antibodies created by natural infection and by vaccines made by Pfizer-BioNTech and Moderna. 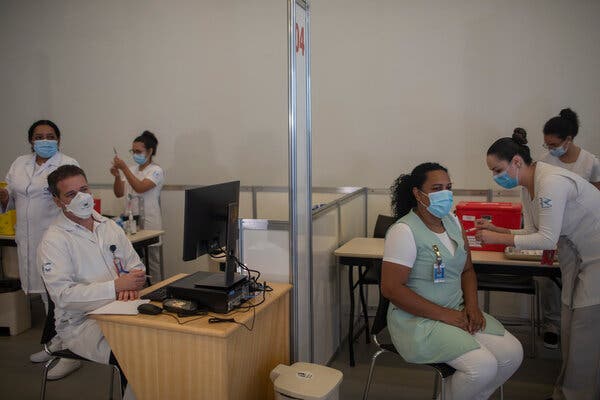 Vaccinations of nurses, doctors and health professionals in São Paulo, Brazil, this week.Credit…Victor Moriyama for The New York Times

Neither the South African variant nor a similar mutant virus in Brazil has yet been detected in the United States. (The more contagious variant that has blazed through Britain does not contain these mutations and seems to be susceptible to vaccines.)

Fears that the vaccines would be powerless against new variants intensified at a scientific conference held online on Saturday, when South African scientists reported that in laboratory tests, serum samples from 21 of a group of 44 Covid-19 survivors did not destroy the variant circulating in that country.

The samples that were successful against the variant were taken from patients who had been hospitalized. These patients had higher blood levels of so-called neutralizing antibodies — the subset of antibodies needed to disarm the virus and prevent infection — than those who were only mildly ill.

The results “strongly, strongly suggest that several mutations that we see in the South Africa variant are going to have a significant effect on the sensitivity of that virus to neutralization,” said Penny Moore, a virologist at the National Institute for Communicable Diseases in South Africa who led the study.

The second study brought better tidings, at least about vaccines.

The researchers saw a slight decrease in antibody activity directed against engineered viruses with three of the key mutations in the variant identified in South Africa. That result was significant “because it’s seen in just about every individual tested,” Dr. Nussenzweig said. Still, it “is not something that we should be horribly freaked out about.”

In most people, infection with the coronavirus leads to a strong immune response; the vaccines seem to induce an even more powerful response. Two doses of the vaccines from Pfizer and Moderna, at least, produce neutralizing antibodies at levels that are higher than those acquired through natural infection.

Even if antibody effectiveness were reduced tenfold, the vaccines would still be quite effective against the virus, said Jesse Bloom, an evolutionary biologist at the Fred Hutchinson Cancer Research Center in Seattle.

In Liverpool, England, people lined up to receive a coronavirus test at a recreational tennis center last year.Credit…Mary Turner for The New York Times

And while neutralizing antibodies are essential for preventing infection, the vaccines — and natural infection — also lead to production of thousands of other types of antibodies, not to mention various immune cells that retain a memory of the virus and can be roused to action when the body encounters it again.

Even when confronted with variants, those other components of the immune system may be enough to prevent serious illness, said Florian Krammer, an immunologist at the Icahn School of Medicine at Mount Sinai in New York. In clinical trials, the vaccines protected people from illness after just one dose, when the levels of neutralizing antibodies were low or undetectable, he noted.

Vaccine trials being conducted in South Africa by Novavax and Johnson & Johnson will provide more real-world data on how the vaccines perform against the new variant there. Those results are expected within the next few weeks.

All viruses mutate, and it’s no surprise that some of those mutations sidestep the body’s immune defenses, experts said. Each new host affords a virus fresh opportunities to amass and test mutations by slightly scrambling the sequence of RNA letters in its genetic code.

“The beauty, the elegance, the evolution and the magnificence of a virus is that every single time it infects a person, it’s exploring that sequence space,” said Paul Duprex, director of the Center for Vaccine Research at the University of Pittsburgh.

Some mutations don’t improve on the original, and fade away. Others add to the pathogen’s power, by making it more contagious — like the variant first identified in Britain — more fit, or less susceptible to immunity.

The mutations in the variant circulating in South Africa, called B.1.351, have independently emerged more than once, and all together, suggesting that they work in concert to benefit the virus.

The key mutation, called E484K,and two of its companions alter the shape of a part of the virus that is crucial for immune recognition, making it difficult for antibodies to attach themselves to the virus. The trio popped up in several lab studies that tried to predict which mutations would be advantageous to the virus.

“I think we need to monitor mutations closely and look out for things like that that could be becoming dominant in certain parts of the world,” said Akiko Iwasaki, an immunologist at Yale University.

Britain detected the more contagious variant circulating there because it sequences more virus samples than any other nation. The United States lags far behind: It has sequenced about 71,000 samples so far, a tiny proportion of the millions infected in the country. But the Centers for Disease Control and Prevention plans to work with state and local public health labs to sequence as many as 6,000 samples per week, agency scientists said Friday.

It will be important to limit travel — and the import of variants — from other countries until a majority of the population is immunized, said John Moore, a virologist at Weill Cornell Medicine in New York.

“Even if they are already here, the more often they are reintroduced, the more likely there could be a super-spreader event,” Dr. Moore said. (President Joseph R. Biden Jr. plans to sustain existing travel restrictions on anyone who has recently traveled to Europe and Brazil.)

The mRNA technology on which the Pfizer and Moderna vaccines rely can be altered in a matter of weeks, and far more easily than the process used to produce flu vaccines. But it would be wise to prepare for this eventuality now and think through not just the technical aspects of updating the vaccines, but the testing, approval and rollout of those vaccines, experts said.

Still, the best path forward is to prevent the emergence of new mutations and variants altogether, they said.

“Imagine having to do catch-up like this all the time — it’s not something desirable,” Dr. Iwasaki said. “If we can just stop the spread as soon as possible, while the vaccine is very effective, that’s the best way.”