EL HUSSEINEYA, Egypt — A cry pierced the night from the balcony of an Egyptian hospital. A nurse was screaming that the patients in the Covid intensive care unit were gasping for air.

Ahmed Nafei, who was standing outside, brushed past a security guard, dashed in and saw that his 62-year-old aunt was dead.

Furious, he whipped out his phone and began filming. It appeared that the hospital had run out of oxygen. Monitors were beeping. A nurse was visibly distressed and cowering in a corner as her colleagues tried to resuscitate a man using a manual ventilator. 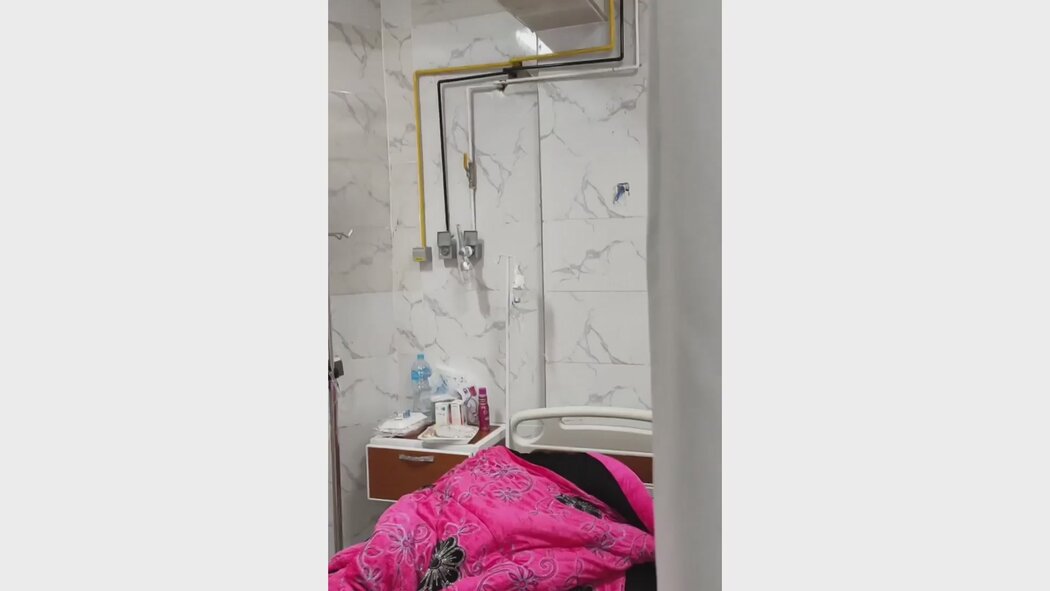 Mr. Nafei’s 47-second video this month of the chaos at El Husseineya Central Hospital, about two and a half hours northeast of Cairo, went viral on social media.

As outrage grew, the government denied that the hospital had run out of oxygen.

An official statement issued the following day concluded that the four who died had suffered from “complications” and denied that the deaths had “any connection” to an oxygen shortage. Security officers interrogated Mr. Nafei, and officials blamed him for violating rules barring visitation and filming inside hospitals.

Witnesses, including medical staff and relatives of patients, said in interviews that the oxygen pressure had fallen to precipitously low levels. At least three patients, they said, and possibly a fourth, had died of oxygen deprivation. A close analysis of the video by doctors in Egypt and the United States confirmed that the chaotic scene in the I.C.U. indicated an interruption in the oxygen supply.

The fatal oxygen shortage was the end result of a cascade of problems at the hospital, our investigation found. By the time patients were suffocating in the I.C.U., a relief delivery of oxygen that had been ordered was already hours late and a backup oxygen system had failed.

“We’re not going to bury our heads in the sand and pretend everything is OK,” a doctor at the hospital said, speaking on condition of anonymity because he feared arrest. “The whole world can admit there’s a problem, but not us.”

The government’s rush to deny the episode is only the latest example of the lack of transparency in its response to the Covid crisis, which has led to cynicism and distrust of its public assurances.

For many Egyptians, Mr. Nafei’s video offered a rare and uncensored view of the coronavirus’s real toll at the peak of Egypt’s second wave of the pandemic.

The government acknowledged that four people in the intensive care ward died that day, Jan. 2, but denied that it was because of an oxygen shortage. 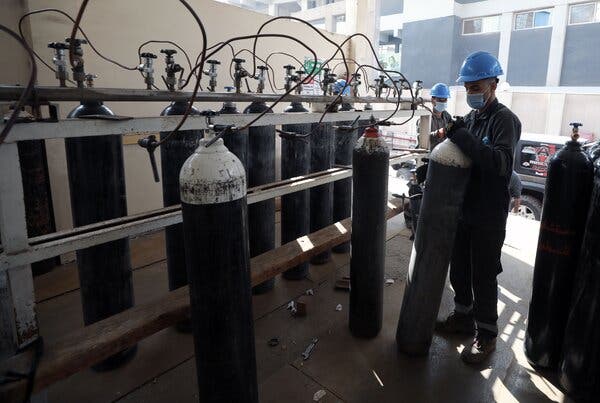 Oxygen cylinders at a factory in Cairo this month. The Egyptian government has denied that there are oxygen shortages in the country’s hospitals.Credit…Khaled Elfiqi/EPA, via Shutterstock

The Health Ministry statement said that the patients who died were mostly elderly, that they died at different times and that at least a dozen other patients, including newborns in incubators, were linked to the same oxygen network and were not affected. Those factors, it said, confirmed “the lack of a connection between the deaths and allegations made about a shortage of oxygen.”

Medical staff verified that the hospital’s oxygen supply had not been completely depleted, but said that the pressure was dangerously low. It was even worse in the intensive care unit, they said, and insufficient to keep patients alive. I.C.U. vents may have been at the end of the network, they explained, or the pipeline may have had other inefficiencies.

Efforts by hospital staff to address the shortage were thwarted by further breakdowns. When they tried to switch the oxygen supply in the I.C.U. from the hospital’s main tank to the backup reserve, the reserve system appeared to be overloaded and failed.

Earlier in the day, aware that they were running low, hospital officials had requested more oxygen from the Health Ministry. But the delivery truck, which was due in the afternoon, arrived more than three hours late.

“If it had arrived by 6 p.m., none of this would have happened,” the hospital doctor said.

The medical experts who analyzed the video, including six doctors in the United States and Egypt, spotted details that support the finding of an oxygen failure.

In the video, none of the patients appear to be connected to the central oxygen line.

One doctor is using a portable tank, typically used in emergencies and only temporarily. And just a few feet away, a group of nurses are seen trying to resuscitate a patient with a manual pump that does not appear to be connected to an oxygen source.

“There’s no oxygen tube connected to the airbag,” said Dr. Hicham Alnachawati, a New York urgent care physician who has worked in hospital I.C.U.s. “He’s being given free air, basically. It doesn’t happen. It’s impossible unless you have no oxygen.” 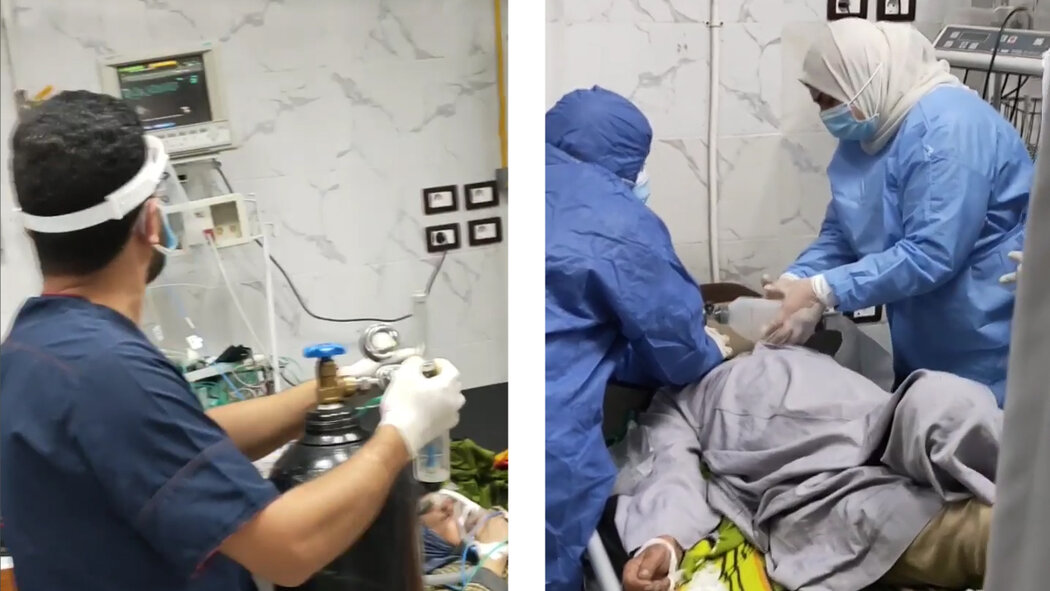 A clip from a video posted online reveals an Egyptian Covid ward in crisis. /Ahmed Nafei via FacebookCredit

Another doctor who reviewed the video, Dr. Bushra Mina, the Egyptian-American chief of pulmonology at Lenox Hill Hospital who has cared for hundreds of Covid-19 patients in New York, noted the “urgency” of the doctor and nurses in the video “trying to get emergency oxygen supply or supplementation to the patients.”

“It can be overwhelming, even in the U.S., where you have a lot of resources,” Dr. Mina said. “So imagine Egypt, where resources are limited and you’re beyond your capacity.”

The oxygen crisis at El Husseineya Central Hospital may not have been the only one.

Signs of shortages at other hospitals flooded social media for a week. One hospital director issued a plea on social media for people to donate portable oxygen tanks, citing a “critical need.” A patient in a different hospital filmed himself in the isolation ward saying, “We don’t have enough oxygen.” And video of a scene similar to the one that Mr. Nafei had witnessed circulated online.

These claims could not be independently verified.

“Is there a real problem?” asked Ayman Sabae, a researcher at the Egyptian Initiative for Personal Rights, a human rights group. “No one can claim to have that information except the government.”

The government’s record during the crisis has not inspired confidence that it is leveling with Egyptians.

President Abdel Fattah el-Sisi has denounced critics of government coronavirus efforts as “enemies of the state.” His security services expelled a foreign journalist who questioned the official toll. The public prosecutor has warned that anyone spreading “false news” about the coronavirus faces up to five years’ imprisonment.

And the government has engaged in a bitter feud with doctors, who revolted earlier in the pandemic over a lack of protective equipment. A number of the doctors were thrown in jail.

Instead, when the video of El Husseineya Central Hospital emerged, the response amounted to telling Egyptians not to believe what they saw.

“This is not a scene that shows a shortage in oxygen,” said Mamdouh Ghorab, the governor of Al Sharqiya, the governorate that includes El Husseineya Central Hospital. He was speaking on a pro-government television program that did not interview or invite any witnesses to challenge the official narrative.

Even the official numbers are suspect. Egypt has reported over 150,000 Covid cases and over 8,000 deaths, remarkably low numbers for the region and for a country of over 100 million people.

But outside experts and even some government officials say that both figures are vast undercounts, mainly because of lack of widespread testing and because the labs that do test do not always report their results to the government.

Even as it denied the oxygen shortage at El Husseineya Central, officials began to take steps to address the problem, tacitly acknowledging it.

The minister of health, Hala Zayed, acknowledged a shortage of oxygen delivery trucks and delays in distribution. President Sisi asked the government to double the production of oxygen in order to meet the spike in demand.

The government took another action apparently in response to the video of the crisis in El Husseineya Central. Visitors are now required to leave their phones at the door.